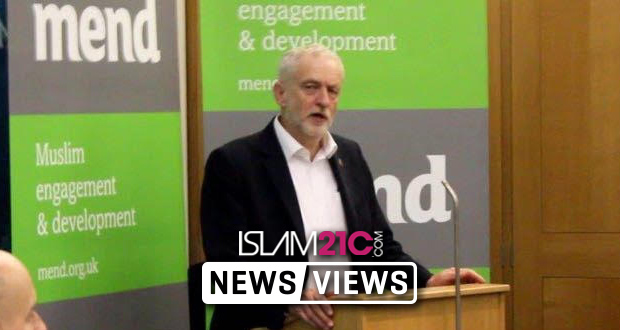 An array of speakers and organisations lined up to support the event hosted by Stephen Kinnock MP, including MPs, NUS, Byline Media, Spinwatch and Hacked Off.

The evening started with a discussion of the controversy surrounding the event that had led to several MPs pulling out.[1] Stephen Kinnock tackled this head-on by disclosing that he had come under immense criticism and pressure to withdraw but had decided to continue since he believed in the good work that Mend were undertaking. He asked Mend to reflect on the criticism levelled against them.

Wes Streeting echoed his colleague’s experience but added that he had stood firm due to the importance of stamping out anti-Muslim hatred in our society. He added that some of the criticism Mend had faced had been unfair and bizarre, citing the fact that Mend had held hustings at the time of the General elections and fringe meetings at Party conferences as “good practice”.

The highlight of the evening was undoubtedly the appearance of Jeremy Corbyn, who said he had spoken to a number of Muslim women about their experiences of Islamophobic hate crime and how it had affected them. He called for a unified approach, adding “an attack on one is an attack on us all”. He invited Mend to work with the Labour Party on their ‘Race and Faith’ manifesto launched earlier this year.

Naz Shah MP, Afzal Khan MP and Kate Green MP added their voices to the importance of Mend’s work.  Lord Brian Paddick, Liberal Democrat Peer spoke of his professional experiences of working as an Assistant Commissioner for the Metropolitan Police and commented that the phrase “Islamic terrorism” was a contradiction in terms.

We also had contributions from NUS President, Shakira Martin and NUS Women’s Officer Hareem Ghani about the impact of Islamophobia on students, with the latter adding that there was “a witch hunt against Muslim student activists and for that matter Muslim organisaations as a whole”.

Professor David Miller from Spinwatch said it was important to consider the political agenda, including the role of the State and foreign policy, when understanding the causes of Islamophobia.

Dr Shazad Amin, CEO of Mend talked about different types of Islamophobia, including Professional Islamophobia. He explained the ‘double-bind’ that Muslims are often faced with, with on one the hand being called isolationist and unwilling to integrate but, on the other, vilified and labelled as ‘extremists’ and ‘Islamists’ when they tried to become politically active.

Sufyan Ismail, Founder of Mend, commented on the Policy Pledges that Mend had created as the foundation of their work in tackling Islamophobia.

Stephen Kinnock officially closed the meeting and thanked all the speakers and attendees.

IAM occurs every November and is spearheaded by Mend in conjunction with a number of delivery partners, including the Police, Councils, schools, universities, mosques and others. The idea is to raise awareness of Islamophobic hate crime and discrimination and encourage reporting of incidents to the Police.

This year there are over 60 events planned nationally, including numerous displays of Mend’s Islamophobia Exhibition, which is designed to educate the public about Islam in general, and showcase positive contributions to society that British Muslims have made. Other events include:

Details of these events and others near you are available at mend.org.uk.[2]