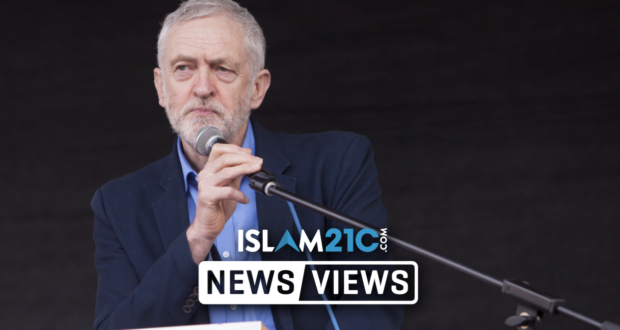 The leader of the UK’s largest opposition party has called on the Government to end arms sales to Saudi Arabia and has accused it of ignoring war crimes committed in Yemen by the Saudi-led coalition. The coalition includes several states such as the United Arab Emirates (UAE), Bahrain, Kuwait and Egypt.

During a rowdy session of the weekly prime minister’s question time, Jeremy Corbyn welcomed last week’s judgement of the court of appeal that declared British arms sales to Saudi Arabia unlawful and queried Prime Minister Theresa May on why the Government has failed to investigate whether its weapons were used in the bombing of innocent civilians.

“The UN describes the situation in Yemen as, and I quote, ‘humanities biggest preventable disaster’ and the government sees fit to continue selling arms to Saudi Arabia during that situation” Corbyn said, asking “does she believe there are serious ongoing violations of international humanitarian law by Saudi Arabia in Yemen?” [1]

In her response, May did not acknowledge her counterpart’s question. Rather, she said that there needs to be a political solution to the conflict in Yemen and that the Saudi-led intervention in the war-torn country was launched at the request of the UN-recognised government of Yemen and its legitimate president following its ousting by the Houthi rebel insurgency.

Corbyn accused May of not understanding the UN’s findings, as well as other governments’ decisions to ban arms sales to Saudi Arabia, and repeated UN warnings that if the war in Yemen were to continue, by the end of 2019, 230,000 people will have been killed, 140,000 of which are children under the age of five. He also said that under UK and EU law, the Government must stop arms licensing if there is clear a risk that its weapons are being used in the bombing of a civilian population.

“If the Saudi government says they are respecting human rights, do we then ignore all evidence on the ground in Yemen and continue to sell weapons to this regime which has led to this appalling death toll already in this conflict?” 1

May said that the Government will seek to appeal last week’s judgement and that the latter was not on whether the Government was making the right or wrong decisions but about the decision-making process and its rationality, reminding the House of Commons that the Saudi-led intervention was launched at the request of the internationally-backed government of Yemen.

The Labour leader also reminded the Commons that for three years, UN experts have been warning that the Saud-led intervention has been violating international and humanitarian laws in Yemen, which has resulted in the deaths of tens of thousands of people and injured and displaced many more. Corbyn also said, noting past government statements, that there can only be a political solution to the conflict in Yemen.

“If that is the case, why have they pumped £4.6bn of military equipment into this brutal bombardment already?” 1

Corbyn also brought to attention the statement of UN special rapporteur Agnes Callamard, who said last week that there is credible evidence that Saudi Arabia is responsible for the murder of journalist Jamal Khashoggi and asked the Prime Minister if the Government accepts the assessment.

May said that she would like to see accountability for Khashoggi’s murder and that she raised this issue with Saudi King Salman twice, as well as with the Crown Prince, Bin Salman at the G20 Summit last year. The Prime Minister said that the government expects Saudi Arabia to take necessary steps to ensure that such actions do not happen again and that it will follow due process in bringing to justice the perpetrators of Khashoggi’s death.

Corbyn went on to say:

“Mr Speaker there is overwhelming evidence that war crimes have been committed in Yemen by Saudi Arabian forces, a state that flouts every human rights norm at home and abroad, it’s government believes that it can kill with impunity journalists and civil rights campaigners, Yemenis or Bahrainis. But the UK has supplied them with over £4.5bn worth of deadly weapons.” 1

The Labour leader said that the Government should accept last week’s ruling, halt weapons sales to Saudi Arabia, and work on a serious negotiated peace settlement that will bring an end to the war in Yemen and save the lives of many more innocent people.

An estimated 8.4 million people are at risk of severe famine and more than 22 million people, 75% of Yemen’s population, are in need of humanitarian assistance. Impoverished Yemen has been wrecked by conflict since 2014, when the Houthi rebels overran much of the country, including capital Sanaa.

The conflict escalated in 2015 when Saudi Arabia and its Sunni Arab allies launched a wide-ranging military campaign aimed at rolling back Houthi gains and shoring up the country’s Saudi-backed government. The war has resulted in a collapsed economy and a cholera outbreak that has affected over 1.1 million people.

Riyadh has repeatedly accused the Houthis of acting as a proxy force for Iran, Saudi Arabia’s arch-foe in the region. Calls have been made to governments across the globe to halt weapon sales to Saudi Arabia, resulting in Germany suspending such sales.

The international criticism against the Gulf kingdom rose especially after the murder of journalist Jamal Khashoggi in October last year. A damning UN report said last week that the Saudi state was responsible for the Khashoggi murder and called for further investigation into the incident.

2019-06-28
Muhammad Mussa
Previous: The biggest threat to free speech at universities is Prevent
Next: Allāh is His Protector