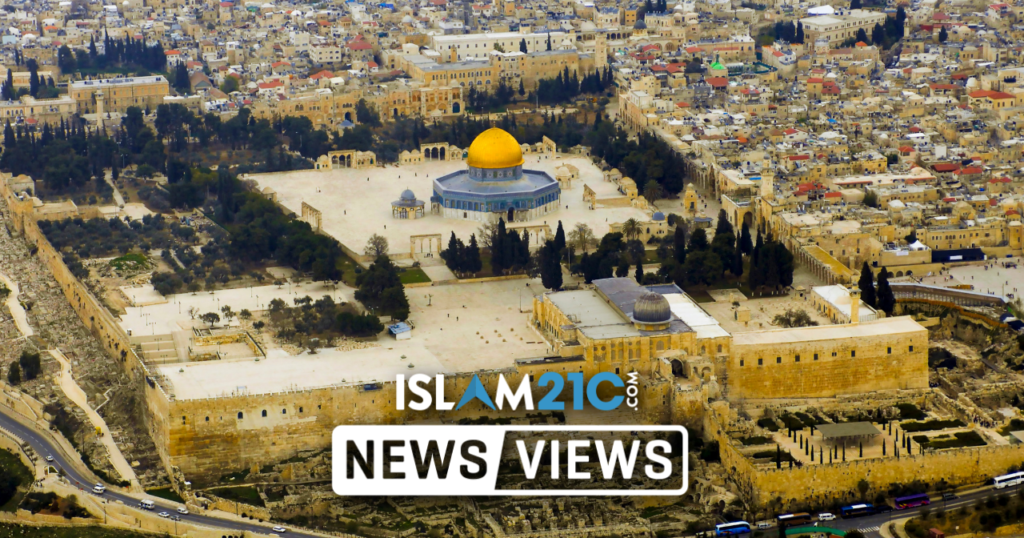 Amid reports that the UAE is gunning for control of the Al-Aqsa Mosque in Jerusalem, Jordan is scrambling to affirm its custodianship of the third holiest site in Islam. The move comes after a meeting between Israeli and Saudi leaders raised fears that the fate of the mosque remains uncertain and ‘up for grabs’ should a normalisation deal take place between the two countries.[1]

The news of the restoration of diplomatic ties between ‘Israel’ and the UAE was further antagonised following the release of a joint statement by ‘Israel’, the UAE, and America read:

“All Muslims who come in peace may visit and pray at the Al-Aqsa Mosque, and Jerusalem’s other holy sites should remain open for peaceful worshippers of all faiths.”[2]

Only last month, a delegation from the UAE visited the Al-Aqsa Mosque under the protection of Israeli forces, a move criticised by Palestinian PM Mohammad Shtayyeh who said:

Rumours of warming relations between Saudi Arabia and ‘Israel’ were bolstered by reports of a meeting between Israeli PM Benjamin Netanyahuand Saudi Crown Prince Mohammed bin Salman (MBS), alarming the Jordanian foreign ministry into releasing a statement challenging “attempts to alter the historical and legal status quo” of the mosque given Saudi’s inconsistent regional positioning on the matter.

Daifallah al-Fayez, a spokesman for the Jordanian foreign ministry, said:

“The blessed Al-Aqsa Mosque and Haram al-Sharif with its 144 dunams (35.5 acres) is a mosque exclusively for Muslims, and they alone have the right to pray there.

The kingdom [of Jordan] will continue its efforts to protect and care for the mosque and preserve the rights of all Muslims to it in compliance with the Hashemite custodianship of Jerusalem’s Muslim and Christian holy sites.”

Since 1924, Jordan has been the official custodian of Christian and Muslim holy sites in Jerusalem, after Sharif Hussein, the leader of the Arab revolt against the Ottoman Empire, was acclaimed as the custodian of Jerusalem’s holy sites.

Jordan remained the custodian of the holy sites in Jerusalem even after it relinquished its claim over the occupied West Bankin 1988. ‘Israel’ and Jordan later recognised Jordan’s role as a religious custodian after concluding the Wadi Araba peace treaty in 1994.

US President Donald Trump, accompanied by US Secretary of State Mike Pompeo, were reportedly in attendance for the meeting that took place between Netanyahu and MBS in northern Saudi Arabia earlier this week.[3] Jordanian leaders fear the Trump administration are said to be tempted to change the status quo and secure a regional legacy in the final week of its reign by offering the Muslim sites to Saudi Arabia as the centrepiece of a normalisation deal – an act that would dwarf any pacts signed in the last few weeks with the UAE and Bahrain.

Adnan Abu-Odeh, a former senior aide to both King Abdullah and his father King Hussein, said that guardianship of the Al-Aqsa compound had been the cornerstone of the Hashemite dynasty and a sense of pride for Jordan. Abu-Odeh said the fact that the arrangement was mentioned in the peace treaty signed between the two states illustrated that Jordan’s claim on retaining the status quo was strong.

“International law affirms that it is not permissible for occupying powers to change the status quo.”

“Israel, the occupying power in occupied East Jerusalem, must respect its obligations under international law and international humanitarian law, and respect the legal and historical status quo. Israel must also respect the sanctity of the mosque, the feelings of Muslims and Jordan’s role in caring for the holy sites.”

“As far as Israel and Netanyahu is concerned, Saudi Arabia is the big prize now.”

“I don’t think the Saudis will be in a hurry to give Mr Netanyahu, or even Mr Trump right now, more credit because they have to deal with four years of a potentially not very friendly American administration [if they did].”

“Many Jordanians … [are] being vigilant about this. Netanyahu … might find it to be worthwhile giving this to the Saudi royal family rather than keep it with the Hashemites because that would probably bring him the prize he’s seeking, which is open and declared normalisation with Saudi Arabia.”

“As for the Saudis, there would be some appeal there. Iran has always challenged them on the legitimacy of their custodianship of Mecca and Medina. If they were to add a third shrine to their list, it could enhance their claims to be the absolute leaders of the Islamic world.”