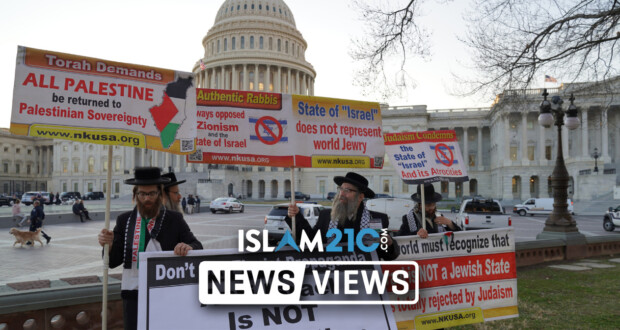 The lead drafter of the International Holocaust Remembrance Alliance (IHRA) definition of anti-Semitism has said that those seeking to blur the lines of criticising Zionism have transformed the wording of the matter into a weapon.

Kenneth Stern, the American author and defence lawyer who originally devised the “working definition of anti-Semitism” in 2005, has cautioned US president-elect Joe Biden not to implement the definition at a federal level. [1]

Speaking on the definition, Stern said it “was created in 2005 largely to give European data collectors guideposts of what to include and exclude in reports about anti-Semitism, so data could be compared across borders and time”. [3]

In an about-turn, Stern has advised the incoming presidential administration to focus on creating a White House task force that brings together experts to develop ideas and techniques to reduce all kinds of hate, including that directed against Jews.

In an intriguing blog post titled Zionism is not racism – BDS isn’t always anti-Semitism posted on the website of The Times of Israel’, the Director of the Bard Center for the Study of Hate made a number of points:

“I see the same politicization of complex terms today, in the opposite direction.

But it disturbs me that some Jewish leaders, including those who understood the dangers of the UN’s equation decades ago, are applauding Secretary of State Mike Pompeo’s recent declaration that anti-Zionism is, by definition, anti-Semitism.

And one can argue that since Jews are not going to give up their right to national self-expression without a fight, anti-Zionism is functionally anti-Semitic (and also anti-Palestinian, since its logical endpoint is perpetual conflict)

But that’s a far cry from saying that anti-Zionism is by definition anti-Semitism.” [2] [3]

Stern is concerned that politicians and organisations around the world are conflating the definitions of anti-Semitism with anti-Zionism, inevitably and undoubtedly stifling free speech.

One is not freely permitted to pass negative comments about the Zionist government that leads ‘Israel’, because in doing so, this is somehow spouting hate speech towards Jews.

Across the Atlantic, the UK Labour Party is in a dire situation in handling anti-Semitism. The party finds itself engulfed in public discussion about how it is rife with anti-Jewish sentiment, but when a senior Jewish member of the party says…

“I feel bloody uncomfortable seeing damned good comrades and friends of mine being suspended from this party for doing nothing more than trying to discuss the questions which led to Jeremy Corbyn’s unjust suspension – we know it was unjust because he was readmitted – and then the question of the whip being taken from him which is almost certainly unconstitutional in the party.” [4]

…and is suspended as a result, it becomes very clear that perceptions of anti-Zionism and anti-Semitism have been so excellently mixed up that knee-jerk reactions are being taken by one of the biggest political parties in the UK in order to avoid being seen as anti-Semitic.

To take Labour as an example, the party could very well take a stand and say that it needs a frank discussion about this issue in the public light, because to continue down this path is to further put a chokehold on free speech – and it should never be the case that criticism of a government equals criticism of an entire group.