Are you ready for our first ever NATIONAL CAMPAIGN?
Home / News / Khashoggi killing: Turkish court puts 20 Saudis on trial in absentia 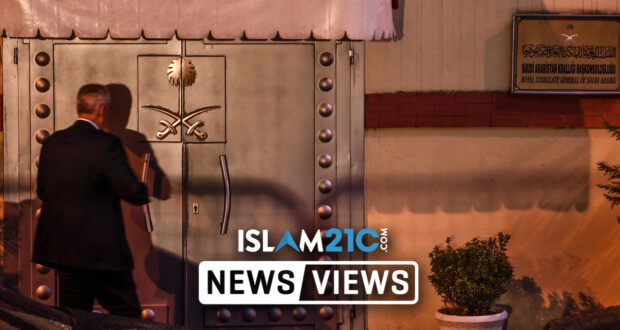 Twenty Saudi nationals have gone on trial in absentia in Turkey for the brutal killing of Saudi author and journalist, Jamal Khashoggi (raḥimahu Allāhu). [1]

Khashoggi was inhumanely murdered in Saudi Arabia’s consulate in Istanbul. On 2nd October 2018, Khashoggi walked into the Saudi consulate in order to acquire documentation he needed to get married. The 59-year-old was never to be seen again. [2]

The prominent critic of Crown Prince Mohammed bin Salman (MBS), is said to have been killed by a team of Saudi agents on the orders of MBS.

The defendants include two former aides to the prince, who denies involvement. [3] The top Saudi officials include former deputy head of Saudi Arabia’s general intelligence Ahmed al-Asiri and former royal court adviser Saud al-Qahtani, who are accused of “premeditated murder with monstrous intent”.

Giving evidence on Friday, Zeki Demir, one of the Saudi consulate workers has told the court he was asked to light an oven less than an hour after Khashoggi entered the building.

“There were five to six people there … They asked me to light up the tandoor [oven]. There was an air of panic,”

One theory police investigated was that the killers may have tried to dispose of Khashoggi’s body by burning it after suffocating him and cutting up his corpse into pieces, according to Turkish officials.

In his testimony, the consulate worker said that in addition to the oven in the consul’s garden he also saw many skewers of meat and a small barbecue.

The worker further added that the marble slabs around the oven seemed to have changed colour due to being cleaned with some sort of a chemical.

The murder of the journalist prompted worldwide outrage and increased scrutiny of Saudi’s Crown Prince who denies being involved in the killing. According to several reports by the UN and other independent organisations, Khashoggi was very likely killed on orders of the Crown Prince.

Although the Crown Prince continues to completely deny any involvement in the killing of the journalist, a UN expert has called for the royal to be investigated. In addition, in a report released last June, an expert described the killing as a “premeditated extrajudicial execution”.