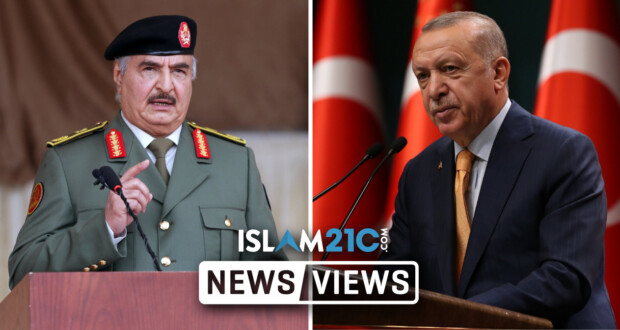 On the 69th anniversary of Libyan independence, the ex-CIA asset and head of the so-called ‘Libyan National Army’ (LNA), [1] Khalifa Haftar threatened to go to war with Turkey, claiming there will be no peace in Libya unless Turkey withdraws all of its troops and ceases support for the internationally-recognised Government of National Accord (GNA).[2]

In a statement where he referred to Turkey as “the colonizing enemy”, Haftar said:

“There will be no security or peace as long as the boots of the Turkish military are desecrating our immaculate soil… We will carry weapons to bring about peace with our own hands and our free will. The colonizing enemy has one of two choices: either to leave peacefully or to be driven out by force…”[3]

The Turkish Foreign Minister, Mevlüt Çavuşoğlu, gave his best wishes to the Libyan people on their Independence Day by saying:

“Libya, I wholeheartedly congratulate the brotherly Libyan people on their national day. We will always support our Libyan brothers to ensure unity, solidarity, and stability…”[4]

The North African country has been in a state of anarchy since the NATO-backed overthrow of the long-time authoritarian ruler Muammar Gaddafi in 2011. [5] Haftar, a military man who was once a close ally of the deceased dictator Gaddafi, participated in Gaddafi’s 1969 coup that overthrew the then-King Idris I.

Haftar was later assigned chief officer in command during the latter days of the Chadian–Libyan conflict from 1978–1987. Haftar failed catastrophically in his role, as hundreds of his men were captured as prisoners of war by the French-backed Chadian forces, with Gaddafi thereafter essentially disowning him.

The brutal commander, Haftar, in his pursuit to rule all of Libya, has led military assaults across several cities within the country and has on several occasions ruled out a ceasefire. He has been supported and financed by the United Arab Emirates (UAE), Egypt, Russia and Saudi Arabia.

Haftar appears to be responsible for much of the chaos in the country and as a general has purportedly instructed his soldiers to commit war crimes and atrocities. [6] Forces loyal to Haftar have long been accused of carrying out several mass cold-blooded killings and massacres of innocent civilians. [7]

Turkey has been supporting the Tripoli-based GNA after accepting an offer from Turkey for both logistical and military support. The two countries have recently approved extending the presence of its personnel for another 18 months. Haftar has regularly been undermining the country’s recovery peace process by violating truces repeatedly.[8]

🇱🇾🇹🇷 #Breaking:#Haftar says war against #Turkey in #Libya is imminent, urges his militias to be ready when the time comes.
———-
** He didn’t learn the lessons! His operator(s) should be stopped by a credible threat. pic.twitter.com/6SwonHlbro

With the Libyan Army spokesman suggesting the appropriate place for Haftar is prison, the complicated national integrity of Libya continues to be further exacerbated, as France, the UAE, and Russia are reportedly making use of a Syrian commercial airline to deliver mercenaries into Libya.[9]

In response to warlord Haftar’s new war threats, spokesperson of Libyan Army Mohamed Gununu says there will be no peace with the criminals and aggressors, adding that the prison is the right place for Haftar pic.twitter.com/pthDUfNoN1

2020-12-28
Shaheer Choudhury
Previous: Bangladesh continues forced transfer of Rohingya to remote island
Next: Peace is Nothing Without Freedom