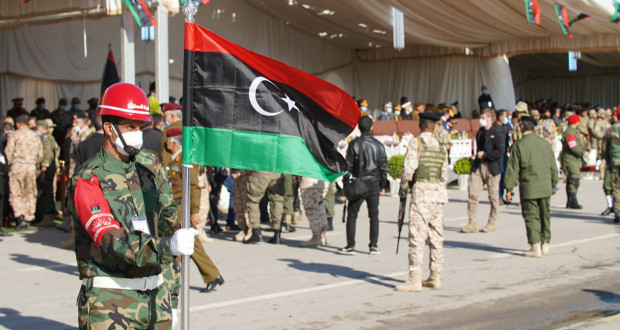 Saif al-Islam Ghaddafi, the son of former Libyan dictator Muammar Ghaddafi, has registered himself as a presidential candidate in what would be Libya’s first official presidential election next month.

In a video posted on Twitter on Sunday, Ghaddafi was seen in the southern city of Sabha, sitting at a table with an official presidential election poster in the background. During the session a group of supporters could be observed surrounding him. He can also be seen signing and finger printing candidacy documents that would make his running for the office official [1].

The High National Electoral Commission released the following statement regarding the matter:

“Saif al-Islam al-Gaddafi submitted…his candidacy for the presidential election to the High National Electoral Commission office in the [southern] city of Sebha.” [2]

“…the Sebha Electoral Management Office witnessed the acceptance of the papers of the candidate Seif. Islam Gaddafi, to be the second candidate for this position.” [2]

Saif al-Islam was seen as the natural successor and heir apparent to his father, Muammar Ghaddafi. The latter ruled the North African country with an iron fist, and in his policies implemented a blend of socialist and Pan-African ideologies catalogued in his infamous The Green Book.

With a degree from the London School of Economics and an educated understanding of international politics, Saif al-Islam was seen as being more pragmatic, idealistic, and understanding compared to his father. It was anticipated that he would be able to bridge the gap between his country and the West.

His reputation, however, fell afoul of his international friends following his support and backing of the brutal oppression of protests. The 2011 Libyan uprising eventually morphed into a fully-fledged armed revolution, which saw the gruesome end to his father’s regime.

Following the fall of Ghaddafi’s regime, Saif al-Islam was arrested by militia fighters in 2011 and held captive for six years. He was initially sentenced to death in 2015 by a Tripoli court for war crimes due to his role in the deaths of protestors. However, he was pardoned in 2017 and released from prison. He is still wanted by the International Criminal Court (ICC).

Saif al-Islam remains a divisive figure in Libyan society and politics, despite a decade passing since the end of his father’s regime. The memories of Ghaddafi’s rule and its downfall are still fresh in the minds of Libya’s people, as the country continues to reel from a decade of internal strife and conflict.

Since his arrest and release, he has been an elusive figure, and has remained hidden and out of public sight.

Despite his ominous past, Libya’s new governing system has allowed Saif al-Islam to register and run as a presidential candidate. They argue that there are no inconsistencies in his decision to run, and that he has met the requirements for a candidate.

Analysts, however, believe it to be difficult for Saif al-Islam to have a good chance at winning the election. Calling his candidacy a message to wider Libyan society, analysts believe this is Saif al-Islam’s way of saying that he is a part of the political system. Not only has he indicated his ability to register as a presidential candidate, he has also shown that an ICC warrant will not deter him.

In an interview with Al Jazeera, Ibrahim Fraihat of the Doha Institute said:

“I don’t think he has any chance of winning this election, I don’t think he himself thinks that he has a chance. For him, this is a political message that he’s trying to send; that he’s back at the political scene and part of the game and also that he can run in the election and he’s ignoring the International Criminal Court’s request for him to be handed over.” [3]

Libya’s first official presidential election will be held on December 24 next month. It is a part of the UN-backed peace process, which aims to bring an end to the decade old conflict that has seen the country split into two. Currently, the former internationally recognised Government of National Accord in Tripoli assumes power over Western Libya, while the sphere of control of the renegade general Khalifa Haftar consists of the eastern part of the country, including Benghazi.