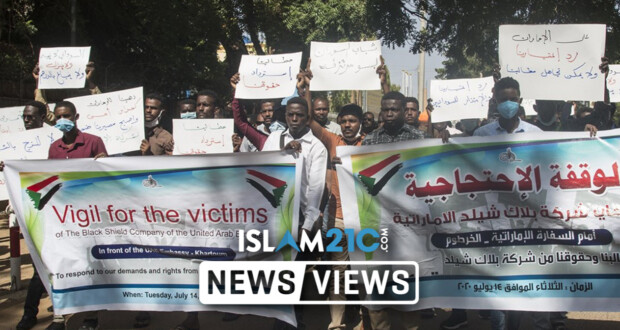 Hundreds of Sudanese protestors gathered outside the United Arab Emirates (UAE) embassy in Khartoum on Tuesday to march against a suspicious recruitment drive by the UAE to fight for renegade Libyan commander Khalifa Haftar’s forces.

The demonstrators demanded an “apology and compensation” from the UAE authorities for being deceived by Emirati company Black Shield Security Services (BSSS) after they were promised ordinary security jobs but were then forced to serve as Haftar’s militia instead.

Abu Alma Ali Hamza Taha, a protestor at the march, said, “We demand an apology from the UAE to the Sudanese people because we are not mercenaries.” Ahmad Babakr, another demonstrator, threatened to take the issue to the United Nations “if the UAE embassy failed to respond to our demands.”

The issue of Sudanese men deceived by the UAE’s BSSS and taken to Libya has been widely reported, with the UN reporting last year that thousands of Sudanese militiamen were stationed in the eastern Libyan city of Benghazi. BSSS have denied all allegations of lying to the Sudanese nationals about the nature of their expected work in Libya.

Along with Egypt and Russia, the UAE is a main backer of Haftar and has been accused by the UN and many rights organisations of breaking a UN arms embargo on Libya by sending weapons and mercenaries to fight for Haftar’s Libyan National Army (LNA).

A UN report released last October explained that thousands of Sudanese men were fighting alongside the LNA against forces from the Tripoli-based Government of National Accord (GNA). However, Haftar’s forces have been on the back foot after military support from Turkey helped GNA fighters repel Haftar’s 14-month assault to seize Tripoli. The GNA have also recaptured the key Al-Watiya airbase and the city of Tarhuna, and are now focusing their attention on the city of Sirte.

Haftar has deployed thousand of foreign mercenaries, including many Sudanese and Chadian fighters, in anticipation of the battle for Sirte, which is the last significant settlement before the traditional boundary between Libya’s west and east. The GNA have also set sights on the city, as whoever controls Sirte controls Libya’s main oil export ports.

The UAE on Tuesday issued an implicit warning to GNA forces advancing on Sirte. The UAE Minister of State for Foreign Affair, Anwar Gargash, tweeted, “The drums of the war raging around Sirte in Libya threaten serious developments and dangerous humanitarian and political consequences.” Gargash further added, “We in the UAE call for an immediate ceasefire and for wisdom to prevail.” Years of ongoing international efforts have failed to bring lasting peace to the North African country, which has the continent’s largest proven oil reserves.

Egyptian President Abdel Fattah el-Sisi called Sirte a ‘red line’ for Egypt, while Turkey has urged Haftar to withdraw from the strategic city and to immediately negotiate a ceasefire.

Libyan analyst Jalel Harchaoui of the Clingendael Institute said that despite the rhetoric, he did not see the imminent risk of a major military escalation. Harchaoui added, “Cairo’s political desire for a visible and official Egyptian intervention remains very tenuous.” According to Harchaoui, “Egypt has other problems at the moment” at a time of regional, economic, and coronavirus pandemic worries.