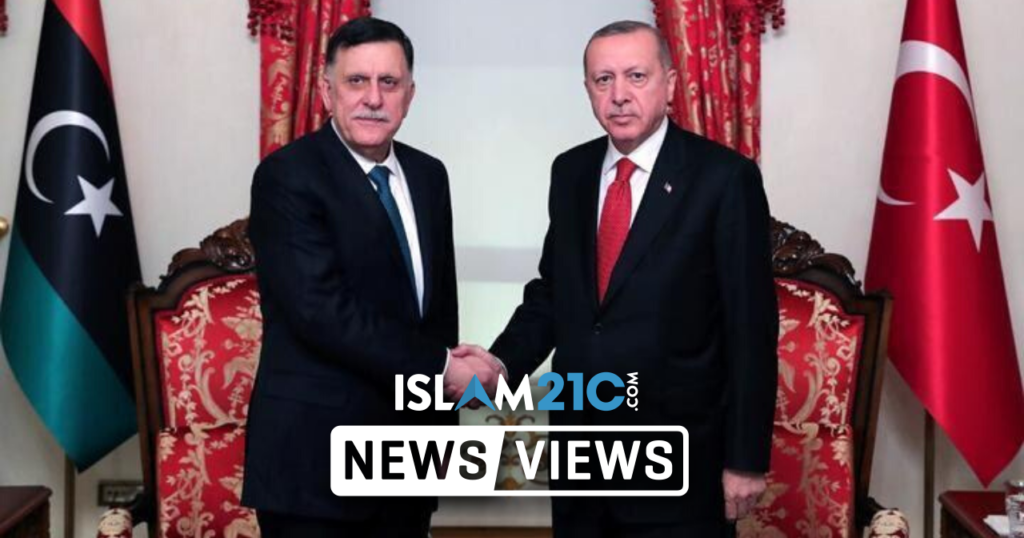 The Government of National Accord (GNA) in Libya has accepted an offer from Turkey for logistical and military support as it resists and seeks to deter an offensive led by forces loyal to the ex-CIA asset and head of the ‘Libyan National Army’ (LNA), Khalifa Haftar. [1]

The brutal military commander, Haftar, in his pursuit to rule all of Libya, has led military assaults across several cities within the country and has on several occasions ruled out a ceasefire.

The GNA is the internationally recognised government of Libya and has the backing of the United Nations (UN), as a result of the Libyan Political Agreement signed in 2015. [2]

During a statement on Thursday, the GNA said that its cabinet had “unanimously approved the implementation of the memorandum of understanding on security and military cooperation between the GNA and the Turkish government signed on November 27”. [3]

Prime Minister Fayez al-Serraj, who leads the GNA, met in the presence of several military officilas. However, it gave no further details as to the exact terms of the agreement or the assistance that the GNA will receive from Ankara.

The Turkish Parliament approved the deal with the GNA, an agreement that could potentially clear the way for military support. According to a report by United Nations’ experts, Turkey has already sent military supplies to Libya. [5]

In the past, Turkish officials have stated that Ankara is willing to send troops to Libya at the request of the GNA, however the Foreign Minister, Mevlut Cavusoglu on Saturday stated that no such request had yet been made.

The Turkish President Recep Tayyip Erdogan, on Wednesday said that the Turkish government was ready to assist the GNA. He said:

“We will speed up the process between Turkey and Libya. We told them that we are always ready to help if they need it. From military and security cooperation, to steps taken regarding our maritime rights – we are ready,”

In his quest for power over Libya the general once described his actions in the eastern city of Derna as being a means to “choke” the city irrespective of the damage and civilian cost. [6]  Haftar was once a close ally of the deceased dictator Muammar Gaddafi. [7]

In 1969, he worked together and fought alongside Gaddafi to overthrow the then King Idris. He returned to Libya from the US seven years ago in order to participate in the NATO-backed revolution against Gaddafi. It is for this reason that many have referred to him as a traitor who changes alliances in his mission to gain power. [8]

Haftar appears to be responsible for much of the chaos in the North African country and as a general has purportedly instructed his soldiers to commit war crimes and atrocities. [9] Forces loyal to Haftar have long been accused of carrying out several mass cold-blooded killings and massacres of innocent civilians. [10]

Human Rights Watch (HRW) stated in a report that:

In another report HRW states that the:

“Libyan National Army (LNA) forces may have committed war crimes, including killing and beating civilians, and summarily executing and desecrating bodies of opposition fighters in the eastern city of Benghazi…” [12]

According to the GNA, around 600-800 Russian mercenaries are involved in fighting in Libya and supporting the brutal general Haftar. Dozens of foreign-backed militia groups, guised as ‘Salafiyah’, have also provided unconditional allegiance and military support for Haftar against Libya’s internationally recognised leadership. [13]

This is despite many of these groups’ disavowal of Libya’s revolution against Muammar Gaddafi, accusations of it ‘going against the ruler’, and rhetoric to the effect of unconditional allegiance ‘to the ruler’. These dubious groups are responsible for the murder of dozens of Libya’s scholars and activists in Benghazi under the command of Mahmud al-Werfali, an individual that it indicated in the International Criminal Court for harrowing war crimes.

According to the Grand Mufti of Libya, Sheikh Sadiq al-Ghariani:

“The Madkhaliyyah (the characteristic name of the self-dubbed Salafi groups supporting Haftar) claim to be the champions of tawḥīd and acting according to the Sunnah despite fighting under the banner of Haftar. They are, in fact, mercenaries working for Saudi Arabian intelligence agencies and they are responsible for killing Sheikh Nader al-Omrani, may Allāh have mercy on him…They have killed tens, if not hundreds, of scholars, callers to Islām, and teachers of the Qur’ān in Benghazi”. [14]

Sheikh Nader al-Omrani was a prominent Islamic cleric and head of the Organisation for Libyan Islamic Scholars, as well as a member of Dar al-Iftaa, the country’s highest Sunni religious authority.

In his pursuit to gain power of Libya many fear that Haftar aims to reinstate oppressive authoritarian rule and bring about more violence and destruction just like his once close comrade Gaddafi.

Joining General Haftar in his quest for dominion over Libya are the United Arab Emirates (UAE), Egypt, and Saudi Arabia. The three states support Haftar and his forces and are reported to have financed his ‘LNA’ with both money and military supplies. The states have also been responsible for carrying out several airstrikes in Libya. [15]

The UAE has also been contracting its airstrikes in Libya to the private security company ‘Blackwater’, which was proven to be responsible for a number of massacres in Iraq, including one that killed and injured around 40 civilians. [16] [17]

Libya has been in a state of anarchy since the NATO-backed overthrow of the long-time authoritarian ruler Muammar Ghaddafi in 2011.[18] With no pressure on Haftar from neither his Egyptian and Emirati backers that work with him militarily nor the international community, the prospect of him halting his military campaign in favour of dialogue and reconciliation looks increasingly dim. May Allāh (subḥānahu wa taʿālā) protect the civilians and bring the wrongdoers to a swift account. Āmīn.

Read More:  The Return of Gaddafi

Hamad Momin
Share. Facebook Twitter LinkedIn Email Telegram WhatsApp
Previous ArticleWhat YOU can do for the Muslims of India
Next Article India is at a Crossroads