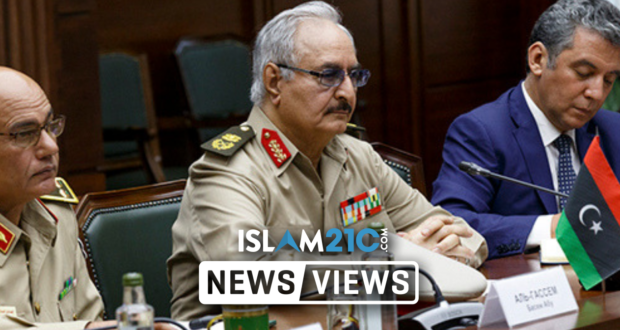 General Khalifa Haftar’s assault on the Libyan capital has left over 120 people dead and has defeated any chance for a peace settlement between the warring factions.

The UN-backed Government of National Accord (GNA), Libya’s internationally recognised government based in the Libyan capital, Tripoli, has shot down a fighter jet on Sunday belonging to the self-styled Libyan National Army (LNA) of the rogue general, Khalifa Haftar.

Security sources within the GNA have said, according to Al Jazeera, that the fighter jet was operated by the LNA and was shot down in Tripoli’s southern outskirts.[1] Furthermore, the LNA have also confirmed that one of their jets was shot down, but that the pilot had safely ejected before the plane crashed.

The LNA have increased air raids on the capital as part of Haftar’s offensive to capture the city from the internationally recognised government and GNA forces. Haftar launched his offensive on April 4th to take the capital, arguing that his aim was to stabilise western Libya and rid it of the many brigades that control it. According to Al Jazeera:

Since the start of the LNA’s offensive, more than 120 people have been killed and 561 have been wounded. As of April 13th, 15,700 people have been forced from their homes, according to the UN Office for the coordination of Humanitarian Affairs.[2]  The World Health Organisation in Libya tweeted:

The shooting down of the LNA jet came the same day as Haftar met with Egyptian president, Abdel Fattah el-Sisi in Cairo. The UN was scheduled to hold a meeting today and tomorrow that was tied at brokering an agreement between Libyan prime minister, Fayez al-Sarraj, and Haftar in the southern town of Ghadames. However, the LNA assault on Tripoli has forced the UN to cancel the meeting.

Following the meeting with Sisi, a statement from the president’s office “confirmed Egypt’s support for efforts to combat terrorism and extremist groups and militias in order to achieve security and stability for the Libyan citizen.”[1]

Haftar is also supported by Saudi Arabia and the United Arab Emirates, who finance and equip his LNA. Prior to the LNA’s offensive, Haftar had met with King Salman of Saudi Arabia and it is believed that Haftar took that meeting as a green light to launch his offensive. Khalil Jahshan, executive director of the Arab Centre in Washington DC said:

“Immediately after his [Haftar’s] return, he kind of escalated his role, his confrontation with his competitors in Libya so clearly he got the political endorsement first and I’m sure he got the financial and military support afterwards even though this is not necessarily the only party in the Gulf or in the Middle East that has been supportive of Haftar over the past few years.”[3]

The UAE have also played a role in destabilising the GNA’s authority and enhancing Haftar’s outreach in areas that have not, until recently, been under his control. In December 2018, Al Jazeera Net revealed that the UAE had reportedly offered GNA generals, in southern Libya, rewards if they defected to Haftar’s LNA, thus weakening the GNA’s authority in southern Libya and allowing Haftar to open up bases that would support his assault on Tripoli and elsewhere.[4]

Furthermore, tribal delegations from the south, who are loyal to Haftar, visited the UAE in March and held talks with officials, regarding financial and military support to tribal and pro-Haftar forces in the south.[4]

According to a report in the Wall Street Journal, Riyadh offered Haftar tens of millions of dollars, which he accepted, to finance the Tripoli offensive, as well as to buy the loyalty of tribal militias and help recruit troops for Haftar.[5]

The UN has condemned the LNA’s assault on the city, arguing that the offensive threatens to kill any chance of a peace settlement between the two factions, and will restart a civil war in the country. UN Secretary General, Antonio Guterres, tweeted:

I am deeply concerned by the military movement taking place in Libya and the risk of confrontation. There is no military solution. Only intra-Libyan dialogue can solve Libyan problems. I call for calm and restraint as I prepare to meet the Libyan leaders in the country.

Libya has been in a state of anarchy since the NATO-backed overthrow of the long-time authoritarian ruler, Muammar Ghaddafi, in 2011. The oil-rich country has since been ruled by a patchwork of rebel brigades and two competing administrations in Tripoli and Tobruk.