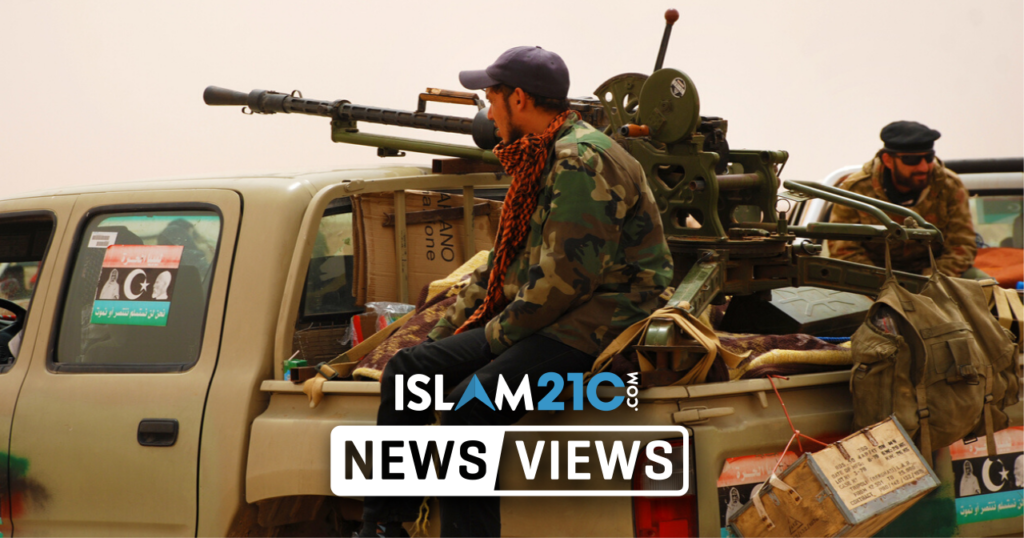 The UN-backed Government of National Accord (GNA) has made steady progress in its campaign against the militias of Benghazi-based warlord Khalifa Haftar, destroying vital supply routes and infrastructure and gaining the support of local communities.

On Saturday, the GNA air force conducted airstrikes against the Watiya airbase east of the capital Tripoli and in the region of Nesme, 200 kilometres south of Tripoli. According to a military spokesman, two militia fighters were killed and five injured.[1] GNA forces also destroyed a number of armouries belonging to Haftar’s militia as well as an oil tanker.

A second airstrike also destroyed another oil tanker making its way to the city of Tarhuna, a major supply base for Haftar’s militia and a launch pad for their attacks against Tripoli and other government-controlled cities and towns. The Libyan air force also targeted a group of Sudanese mercenaries who were earlier an attack against government areas.

The GNA, which recently accepted an offer from Turkey for logistical and military support, has been successfully resisting attacks and advancements as it seeks to deter inhumane offensives led by forces loyal to the ex-CIA asset and head of the ‘Libyan National Army’ (LNA), Haftar.[2]

The brutal military commander, Haftar, in his pursuit to rule all of Libya, has led military assaults across several cities within the country and has on several occasions ruled out a ceasefire.

The GNA is the internationally recognised government of Libya and has the backing of the United Nations (UN) as a result of the Libyan Political Agreement signed in 2015.[3]

Five Janjaweed mercenaries from Sudan were also killed in the attack, and three armoured vehicles were destroyed according to an announcement from the military on Sunday. The Sudanese mercenaries were hired by Haftar and form a part of his militias in their attacks against the government.

“Our brave forces have seized control of the cities of Sabratha and Surman, and are chasing the holdovers of the terrorist militias. Our heroic forces have captured a number of Emirati armoured vehicles, Grad missile vehicles, and 10 tanks.” military spokesman Mohamed Qnounou said in a statement.[4]

Qnounou’s statement is backed by footage released from a GNA-affiliated twitter account that shows the capturing of Emirati armoured vehicles. It has a caption that reads “Footage shows our valiant forces seizing control of two UAE-supplied armoured vehicles during our forces’ advance in Surman on Monday.”[5]

As well as recapturing strategic areas from Haftar’s militia, the GNA is also winning the support of local communities and various military councils that were under the occupation of Haftar’s militias.

On Saturday, the military council of the city of Murzuq and the Association of the People of the City announced their support for the GNA in which they rejected the military coup launched by Haftar and his militias and stressed they would not be forced to return to totalitarian rule.

Furthermore, in a joint statement released on Thursday, the people of Sabha in southwest Libya declared that they will no longer be supporting Haftar and have now announced their allegiance to the GNA whom they view as being the legitimate government of Libya.

Haftar is responsible for much of the chaos in the North African country, and as a general he has purportedly instructed his soldiers to commit war crimes and atrocities.[7] Forces loyal to Haftar have long been accused of carrying out several mass cold-blooded killings and massacres of innocent civilians.[8]

Human Rights Watch (HRW) stated in a report that:

In his pursuit to gain power of Libya, many fear that Haftar aims to reinstate oppressive authoritarian rule and bring about more violence and destruction, just like his once close comrade Gaddafi.

Haftar and his militia have been attacking the Libyan government, its cities and towns for almost year. However, they have so far failed in achieving their objective: capturing of the capital Tripoli and overthrowing the UN-backed and legitimate administration, the GNA.

Joining General Haftar in his quest for dominion over Libya are the United Arab Emirates (UAE), Egypt, Saudi Arabia, Russia, and France. These states support Haftar and his forces and are reported to have financed his ‘LNA’ with both money and military supplies. The states have also been responsible for carrying out several airstrikes in Libya.[10]