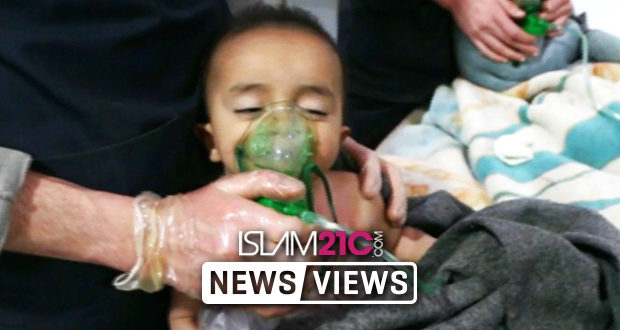 Yesterday brought a glimmer of hope that a ceasefire would allow some relief to the besieged people of Ghouta. However, as was sadly predicted, Russian and Syrian Regime forces continued their bombing of 400,000 starving civilians hiding in their basements.

There have even been unconfirmed reports of a chemical attack in Ghouta,[1] and of an attempted ground offensive.[2] For their part, rebel forces have agreed to the ceasefire, but held their right to self-defence if attacked. [3]

White Helmets even put out a statement that due to the intensity of the bombing the scores of dead women and children were to be buried in mass graves.[4] Many people, including non-Muslims are turning their attention to Russia. Such people are expressing outrage at Vladamir Putin and asking why he is so committed to the criminal Bashar al-Assad.

The answer is not simple, yet part of the reply is that the carnage of Syria allows Russia a theatre in which to test and market its sophisticated weaponry.

“As we helped the brotherly Syrian people, we tested over 200 new types of weapons.”[5]

Shamanov confirmed that the Syrian regime had purchased stockpiles of these Russian weapons, almost certainly for use in Ghouta and other densely civilian populated areas. The Russian MP boasted that:

“It’s not an accident that today they are coming to us from many directions to purchase our weapons, including countries that are not our allies.”

Sharmanov even grotesquely praised the Russian army which is responsible for the killing of scores of women and children:

“Today our military-industrial complex made our army look in a way we can be proud of.”[6]

This latest upsurge in violence presents a direct challenge to the authority of the UN by Russia, who is a permanent member of the security council. Russia is said to be brazenly ignoring the directions of the UN and thereby undermining its credibility.

The US, UK and other countries had accused Russia of obstructing the resolution which they now appear to be in breach of. Unless there are tangible consequences for any party which breaches the ceasefire, just what role the UN has in the world is up for debate.

2018-02-26
+Editor
Previous: How Can We Save Ghouta?
Next: Paul Moore appears in court for largely unreported anti-Muslim attack on Zaynab Hussein