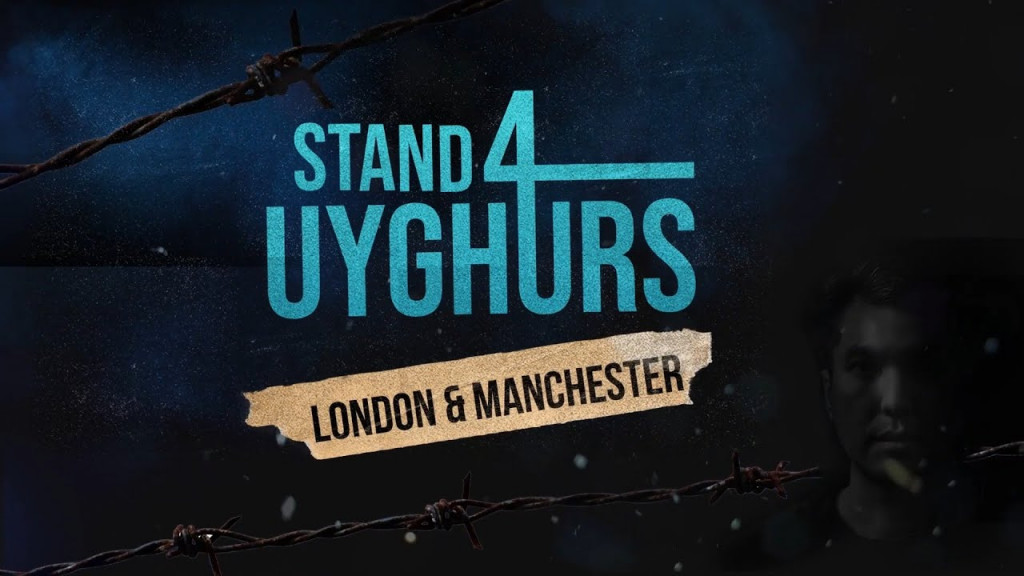 Billed as the most impactful Uyghur protest ever to take place, next Saturday (corresponding to 13 November 2021) will see attendees stand for Uyghurs in the British capital of London, as well as northern powerhouse Manchester. Over fifty national organisations have united under the leadership of Islam21c and are primed to demand that the Chinese authorities end the indefinite internment of Uyghurs, Kazakhs, and other Muslim communities in East Turkestan (or Xinjiang, which is the word of preference for the Chinese media and government). [1]

A number of countries, such as the United States, United Kingdom, Canada, and the Netherlands have already witnessed their respective legislatures or executive branches of government declare the existence of an ongoing genocide in East Turkestan. [2] [3] [4] However, despite overwhelming evidence of forced sterilisations, abortions, rape and sexual abuse, torture in concentration camps, the use of tiger chairs in interrogation sessions, a ban on Muslim baby names, the destruction of mosques, cultural erosion, and forced labour, a large group of nations still support China in its so-called anti-extremism drive. [5] [6] [7] [8] [9] [10] [11]

The international community has failed to implement any decisive measures to halt China’s oppressive actions against its minority Muslim population. Although the ruling Chinese Communist Party (CCP) has been strongly criticised by the West for its actions in Xinjiang, countries such as Saudi Arabia, Russia, Pakistan, Belarus, members of the Gulf Cooperation Council, and other states continue to back the CCP. Pakistan’s Prime Minister Imran Khan stated in a televised interview in July:

Such nations – many of which have deep economic ties with China – argue that the country’s steps in the East Turkestan region are necessary in order to combat terrorism. Pakistan is a prime example in this regard. From 2013 to date, it has gained numerous economic benefits from the China-Pakistan Economic Corridor (CPEC) infrastructure project. Through such initiatives, it has realised rapid upgrades to its inadequate rail networks, as well as power plants and motorways. Furthermore, with China’s aid it has been able to provide cash injections towards the long delayed Iran-Pakistan-India gas pipeline, which is expected to provide natural gas from Iran to Pakistan upon completion. [13] [14]

Qelbinur Sidik, an Uzbek teacher hailing from Urumqi, while providing evidence at the Uyghur Tribunal in June 2021, painted a truly horrifying picture of the ordeal that Uyghur women face in Chinese concentration camps. Among the nine testimonies given on the first day of the Tribunal, Sidik provided the opening statement for the proceedings. Sidik, who formally worked for 28 years at the local 24th Primary School, described a conversation with a prisoner. The topic of discussion was rape, which was said to be rampant in the detention centre. The imprisoned woman opened up to Sidik:

“What’s not to believe these rumors? There is a reason male police officers would beg to come to this camp since there’re more pretty girls here. They take girls into the investigation rooms where there’s no camera, and 4-5 police officers rape one girl one after another. After raping, they take electric rods and stick it into their vagina and rectum to torture, and rape again after.” [15]

It is fortunate that the number of states that approve of China’s oppressive approach towards the Uyghurs and other Turkic Muslims in East Turkestan is declining. Nevertheless, further efforts are required. This is why the upcoming protest on Saturday (13 November) is so critical.

It is worth mentioning that during the 1 July Stand4Uyghurs demonstrations in London, record numbers were in attendance. Indeed, the Chief Editor of Islam21c Dr Salman Butt heralded the event, having heard it described as “the biggest demonstration for Uyghurs ever held by non-Uyghurs…in the world”. [16] Moreover, there are indicators which suggest that the Chinese government was shaken by the July 2021 protest. Uyghurs later said that mosques were being opened for Eid prayers for the first time in five years. This is a clear testament that the voice of the Uyghur people is being heard.

Once again, everyone – including family members, friends, and colleagues – is welcome to attend the pivotal event on Saturday, 13 November, which will be organised in the cities of London and Manchester. Coach tickets are available if necessary. Seats for Birmingham-London, Cardiff-London, Luton-London, Slough-London, High Wycombe-London, and Sheffield-Manchester can be booked at the link here.

In order to ride the wave of momentum and persistently apply pressure on the genocidal government of the People’s Republic of China, join us in London and in Manchester. Let us push for the immediate end to the Uyghur genocide, once and for all. 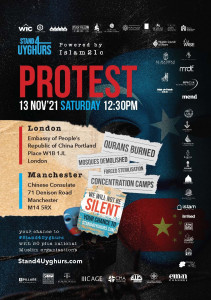