Macron: ‘Islam is a religion that is in crisis all over the world today’ 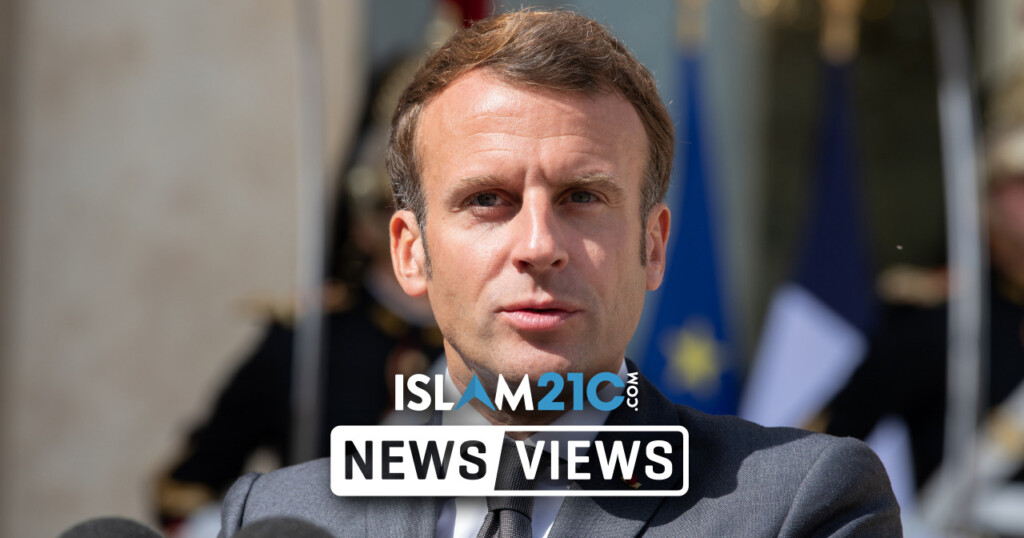 French President Emmanuel Macron announced a new law today created to combat “radical Islamism” in order to apparently “defend the republic and its values and ensure it respects its promises of equality and emancipation”.[1]

Macron no longer hiding his feelings about Islam. No longer radical Islam, now it’s just Islam that is the problem https://t.co/ljRK3LuNMM

The long-awaited address began with Macron claiming Islam was “in crisis” all over the world.

“Islam is a religion that is in crisis all over the world today, we are not just seeing this in our country”[2]

“President Macron described Islam as ‘a religion that is in crisis all over the world today’. I don’t even know what to say. This remark is so dumb (sorry it is) that it does not need any further analysis … I won’t hide that I am concerned. No mention of white supremacy even though we are the country that exported the racist and white supremacist theory of the ‘great replacement’, used by the terrorist who committed the horrific massacre in #Christchurch.”

“Emmanuel Macron, like others who profit from propping up the failed ideology that has caused so much turmoil in the world today, is understandably taking cheap shots at Islam. It is the only comprehensive way of life with a historical track record of creating civilisation from chaos similar to today’s, and it is genuinely a threat to his ill-gotten, temporal privileges. If he were wise he would learn from history and humble himself, lest he join the long list of forgotten losers as footnotes that got in the way of justice, truth and mercy for humanity.”

Shaykh Dr Haitham al-Haddad had a message for President Macron:

Before claiming that Islam is in crisis, he should look at his own values first. Before throwing stones he should look after his glass house. We don’t want to recall the millions of people his ideology in France exterminated in many countries. Maybe he can educate himself with “Calendrier des crimes de la France outre-mer” by author  Jacques Morel.

France is still very much in the throes of its white supremacist ideology mascerading as “secularism”.  Let us ask Macron how France still look at the black people. How does France view Africa? Ask him about the African countries that must deposit their national currency reserves in France at the central bank. Ask the enlightened civilized macron why a dozen African countries still pay billions of Euros as “Colonial Tax” to France each year.[3] What are these democratic values that he claims to want to protect while France is among the first countries to support dictators all over the world? Who supported Gaddafi of Libya, who is supporting the current Haftar of Libya, who is supporting Hezbollah of Lebanon and meeting secretly with them and others?

Before claiming to fix Islam, fix your civilization and protect your people. Are you aware that your county has the second-highest rates for suicides in Western Europe?[4] France had an overall suicide rate of 12.1 per 100,000 people in 2016. It is also a fact that Europe in general leads the world in suicides.

Despite all the attacks against Islam, it is still the fastest growing way of life in the world. Humanity is fed up with the failed and hypocritical ideology propping up your “civilization”, “technology” and “enlightenment” and want to embrace a way of life that provides them with authentic, non-hypocritical values. They want to adopt a way of life that is not racist and does not take advantage of people and require structural and ongoing oppression just to stay afloat. That way of life is called Islam.

Do not worry Mr Macron, your people are not all like you, they are indeed turning to Islam. The rate of conversion to Islam in France is on the rise. Sooner rather than later, your children or perhaps even you might become Muslim because Islam wins even its enemies. It is better to work with Muslims to fix the problems of your so-called “civilization” before it is destroyed by your values.

Editor of British Muslim news site 5Pillars, Roshan Salih, and spokesperson for the MCB, Miqdaad Versi, also tweeted their response, with many calling the President’s words a blatant attempt to divert attention away from France’s coronavirus second wave crisis.[5]

Just listened to speech by #EmmanuelMacron which could have come out of lips of Boris Johnson or any right wing leader. Political Islam is bad, Islamic separatists are trying to undermine secular values. And then he mentionned French colonialism as if it was thing of the past!

The willingness to use Islam & minority Muslim communities to rally supporters by promoting a divisive culture war against minorities, in the midst of the coronavirus pandemic, shows more about those who promote such divisiveness than anyone else… https://t.co/qJxShTIleJ

The repression of Muslims has been a threat, now it is a promise. In a one hour speech #Macron burried #laïcité, emboldened the far right, anti-Muslim leftists and threatened the lives of Muslim students by calling for drastic limits on home schooling despite a global pandemic.

The new measures are aimed towards “liberating French Islam from foreign influences” will see local officials be given extra-legal powers to combat “extremism”.

“Our challenge is to fight against those who go off the rails in the name of religion … while protecting those who believe in Islam and are full citizens of the republic.”

His speech today represented a broad outline of future measures, with a more thorough plan expected to be drawn up in the next two weeks in preparation for a bill to strengthen a 1905 law which will be presented in December of this year.

Some of the measures include placing mosques under greater control and will put a gradual end of the long-established practice of bringing Imams from other Middle Eastern countries – especially during the month of Ramadan – instead ensuring any Imam arriving from abroad receives training in France before gaining their certification.

It will also require children from the age of 3 to attend French schools, a place Macron said was “the heart of secularism where children become citizens”[6] and that “secularism is the cement of a united France.”

In addition, Macron said outward displays of “religious” affiliation would be banned in schools and the public service. Wearing the hijab is already banned in French schools and for public servants at their workplace.

Meanwhile, Roshan Salih suggested a quicker and less violent solution to the problems Macron claimed to want to tackle:

#EmmanuelMacron needs to realise that once France stops intervening military in Muslim countries and starts treating Muslims as equal citizens then there’s a real possibility that communal relations in France will improve.