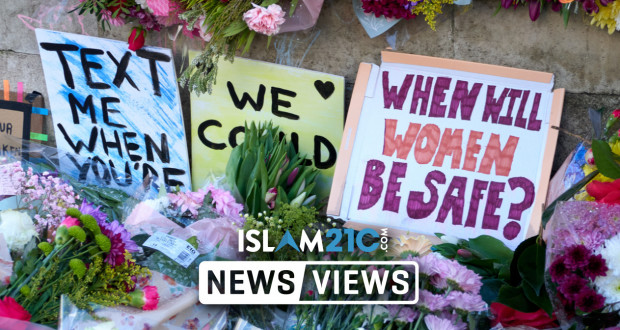 In March of this year, the shocking disappearance, rape, and murder of 33-year-old marketing executive Sarah Everard caused unprecedented outrage throughout the UK. Whilst the police investigated her disappearance, mainstream media released regular updates. Candlelit vigils were held across numerous British cities including Leeds, Nottingham, Sheffield, and Birmingham. Such expressions of sorrow for Everard culminated in the Clapham Common vigil of March 13, where Catherine, Duchess of Cambridge, was one of the hundreds of attendees. Indeed, she reportedly sent a personal letter to Everard’s family in which she sought to express her “sadness and sympathy”. [1] [2]

Juxtapose the tragic case of Sarah Everard with the equally appalling case of the 28-year-old British-Bangladeshi teacher Sabina Nessa. The Metropolitan Police believe that the Greenwich Year 1 educator was murdered while walking through Cator Park, South East London, on the evening of Friday 17 September. At around 17:30 on Saturday, a dog walker discovered Nessa’s body close to the OneSpace community centre, which is situated within the park. A post-mortem examination was carried out at Greenwich Mortuary on Monday, but the results were ruled inconclusive. Separately, two men have been arrested on suspicion of her murder, but one has since been released pending further investigation, while another remains in custody. [3] [4]

Page 25 !!! This happened on Friday in London. No marches or candlelit vigils for Sabina Nessa. Shameful. pic.twitter.com/gcyU2d2033

Zubel Ahmed, a cousin of Nessa, spoke to reporters concerning his family’s grief; the shocking events had left them “inconsolable”. He described the slain educator as “the most caring person – kindest, sweetest girl you could meet”. [5]

“She’s been teaching for two years. Loves teaching, loves kids, she’s got a couple of cats at home. She was just a beautiful soul.” [5]

On encouraging the public to support the Metropolitan Police in their ongoing murder investigation, Detective Inspector Joe Garrity said:

“Our investigation is making good progress and specialist officers remain at the crime scene carrying out intensive searches and enquiries.

“We are incredibly grateful for all of those who have so far come forward and spoken to us but we believe there are still others out there who may have information that could help. If you think you saw Sabina or any suspicious behaviour in or around the park on Friday evening please speak to us.” [3]

“Sabina’s journey should have taken just over five minutes but she never made it to her destination. We know the community are rightly shocked by this murder – as are we – and we are using every resource available to us to find the individual responsible.” [3]

Question marks are being raised concerning the subdued level of reporting by mainstream media outlets. This is particularly so when considering the public’s response to the brutal abduction and murder of Sarah Everard, who was White British. It is essential to make note of Everard’s ethnic classification when considering Sabina Nessa’s case. During the past year, the latter taught at Rushey Green Primary school in Catford. As a British Asian, Nessa was thus a part of the broader BAME (Black, Asian, and minority ethnic) community.

Writing in The Independent, the author and journalist Hira Ali drew attention to research undertaken by the Office for National Statistics that shockingly found that BAME citizens are more likely to be sexually assaulted.

“This blatant inequity is not mere perception, however. After Sarah Everard’s murder, the Office for National Statistics (ONS) revealed that adults of Black and mixed ethnicity were more likely to experience sexual assault, yet police discrimination has left minority victims out in the cold. This is further reflected in the way such stories are reported.” [6]

Further compounding matters in Nessa’s murder case is one particular line of police enquiry. It was suggested that a stranger may have attacked her during the “five-minute” walk to a restaurant where she was due to meet a friend. At a press conference, when asked whether detectives suspect Nessa was attacked by an unfamiliar person, Detective Chief Superintendent Lawry of the Metropolitan Police said, “That is definitely a line of inquiry that we are looking at”. [7]

In addition, the fact that police believe the perpetrator attacked Nessa in a public area at a time when “the park was likely being used by many people from dog walkers to joggers” has caused complete incomprehension in the local community. [8] Women in Kidbrooke, where Nessa lived, are undoubtedly fearful that further attacks may occur. In response, police have ramped up patrols for the next few days in order to try to reassure the public of their safety.

In the wake of both Sarah Everard and Sabina Nessa’s heinous murders, the government has yet again been sharply criticised for not doing enough to tackle violence against women. With chilling research in 2017 suggesting that one woman dies every three days at the hands of a man, the government released a violence against women and girls programme (VAWG) in July. It has also attempted to push for better support services in local communities. [9] [10]

However, Annie Gibbs, the founder of the community interest company Amour Destiné, which supports black women and girls, argued in 2017 that such changes were not enough. She suggested that in the face of mounting anger about violence against women, the government was still not heeding these calls.

“The focus is still very much about making women feel safe, and we’ve got great strategies around that. But how much longer is it going to be women’s responsibility to keep themselves safe? What we need is a strategy that is going to focus on stopping people’s harmful behaviours.” [9]