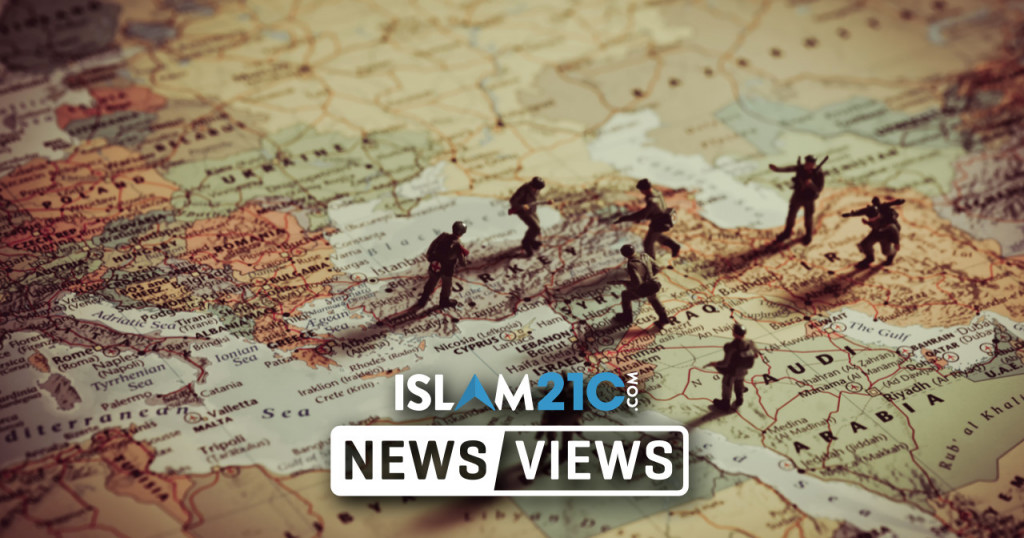 In August, US, UK, and NATO forces left Afghanistan in chaotic scenes reminiscent of the retreat from Saigon in 1975. Sounds of gunfire filled the night sky as jubilant citizens expressed their excitement and optimism for a new future without any foreign occupation or control. However, the happiness came with renewed sadness, as the Muslim world continues to reflect on the hundreds of thousands of innocent lives lost due to the West’s so-called War on Terror. In an English and Arabic language statement signed by academic associations consisting of over two hundred members, Muslim scholars across the globe have taken decisive action. They have called for the immediate cessation to the so-called Global War on Terrorism, which has led to twenty-plus years of attacks against Muslims throughout dozens of countries. [1]

Emphasising the decades-long exercise by the US and its allies to wage “a worldwide war without any borders nor any time limit” from 2001, the statement reflects on the events of 9/11 and the ensuing carnage that has devastated the Muslim world. Impacted lands include Somalia, Palestine, Iraq, Yemen, and others. It paints a picture that would be more suitably named the War of Error rather than the War on Terror. [1]

“20 years have passed since leaders of the United States declared a worldwide war without any borders nor any time limit. The so called ‘War on Terror’ was announced after the events of 9/11 but the aggression against Muslim people began before this time: Iraq war of 1991 and subsequent sanctions, invasion of Somalia, support for Israeli occupation of Palestine; support for brutal dictatorships in Muslim countries.

“In 20 years, at least 800,000 Muslims have been killed, thousands have been imprisoned unlawfully and often tortured, 37 million people have been displaced. Muslim people everywhere are treated with suspicion and cast as threats to the societies they live in. The entire world has been made less safe and less secure.

“20 years on, it is time to pause and take lessons. It is time for astute leaders in the West to correct the course.” [1]

The statement comes shortly after the Taliban announced the restoration of the Islamic Emirate of Afghanistan, and over a month after coalition forces fled Afghanistan following two decades of occupation and destruction. The conflict led to the demise of 47,245 civilians, a further 51,191 members of the Taliban and other resistance fighters, and 2,448 US army personnel. Afghanistan was one of the first countries that America, Britain, and other NATO forces targeted at the turn of the century, with numerous Muslim countries subsequently ravaged in the wake of the ‘War on Terror’. [2] The conflict has so far seen the mountainous landlocked Afghanistan invaded in October 2001; Yemen tormented with drone strikes from 2002; and Iraq invaded in March 2003. From 2004 to 2020, The Bureau of Investigative Journalism notes that there have been 336 “minimum confirmed strikes” courtesy of armed drones in Yemen, which have tragically killed approximately 1,300. [3] Since the US invasion of Iraq in 2003, according to the Iraq Body Count there have been at least 200,000 violent civilian deaths. [4] Furthermore, according to research undertaken by the Watson Institute for International and Public Affairs, since 2001 there have been at least 71,000 civilian deaths in Afghanistan and Pakistan. [5]

In the concise scholarly statement, the cosignatories make six key demands, which include “accountability of all governments, their agencies and their officials that were involved in crimes or abuses since 2001; as well as reparations for survivors and victims’ families”. Moreover, the collective of international scholars called for “leaders in the West to replace their policy of war and animosity against Muslim people with one of respect and mutual cooperation” and to put a stop “to all military and political interventions in Muslim countries”. [1]

“It can be argued that it was September 18th, and not September 11th, that changed the world. Apart from Barbara Lee, every single member of the US congress supported this resolution which subsequently led to illegal invasions, war crimes, torture sites, targeted assassination programmes and mass curtailment of civil liberties across the world.”

“It is therefore a poignant moment for Muslim scholars across the world to come together to strongly demand an end to the War on Terror and call for accountability for all those who were responsible for its crimes. The international scope of the signatories demonstrates the global scholarly agreement on this issue.”

The cosignatories of this statement include the following: