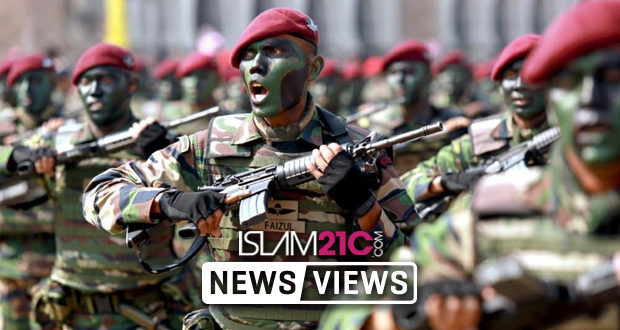 The Malaysian defence minister, Hishammuddin Hussein, has said that the Malaysian Armed Forces are prepared to perform their duty and are awaiting instructions from the top leadership with regards to Al-Quds (Jerusalem).

The minister said that the US decision to recognise Jerusalem as the capital of “Israel” was “a slap in the face for the entire Muslim world”. [1] Hussein stated that,

“We have to be prepared for any possibilities. The ATM [Malaysian Armed Forces] has always been ready, waiting for instructions from the top leadership.” [2]

US President Trump’s recent provocations have sparked worldwide outrage and ignited demonstrations from east to west. Hamas called for an uprising against Israel on Friday, calling it a “Day of Rage”. Tensions have risen across the Palestinian territories as Israeli forces intimidate demonstratiors trying to disperse the large crowds, injuring and detaining dozens.

On Friday, the Red Crescent said that its workers had attended to nearly 800 injuries in the occupied West Bank, East Jerusalem and Gaza Strip. [4]

On Sunday, around 10,000 Indonesians gathered in support of Palestinians and protested outside the US embassy. Demonstrators, carried posters and banners that read “U.S. Embassy, Get Out from Al Quds,” ″Free Jerusalem and Palestinians” and “We are with the Palestinians.” [5]

Indonesia has the world’s largest population of Muslims and has been a long-time supporter of the Palestinian people, with no diplomatic ties with the Zionist state.