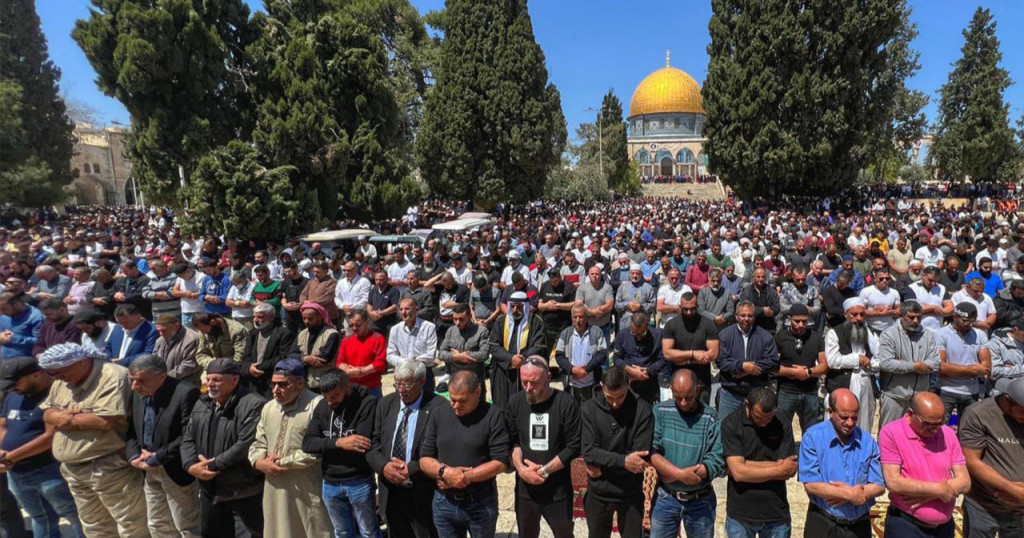 Israeli Occupation Forces (IOF) on Friday invaded the Al-Aqsa Mosque and the surrounding Al-Haram Al-Sharif compound in the occupied city of Jerusalem (Al-Quds), attacking Palestinian worshippers and injuring hundreds in the process.

According to the Palestinian Red Crescent Society that treated the injured Palestinians [1], the IOF entered the compound before sunrise as thousands of Palestinian worshippers began the day’s fast and prepared for the dawn prayer.

Further to attacking the defenceless worshippers, the occupation forces reportedly prevented the arrival and access of medics and ambulances to those gravely injured by Israeli aggression in the Mosque and as a result dozens of injured worshippers laid trapped in the compound.

The IOF claim their invasion was in response to a supposed violent crowd that had gathered outside the Al-Aqsa Mosque but there are no credible reports to verify this claim and video footage circulating on social media shows IOF forces firing tear gas and rubber bullets at defenceless Palestinian worshippers barricaded in the Mosque.

In one video, taken at the entrance to the Al-Aqsa Mosque, an “Israeli” policeman can be seen violently shoving an old Palestinian worshipper. The old man was simply standing there and was in no way violent or aggressive to the occupation forces. [2]

Explosions from tear gas canisters and stun grenades rang loudly and simultaneously throughout the Mosque and the structure’s beautiful and ornate stained glass was shattered as occupation militias fired rubber bullets through them.

According to local reports, occupation forces invaded the Haram Al-Sharif compound without any pretext, warning or explanation. This uncalled for and unprovoked escalation of violence came amid calls by far-right and fascists zionist groups for raids against the Al-Aqsa Mosque during the Jewish Passover holiday.

Friday’s violence by the occupation fighters signifies an annual trend by the Israeli government in which settlers of the last remaining European colony in the Middle East routinely and violently attack harmless and defenceless Palestinian worshippers in the blessed and holy month of Ramadan.

In 2021, the IOF carried out similar violent attacks against worshippers observing the nightly Tarawih prayers, indiscriminately firing stun grenades, tear gas and rubber bullets at worshippers as they stood in prayer. These unprovoked attacks force the Palestinian worshippers to defend themselves with chairs and stones, for not doing so would lead to arrest or even death.

Despite the attacks, however, it is reported that over 50,000 worshippers attended Friday prayers in defiance of the occupation’s aggression, with #HandsOffAlAqsa trending on social media.