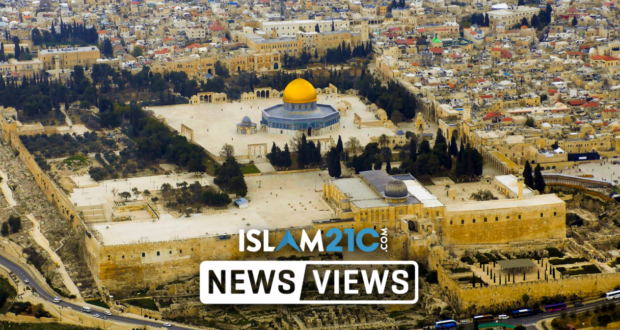 On Friday, Tens of thousands of worshippers descended on the Masjid al-Aqsa compound. The participants gathered for the first Friday prayers since the US President Donald Trump declared his Middle East plan that will supposedly “resolve” the decades-long conflict in the region.

The cold weather together with rain and strong winds did not stop thousands of men, women and children attending the Friday prayer in Jerusalem.

Following Trump’s announcement on Tuesday people vowed to demonstrate a strong presence at the third holiest site in Islam. In Trump’s plan, the holy site from the eighth-century that is significant for all three Abrahamic faiths, would be under the control of “Israel”.

Um Khaled al-Jawabri, who lives in a refugee camp in the occupied West Bank said that: “the deal is humiliating and unacceptable. Trump wants to deny us access to our Al-Aqsa. This holy site is ours. We will never give it up,”

Further adding that: “even if it requires sacrificing all our blood, Palestine’s capital will always be Jerusalem,” Thousands of Palestinians have denounced the plan and vow to fight against Trump’s plan stating that they will not give up “an inch” of land.

A 25-year-old resident of the Old City as well as a volunteer paramedic at the Al-Aqsa Mosque, Ahmad Hamad said that the deal was an offensive plan to “take away Al-Aqsa from us [Palestinians]…We reject this deal, especially since it impacts our right to Al-Aqsa,”

He further added that: “As Palestinians, we will never give up a single inch of this land, or of our holy sites whether it’s the al-Haram al-Sharif or the Church of Holy Sepulchre,”

According to Hamad a large crowd gathered for the morning prayers at the Masjid where “ten worshippers were injured after Israeli forces used rubber bullets to disperse the crowd,”. According to the Islamic Waqf organisation 11 people were reportedly wounded.

Hamad further added that the worshippers will not be deterred by any pressure and that they will continue to come to prayers in large numbers. He said: “We will keep coming in larger and stronger numbers…If we are ever denied access to Al-Aqsa, there will be a war.”

A 20-year-old student in Jerusalem, Noor Abdellatif, said that she was angered by the announcement of the deal, however she added that she could not take the declaration seriously after Trump called the holy site “Al-Aqua Mosque” as opposed to Al-Aqsa Mosque.

“Trump doesn’t know what he is talking about. He doesn’t understand what Al-Aqsa means to us. He couldn’t even pronounce its name…He doesn’t realise we will all stand up for Al-Aqsa if he touches it,”

Read Also: Cattle, Herders, and the ‘Deal of the Century’

2020-01-31
Hamad Momin
Previous: Unscripted #39 | A BIGGER threat than Coronavirus… | Dr Imran Qureshi
Next: Erdogan on Trump’s Mideast plan: “When will you raise your voice?”