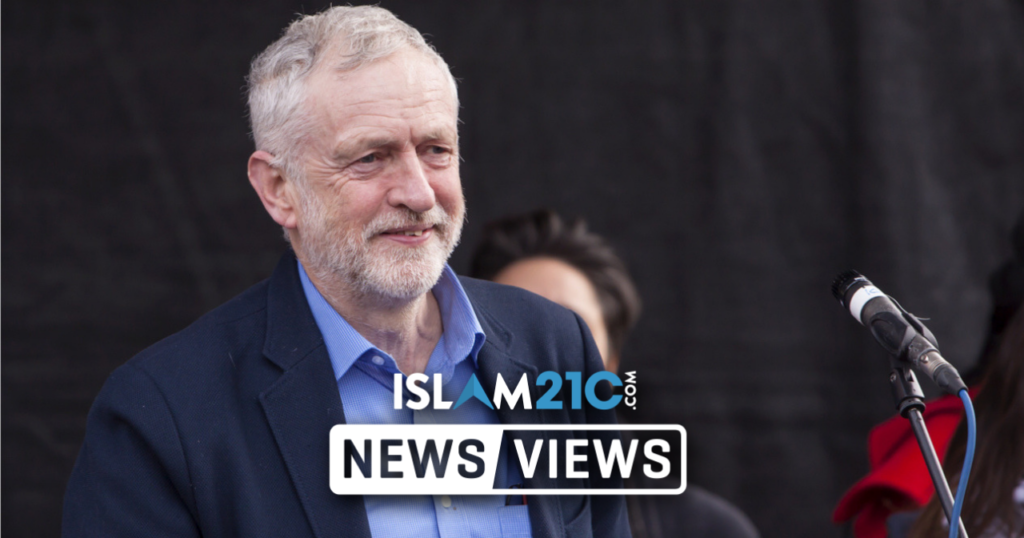 British prime minister Theresa May demanded an apology from the leader of the Labour Party, Jeremy Corbyn, over the party’s supposed antisemitism crisis during a rowdy prime minister’s question time on Wednesday.

May, who was forced to resign in June over the chaos she created out of Brexit, accused Corbyn of not taking responsibility in tackling the ‘anti-Jewish prejudice’ that is supposedly rampant in his party. Moreover, she mockingly described Corbyn as parading in Parliament as the champion of the people.

“There is an issue Mr Speaker that needs to be addressed in this House and before the right honourable gentleman stands up and parades himself as the champion of climate change or the champion of the people or the defender of equality and fairness, he needs to stand up and apologise for his failure to deal with racism in the Labour party.” [1]

Corbyn replied by reminding May that the Labour party was the first party that introduced anti-racism laws in the UK and opposes racism in all forms, including that of antisemitism. Corbyn drew on Labour’s large and diverse membership, which numbers at 512,000, the largest of any party in Western Europe, and said that such accusations are being used to damage the leadership of the party, undermine its radical policies, and silence any legitimate criticism of the ‘Israeli’ government.

The Labour head told May to reflect on the consequences and impact of her immigration policies when she was home secretary, which saw many migrant families that had been living in the UK for decades and contributed to its society forcibly returned back to their countries of origin.

“Coming from a prime minister who encouraged the hostile environment, sent ‘go home’ vans around London and deported British citizens, I think she might look to her own party’s and government’s records as well.” 1

Corbyn also reminded May of her refusal to acknowledge the issue of the rampant Islamophobia within the Conservative party and her failure at tackling and reprimanding those members and MPs who have openly been Islamophobic. Moreover, he reminded her of her failure to criticise Boris Johnson, who is tipped to become the next prime minister, for making Islamophobic remarks and comparing Muslim women who wear the niqāb and burqa to letter boxes and bank robbers.

“And when 60% of Tory party members think Islam is a threat to western civilisation and the prime minister has said she will act on Islamophobia within her own party, I hope she does, I look forward to seeing that being dealt with as we will deal with any racism that occurs within our own party as well.” 1

It is clear that the Labour party is not antisemitic; rather it is critical of the actions undertaken by the ‘Israeli’ government against the Palestinian people and thus, presents legitimate concerns. Unlike the Conservative Party, Labour and Corbyn have voiced their concerns over the ‘Israeli’ aggression against Palestinians and their oppression in the occupied West Bank and Gaza Strip.

However, critics of Corbyn and his radical plan at transforming the UK have promptly generalised these legitimate concerns and criticism under the erroneous title of antisemitism and have done so to undermine his leadership and quash any and all criticisms of ‘Israel’.

All the while Islamophobia in the Conservative Party goes unnoticed and the government has time and again failed to investigate this serious issue, let alone adopt the all-party parliamentary group on British Muslims’ definition of Islamophobia. Despite home secretary Sajid Javid’s promises to hold an investigation, such ideas have been watered down to ‘general investigations’ into racism and not Islamophobia exclusively.

May’s attack on Corbyn and Corbyn’s apt response appears to have revealed the hypocrisy of the outgoing prime minister Accusing Corbyn of failing to tackle racism within the Labour party and refusing to accept responsibility over the alleged ‘crisis’, whilst she herself failed in taking action against the many Islamophobes currently present in her party, has revealed her double standards.

Senior Tory member of the House of Lords, Sayeeda Warsi, called out her party for reinstating members who had previously been suspended for making Islamophobic comments and allowing them to run in local elections. She has received death threats online for coming out and publicly raising these issues. One of these threats she faced down was on 13th April 2018 during the so-called ‘Punish a Muslim’ day when violent literature was sent out to Muslim MPs, threatening attacks and violence against them.

Earlier this year, 14 members of the Conservative Party were suspended for posting Islamophobic comments on a Tory Facebook group, amongst many that read “turf all Muslims out of public office” another asking “to get rid of all mosques”, and members attacking home secretary Sajid Javid and warning against “voting for Islam”. [2] These posts were collected and archived by a Twitter account that documents Islamophobic rhetoric in the Conservative party.

Similarly, two Tory councillors resigned from the party after being found to have endorsed Islamophobic posts on their Facebook accounts. Len Milner and Chris Smith had liked a cartoon that depicted London Mayor Sadiq Khan being beheaded by the queen. Another councillor has been suspended for retweeting a Twitter post that praises former English Defence Leader Tommy Robinson, a well-known anti-Muslim ‘activist’.

The recent suspensions and resignations are not the only examples of Islamophobia within the party. In November 2018, former foreign secretary, Boris Johnson, compared Muslim women who wear the ḥijāb and burqa as “letter boxes and bank robbers” in an article in the Daily Telegraph and was found to have not committed any wrong doing by an internal inquiry conducted by the party. [3]

Last month, Tory MP, Henry Smith, claimed that he had “never come across any of that [Islamophobia] in the Conservative party”, in a debate on BBC Politics Live that was discussing Islamophobia and the government’s response to the matter. [4] Warsi said that Smith’s denial of Islamophobia within the party showed that he was “refusing to confront the issue”.

In the last three years, there has been a sharp rise in Islamophobia and anti-Muslim hate crime in the UK, with 2017 having a record number of attacks against Muslims. In 2018, there were over 1,200 reports of Islamophobic attacks, a 26% surge from the previous year. Islamophobic incidents have risen significantly due to a number of factors, such as Brexit and the proliferation of ‘far-right’ groups manipulating peoples’ misconceptions on immigration and faith.