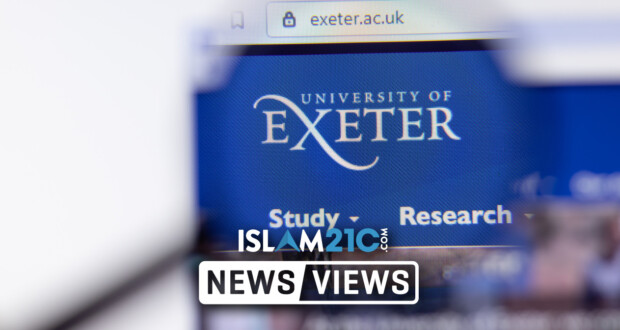 Students at the University of Exeter have criticised their institution for having links with proponents of the Uyghur genocide.

In a critical article on the university’s independent student newspaper Exeposé, Flo Marks and Diana Jalea strongly call on Exeter students to sign their open letter, which seeks to cease the university’s academic relationship with Tsinghua University in Beijing. The latter institution is accused of masterminding and laying the groundwork for the extremely oppressive policies that are implemented on the Turkic-Muslim minorities residing in East Turkestan, or “Xinjiang” as the Chinese government terms the region. The article in the student newspaper also encourages students to support the UK-based Stop Uyghur Genocide campaign. [1] [2] [3]

Marks and Jalea argue that the University of Exeter – along with other British higher education institutions – has existing links to organisations that are directly supporting the oppression of the Uyghur people. In order to make a firm stand against the tacit acceptance of the ongoing genocide, Marks and Jalea argue that individual letters should be written and delivered to MPs, as well as signing the open letter that aims to draw attention to university leaders at Exeter.

The article begins by calling “on all Exeter Students to sign our open letter to show your solidarity and support for the Stop Uyghur Genocide campaign and for Exeter to eliminate its ties with organisations that have links to the genocide.” [1]

It goes further by detailing the oft-neglected point that amongst the Turkic-Muslim minorities who are situated in East Turkestan, the Uyghurs are only one group that are being adversely affected by the aim of the Chinese Communist Party (CCP) to brainwash and eradicate the region’s people of their heritage, culture, religion, and humanity.

Uzbeks, Kazakhs, as well as Uyghurs are being treated in horrendous ways, with an emphasis made on the sheer scale of the abuse of women.

As the article details further:

“Although the genocide is affecting most minorities in the region, the crimes against Turkic-Muslim women are particularly horrific; the brave testimonies of women who have escaped from the camps outline the gang rapes, beatings, forced sterilisation and abortions taking place. Women that aren’t in the camps have been separated from their families, forced to live with Han men and treated as slaves in the factories of some of the world’s largest companies.” [1]

The Chinese government has continued to fiercely oppose those who seek to call it out for its genocidal acts in East Turkestan.

The US, UK, EU, and Canada all recently implemented sanctions on a number of men widely held responsible for the development and continued operations of concentration camps, as well as the appalling torture being perpetrated upon many of the Turkic Muslims in “Xinjiang”. The CCP immediately slapped sanctions in tit-for-tat measures, which only further proves the point that it is uninterested in accepting its wrongdoings and would rather retaliate by lashing out in the face of the truth. [4]

The Chinese Government are sanctioning those speaking out against Genocide. They’re trying silence us. They’ll only increase the volume. https://t.co/qH5SIfSIQe

Speaking at length about the history of the Uyghur oppression, the article discusses incumbent Chinese president Xi Jinping’s dramatic shift in 2010 away from what was previously termed the “golden era” in relations with ethnic minorities in the 1980s – a time that extreme academics in China now refer to as the so-called “first-generation ethnic policy”.

The news piece elaborates to explain:

“Up until relatively recently, ethnic minorities were enjoying a certain level of ethnic and cultural autonomy, with some voluntary assimilation to ensure the growing wealth of China is shared equally.” [1]

The tragic reality is laid bare in the explosive report, with reference made to the current policy aims as guided and led by Xi Jinping.

Furthermore, the article names Hu Lianhe and Hu Angang, who are reported to be the “founding fathers” of the “second-generation ethnic policy”, which was co-written in 2011 and advocates for the benefits of a single race-state. It is noteworthy that Hu Angang is the Director of Tsinghua University’s Institute for Contemporary China Studies, which has ties to the University of Exeter. [5]

Marks and Jalea add in the Exeposé article:

The policy of “Becoming Family” (结对认亲), initiated by Beijing in 2016, is of utmost worry, with reports of Turkic-Muslim women being forced to live with ethnic Chinese Han men once the women’s husbands have been detained in camps.

The women are subject to rape and forced insemination, which the CCP believes will be a step towards “forced assimilation”, effectively by the births of children with ethnically Han fathers. The aim is to gradually erode the cultural fabric of the Turkic-Muslim minorities, as well as stripping these innocent women of their humanity. [7]

In response to a request for comment from Exeposé, the University of Exeter said:

“Before entering into any new link, the University employs robust procedures and due diligence processes. We also ensure that we are following the most up-to-date guidance and regulations from the UK Government and Universities UK on these links. To date, that advice has been that we should continue our connections with China, as a part of the UK’s extensive education and cultural links with the country.” [1]

“We take an active stand against all forms of racism and prejudice. We expect our entire community to uphold our values around equality, diversity and inclusion and strive to be part of the most compassionate institution possible.” [1]

To support the campaign against the ongoing Uyghur genocide, Exeter students may sign the open letter by clicking here