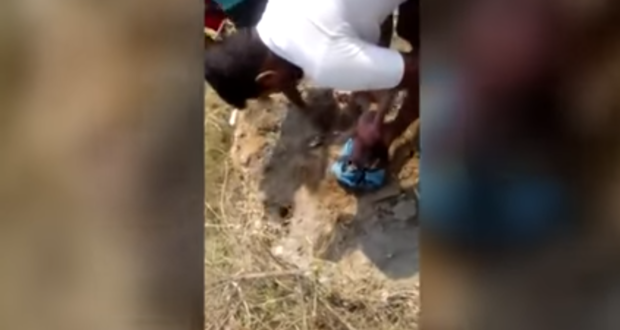 Incredible footage has emerged of Indian villagers saving the life of a newborn baby girl who was buried alive hours after birth.

The grim footage is a throwback to widespread jāhili (pre-Islamic) practices which the ‘radical’ message of Islam originally brought an end to. However, as has been seen increasingly in recent years, such practices are regaining popularity.

The crude burial of baby girls is on the same moral continuum as the more elaborate, polished, articulate justifications that exist for terminating fully-formed babies in the womb. Although the latter are always accompanied by a cognitive dissonance and an ignoring of any imagery, it still relies on a simple moral premise: the denying of ‘personhood’ or human status.

Sex-selective abortion is common across the world and has been defended by many who advocate for the moral permissibility of abortion generally since it relies on a fundamental denial of human status to those in the womb. It is no surprise then that only days ago an “ethics expert” from the British Medical Association argued publicly for permitting sex-selective abortions.[1]

Normally, those that do not believe in human- or person-status for unborn children tend to give such rights to children after birth. However, some have been increasingly arguing for renaming infanticide to ‘after-birth abortion’, as in one paper published in the Journal of Medical Ethics.[2] If one denies that the child in the womb has rights, and thus permits morally for others to end its life, then it is not a large leap to extend that to after birth, as some “pro-choice” campaigners are increasingly entertaining.[3]

As disagreeable as some of their arguments might sound to those who argue against them, their reasoning appears to be consistent; what we fundamentally disagree with is their premise of denying human-status or personhood to the baby in the first place. And it is this premise that should be the locus of discussion for, in humans, birth is at an apparently arbitrary point in one’s development. Children are born whilst still fully dependent on their mothers, in contrast to many other species of life.

The argument of granting human or person status to various groups is one that has occurred in the non-Islamic world for many centuries, whether they were women, non-whites, or those subjected to colonial aggression. The Qur’ān however issues a stern warning to those who take it upon themselves to grant some life more rights than others; invariably privileging themselves.

When the sun is shrouded in darkness, when the stars are dimmed, when the mountains are set in motion, when pregnant camels are abandoned, when wild beasts are herded together, when the seas boil over, when souls are sorted into classes, when the baby girl buried alive is asked for what sin she was killed, when the records of deeds are spread open, when the sky is stripped away, when Hell is made to blaze and Paradise brought near: then every soul will know what it has brought about.[4]

Prophet (sall Allāhu ʿalayhī wa sallam) said: “Whoever has three daughters and he cares for them, he is merciful to them, and he clothes them, then Paradise is certainly required for him.” It was said, “O Messenger of Allāh, what if he has only two?” The Prophet (sall Allāhu ʿalayhī wa sallam) said, “Even two.” Some people thought that if they had said to him one, the Prophet would have said even one.[5]

The taking of life, even that of a fly, is a serious matter for the One who created that life and to Whom it belongs. Wise human beings should learn from the mistakes and arrogance of those before them who denied human status to others, and at least err on the side of caution.

[4] Opening section of the 81st chapter of the Qur’ān.

Previous: Unlock the barakah of Ramadan NOW
Next: “I thought Muslims wanted to take over. But then…”