Are you ready for our first ever NATIONAL CAMPAIGN?
Home / News / Modi rolls out red carpet for Saudi prince MBS 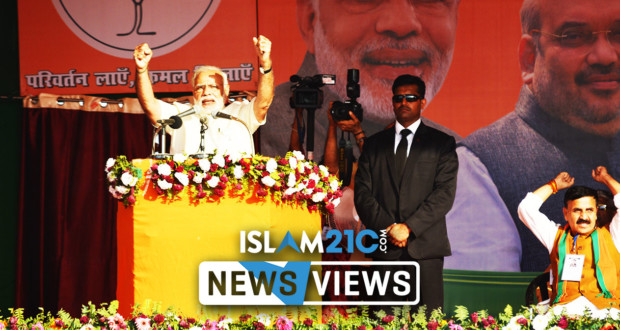 MBS’ visit follows hot on the heels of his lavish visit to Pakistan in which $20 billion from the Saudi coffers was secured by the host nation. However, the Crown Prince said he expected to invest $100 billion in India over the next two years:

“Today we expect the opportunities we are targeting in India in various fields to exceed $100 billion in the coming two years… we want to work with you, Mr Prime Minister, to ensure these investments are made and to ensure useful returns for both countries.”[1]

In addition, the two leaders in a joint press conference spoke of terrorism being a common concern, with MBS agreeing to share intelligence with India. The Crown Prince’s visit follows an attack on Indian troops in occupied Kashmir, which India – predictably and without evidence – lays at the door of Pakistan. Islamabad denies any involvement and has called for an investigation.

The Crown Prince said: “We face similar challenges, chief among them extremism and terrorism … and we reaffirm to India that we are ready to work in the intelligence and political arenas to coordinate our efforts…”[2]

In addition, the Crown Prince agreed to release 850 Indian criminals being held in Saudi at the request of Modi. Muhammad Bin Salman spoke of his admiration for Modi and how he considered him an “elder brother”.[3]  Commentators were quick to point out that Modi is responsible for some of the worst religious violence ever seen in Independent India during the frenzied murder and rape pogrom in Gujurat.

On February 27, 2002, a train coach carrying Hindu Pilgrims caught fire at Godhra station in Gujurat. 58 people died. Modi moved quickly and blamed Pakistan’s ISI (security service) without evidence. To further stoke tensions in an already febrile atmosphere, Modi had the charred bodies paraded in the main city of Ahmedabad. What followed was perhaps predictable. Thousands of Muslims were butchered. Mobs of Hindu men dragged mothers and daughters from their homes and raped them. One ring leader Babu Bajrangi, later boasted how he had slit open the womb of a pregnant Muslim woman.[4]

The Prime Minister of India said of the 2002 Gujarat bloodshed, that he felt the same pain as someone who had run over a puppy, with their car. Modi described the camps which housed 200,000 Muslims who had lost their homes as a result of the Gujurat massacre as “baby making factories.”[5]

Saudi Arabia is India’s primary supplier of crude oil, and could have exerted considerable pressure on Modi to improve the living conditions of the people of Jammu and Kashmir and indeed Muslims across India.  Against the menacing  backdrop of India’s growing Hinduvta movement, it appears to be a wasted opportunity.

2019-02-22
Dr Izzadeen Chowdhury
Previous: Jeremy Corbyn supports Shamima Begum’s plea to return to the UK
Next: What do ISIS & Islamophobes have in common? | Face to Face