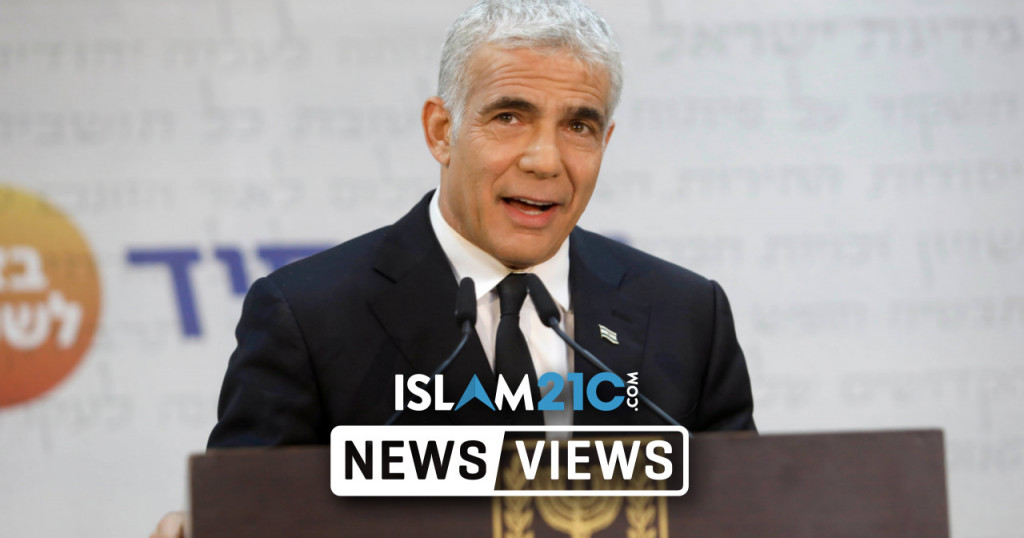 Closely following the symbolic yet noteworthy first direct commercial flight between ‘Israel’ and Morocco two weeks ago, an even more significant development has unfolded. Israeli Foreign Minister Yair Lapid has visited another Arab state that has ‘normalised’ diplomatic relations with the Zionist state and occupier of the Palestinian territories: Morocco. The trip to Morocco was the first by an Israeli Foreign Minister since 2003, and Lapid’s second such visit after his June trip to the UAE. [1] [2]

Prior to his trip, Lapid sought to promote the two-day visit, saying:

“This historic visit is a continuation of the long-standing friendship and deep roots and traditions that the Jewish community in Morocco, and the large community of Israelis with origins in Morocco, have.” [2]

During the visit, Lapid and his Moroccan counterpart, Nasser Bourita, met in the capital Rabat. The two officials signed a number of agreements on areas including aviation, sport, culture, and youth. On the final day of the visit, Bourita and Lapid inaugurated the Israeli liaison office. This office is expected to be superseded or be given an “upgrade” in its political status in the coming months. As Lapid, the chairman of centrist Israeli political party Yesh Atid, put it: “We are going to upgrade from liaison offices to embassies.” [3]

MFA Bourita and Mr. @yairlapid signed today an MoU for the establishment of political consultations mechanisms as well as two agreements in the fields of culture, youth, sports and air service. pic.twitter.com/ut0DfEYlcb

In recent years, Morocco is one of four Arab nations to have begun ‘normalisation’ proceedings with ‘Israel’. This occurred after US-brokered negotiations spearheaded by former President Donald Trump led to the so-called Abraham Accords being signed between the UAE, Bahrain, and the Zionist state in 2018.

We welcome the visit by Israeli Foreign Minister @yairlapid to Morocco and congratulate the Kingdom of Morocco and Israel on the reopening of the Israeli Liaison Office in Rabat. We will continue to work with Israel and Morocco to strengthen all aspects of our partnerships.

During Lapid’s visit, the US once again expressed its support for the development, saying through its embassy in Rabat:

“We congratulate our two close allies Israel and Morocco, and as U.S. Secretary of State Antony Blinken said yesterday, the United States will continue to work with them to strengthen all aspects of our partnerships and create a more peaceful, secure, and prosperous future for all the people of the Middle East.” [4] [5]

Lapid’s trip comes as both ‘Israel’ and Morocco grapple with the ongoing coronavirus pandemic, which is once again resurging with the spread of the Delta variant and other new strains. In December of last year, the two nations signed agreements concerning finance, aviation, and water. Last month, the pair signed a cyberdefence co-operation deal. That deal came shortly after the Pegasus scandal was exposed by The Guardian and its media partners. Over 50,000 individuals – including world leaders and prominent Muslims – were found to have been targeted by the Israeli-made Pegasus spyware, which had been sold to numerous authoritarian governments, including that of Morocco. [6] [7]