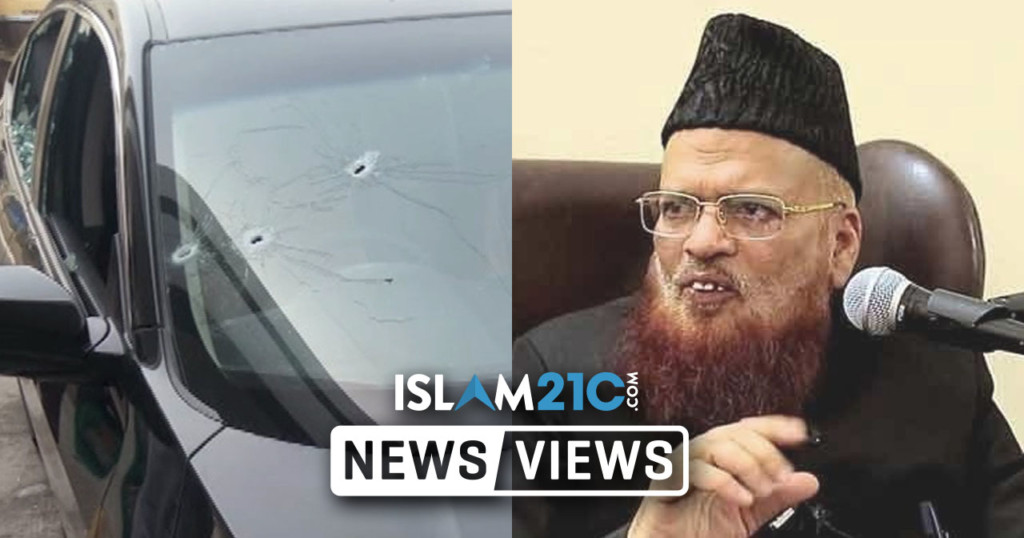 Mufti Taqi Usmani and his family have survived an assassination attempt after unidentified gunmen opened fire on two vehicles transporting them in Karachi.

Mufti Usmani’s two bodyguards, however, were shot dead in the attack. One guard was an official from the provincial Sindh police force and the other from a private company. The assailants were driving on motorcycles when the attack took place.

“Moulana Taqi Usmani was travelling in a black Honda Civic along with his family. The second car with his driver and guard was a Toyota Corolla. The cars were travelling together and were fired on by motorcyclists near the ramp which goes from Aladdin Park to NIPA Chowrangi,” [1] said Gulshan Tahir Noorani, superintendent of police.

“First, Moulana Taqi Usmani’s car was fired on in which his guard, a Sindh police official, and driver were shot. The driver took the car straight to Liaquat National Hospital. The second car crashed at NIPA Chowrangi in which Sanobar Khan was martyred and the driver Amir Shahab was injured,” [1] Noorani added.

Mufti Usmani was travelling with his wife and two grandsons, all of whom remained unhurt after the attack. According to the Mufti, the gunmen had opened fire at the back of their vehicle.

Prime minister Imran Khan condemned the assassination attempt on the senior scholar and expressed sadness over the killing of the bodyguards, saying that “the attack on an esteemed figure like Mufti Taqi Usmani is a conspiracy,” [1] and promised to find the perpetrators of the attack.

According to Imran Ismail, the governor of Sindh province, Mufti Usmani had been receiving death threats for some time and although security had been ramped up, it failed to prevent the attack from taking place.

Murray Ali Shah, chief minister of Sindh province, has ordered an immediate investigation into the attack and the arrest of the perpetrators.