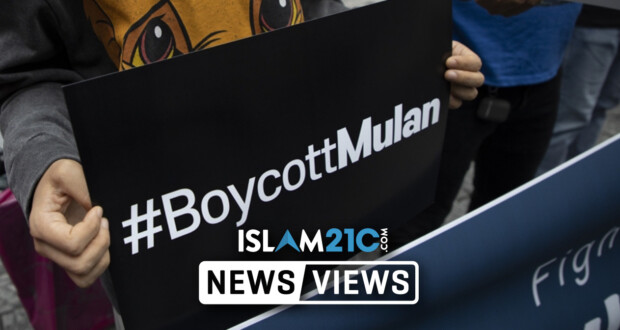 Protestors are calling for the boycott of Disney’s latest live-action remake, Mulan, after reports emerged that it had filmed scenes in the Xinjiang province, where the forced imprisonment and “re-education” of over one million Uyghur Muslims is no longer a secret, especially after the Chinese government described Islam as a “contagious and ideological illness”.[1]

This is not the first time the film with a $200 million budget has been tangled in political controversy. Calls for a boycott of the film began when the star of the film, Liu Yifei, made comments in support of the Hong Kong police force when pro-democracy protests erupted in the country.

The Chinese-born actress shared a message on Weibo, the popular Chinese social media platform, that read, “I support Hong Kong’s police, you can beat me up now.” She later added on the platform, “What a shame for Hong Kong.”

Since then, the #boycottmulan movement has grown on Twitter, gaining support from an array of activists warning people against being compliant with the mass incarceration of Muslim Uyghurs. This comes after social media users brought to light how Disney thanked a number of government entities in Xinjiang – despite international condemnation of the mass detention centres in the region – including the public security bureau in Turpan that is responsible for managing construction and hiring police to staff the “re-education” camps.[2]

This is truly outrageous: The new live-action Mulan THANKS the Turpan Public Security Bureau (in southern Xinjiang) in the credits. That specific public security bureau has been deeply involved in the Xinjiang concentration camps.

You know, the place where the cultural genocide is happening.

They filmed extensively in Xinjiang, which the subtitles call “Northwest China”#BoycottMulan pic.twitter.com/mba3oMYDvV

Among those thanked by Disney are the ‘publicity department of CPC Xinjiang Uyghur Autonomy Region Committee’, which researcher and China expert Adrian Zenz said are responsible for producing state propaganda in the region. Zenz added that Turpan was the site of the first “re-education camps” where Uyghur women wearing veils or men wearing beards were detained.

Turpan, whose police Disney thanked at the end of Mulan, is the first documented case of re-education against Muslim minorities in Xinjiang. This Aug 2013 doc speaks of the "re-education" of "focus groups" to "eradicate the soil for the breeding and spread of religious extremism" pic.twitter.com/cMe4PqKl6p

Yaqiu Wang, a researcher for Human Rights Watch China, commented how Disney should be transparent with any assistance it received from corporations in Xinjiang.

“Disney should disclose the details about the human rights due diligence it had conducted – if there was any – before making the decision to film in Xinjiang, what agreements it had made with Xinjiang authorities in order to do the filming, and what assistances it received from authorities.”

While Disney has not commented on the row, Zenz described the mass media and entertainment company as “an international corporation profiteering in the shadow of concentration camps”.

“It all feeds in the current national myth of China with inalienable borders. It isn’t just that this film was partly made in Xinjiang, a place where genocide is currently happening. It’s that this film frames those people who are currently having their culture being destroyed as the bad guys whilst lionising Han dominance and Chinese nationalism.”[3]

The revelation has sparked renewed anger at a time of heightened scrutiny over Hollywood’s willingness to bow to authoritarian China, a country that accounts for most of the international box office revenue of most of its new releases. In August, a report was published that said that screenwriters, producers, and directors often change scripts, delete scenes, and alter content to avoid offending Chinese censors.

Isaac Stone Fish, a senior fellow at the Asia Society, labelled the film as “arguably Disney’s most problematic movie.”

“Disney has thanked four propaganda departments and a public security bureau in Xinjiang, a region in northwest China that is the site of one of the world’s worst human rights abuses happening today.”[4]

The controversial film can no longer blame the coronavirus pandemic for its troubled release – it has itself to blame for that. Like the rest of the world, Disney embraced the social justice movement of “Black Lives Matter” but turned a blind eye on “Uyghur Lives Matter”, instead thanking the perpetrators of the indoctrinating crimes.

The value epitomised in the original film released in 1998 was one of identity, and was met with universal appeal. The irony is that China is cracking down on the identity of Uyghur Muslims. This new adaptation exists only to reap rewards at the Chinese box office, and has ended up supporting the Chinese government’s aims by indirectly participating in genocide.