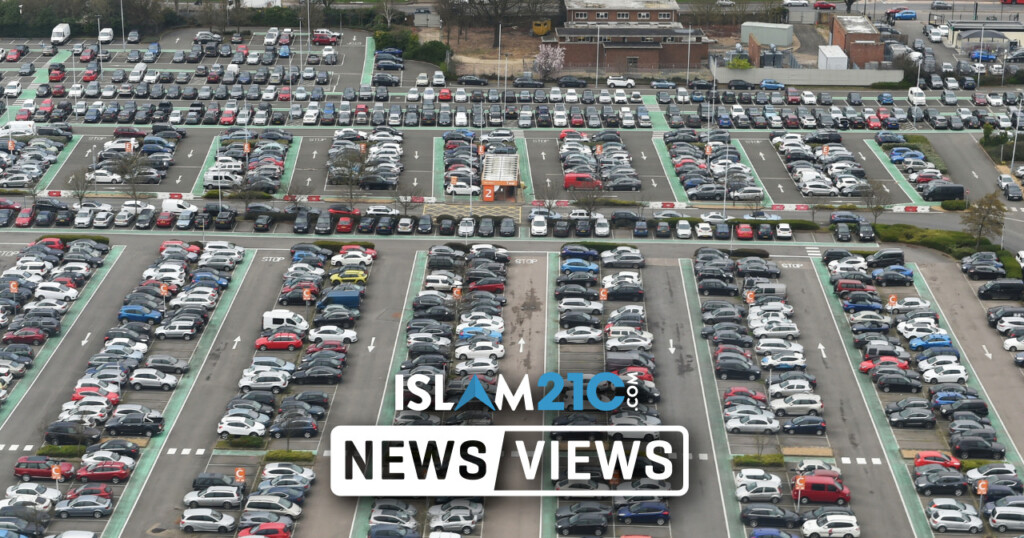 In appalling scenes within the grounds of the UK’s busiest airport, Muslim minicab drivers –who regularly pay an arm and a leg in daily parking charges – have expressed their sheer disappointment and feeling of humiliation after being left with no option but to perform their daily prayers in an open-air car park. [1]

The drivers – who pay approximately £20 a day to use the car park – have been making do by praying kerbside for over a year. After conditions recently deteriorated, the drivers have felt the need to instead pray in the car park.

One of the private hire drivers, Zamir Dreni, said of the “inhumane and degrading” situation:

“Recently, conditions have deteriorated to the point that I believe they are dangerous… I feel that the airport authorities treat us with complete contempt. We have tried to talking them, we even prepared a petition, but they have refused to listen to us or to take responsibility for the problems here…” [2]

To confound matters further, the toilet facilities and basins used to make ablution have been described as unhygienic.

BBC London’s transport and environment correspondent, Tom Edwards, took to Twitter to illustrate the unacceptable situation, tweeting a photograph of drivers praying in the cold and wet weather near a disused bus stop. In the tweet, Edwards also showed a photograph of nearly full toilet bins and floors filthy with mud and other contaminants.

NEW: Minicab drivers say conditions at app parking site at Heathrow where they have to wait for work are unsafe & demeaning. Prayers have to be in a disused bus shelter & toilets not clean. Airport says facilities are cleaned & can’t provide prayer areas due to health & safety. pic.twitter.com/SYlhfWJrhT

The App Drivers & Couriers Union (ADCU) – which represents many of the men braving the cold weather and praying in congregation – has said that the clear inaction by airport authorities in addressing this completely resolvable situation has put at risk the lives of drivers.

In response, Heathrow Airport said in a statement:

“The airport’s cleaning contractors regularly inspect and clean the facilities during peak periods, but we also expect the drivers using the site to keep the facilities in good condition.”  [3]

In addressing the ongoing issue, James Farrar, the general secretary of the ADCU, verbalised his frustration:

“People are praying in close proximity to moving traffic, it becomes a real risk for them.”

“If you are a devout Muslim, you must pray and too often it is inside that car park. What can we do?” [1]

During the ongoing COVID-19 crisis, Heathrow has blamed “health and safety” for its decision not to keep prayer rooms open in the airport, suggesting it would reopen them when “safe to do so”. However, the ADCU has recently lashed out at Heathrow for discriminating against “the 94% BAME PHV driver community” having to struggle outdoors in the middle of winter, whilst, reportedly, “100 yards down the road they provide 85% white British black cab drivers a purpose built block, lounge, cafe & big screens TV & collect less fees!”

It's not as if providing dignified facilities for the 94% BAME PHV driver community is beyond possibility for @HeathrowAirport. 100 yards down the road they provide 85% white British black cab drivers a purpose built block, lounge, cafe & big screens TV & collect less fees! pic.twitter.com/hAxRdCerf6