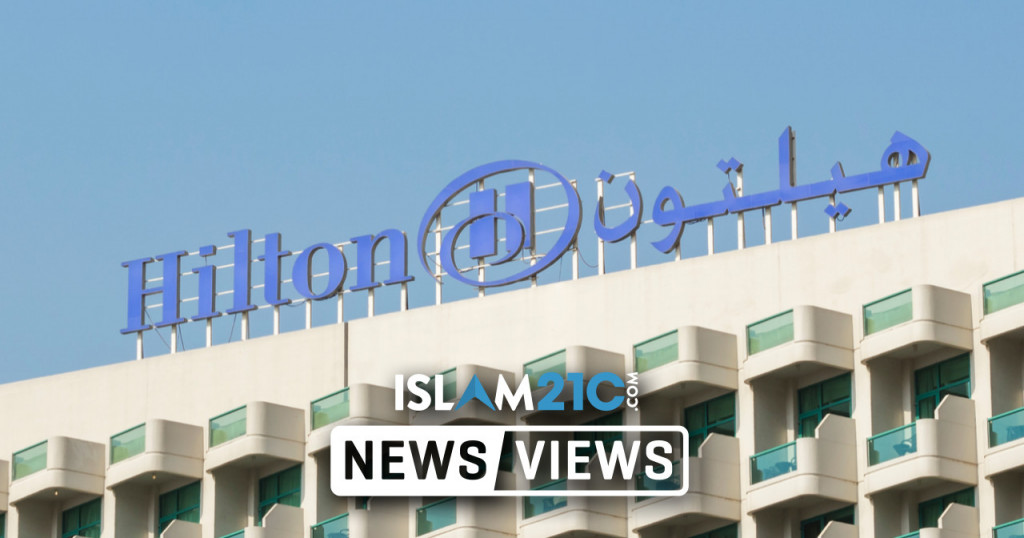 A collective of over 40 Muslim organisations have recently announced efforts to boycott the international hotel chain Hilton Worldwide. This comes after the corporation showed no sign of halting its plans to develop a hotel on the site of a former Uyghur masjid in East Turkestan. The prominent Muslim advocacy group called the Council on American-Islamic Relations (CAIR) tried to privately convince Hilton to drop its plans on several occasions. After continuing to ignore calls to abandon development plans on the site of the former Uyghur mosque, Hilton is at risk of being a willing participant in the genocide of China’s authoritarian Communist Party, by eradicating cultural, historical, and religious aspects of Uyghur society. [1] [2]

As a result of these new development plans, the Boycott Hilton Coalition was formed. These activist efforts began after The Telegraph revealed in June that the Chinese government is planning to create a new commercial site – including a Hilton hotel – on a plot of land where a former Uyghur mosque once stood in Hotan prefecture. And thanks to the backing of the largest American Muslim civil rights and advocacy organisation, CAIR, there have already been more than 3,000 signatures in support of the Hilton boycott. [3] [4]

“You and I have the choice to choose where to go on your travel or to do business meetings or to hold events, weddings or banquets.” [1]

On the Change.org petition, which has racked up thousands of signatories already in less than one week, the Coalition warns:

“Now we must act. Human rights activists, Uyghur rights groups, and civil rights organizations are joining together to launch an international boycott of Hilton in order to stop this project and deter other companies from enabling, supporting, or benefitting from the Chinese government’s atrocities against Uyghurs and other Turkic Muslims.” [4]

Amongst the 40 organisations that have collaborated with CAIR are the World Uyghur Congress, Campaign for Uyghurs, and the Burmese Rohingya Association of North America (BRANA). In addition, international organisations such as the Muslim Council of Britain, France’s Justice for Liberties and All Committee, and the Belgium Uyghur Association have also lent their backing to the cause. The concerted effort comes closely after the people’s Uyghur Tribunal held its second batch of evidence gathering sessions in London.

Hearing from survivors of torture, rape, forced abortions, forced labour, and several other abuses, the human rights commission has shed much needed light on the genocidal state of Xinjiang (which is the name that the Chinese ruling party and state media use for the region of East Turkestan).

In horrific testimony in June, one veteran Uyghur teacher recalled how she was forced to ‘teach’ in one of the concentration camps or so-called “Vocational Education and Training Centers”. She recounted a conversation she had with a fellow imprisoned Uyghur woman:

“What’s not to believe these rumors? There is a reason male police officers would beg to come to this camp since there’re more pretty girls here. They take girls into the investigation rooms where there’s no camera, and 4-5 police officers rape one girl one after another. After raping, they take electric rods and stick it into their vagina and rectum to torture, and rape again after.” [5]

At the Uyghur Tribunal, further accounts of torture and abuse were levelled against the Chinese government earlier in September, but the likes of international corporations such as Hilton Worldwide appear undeterred in doing business there. Indeed, the smartphone and computer manufacturer Apple in 2020 reportedly lobbied against a US federal bill aimed at tackling Uyghur forced labour, whilst the proposed statute was going through the nation’s legislature.

Technically known as the H.R.6210 – Uyghur Forced Labor Prevention Act, the bill continues to move through Congress. Such a law would establish an unprecedented set of restrictions, including the prohibition of certain exports from the region of Xinjiang. It would also impose sanctions against actors responsible for human rights violations in the area. Companies including Apple would have to document and guarantee that products have not been made with the use of imprisoned or coerced workers. The US government would have to certify this attestation, and then grant permission to import the said goods from Xinjiang. [6]

Cathy Feingold, the director of the International Department at the AFL-CIO, the largest federation of workers’ unions in the US, said in November of last year:

“What Apple would like is we all just sit and talk and not have any real consequences…They’re shocked because it’s the first time where there could be some actual effective enforceability.” [7]