Muslim teenager reportedly dies after being set on fire in India 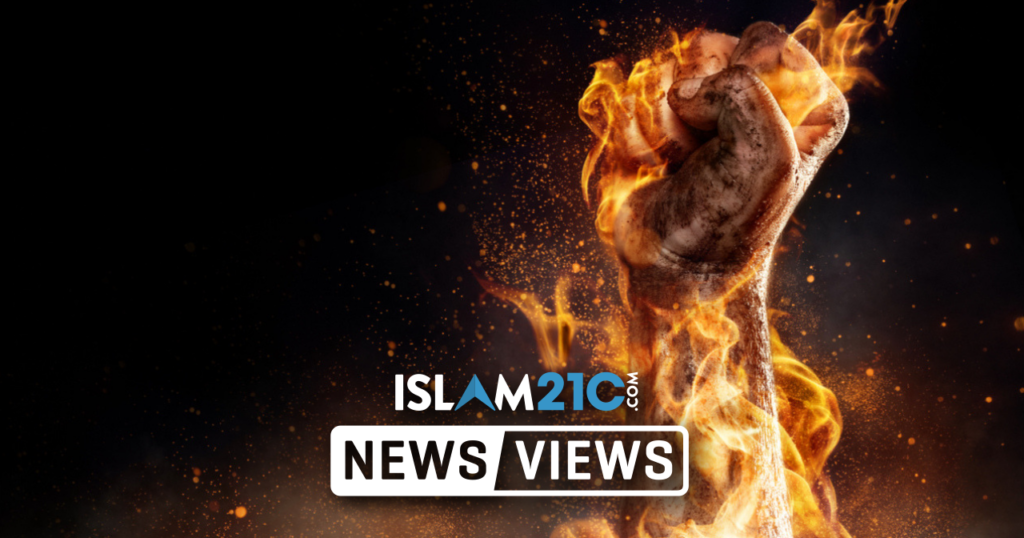 The Muslim teenage boy, Khalid, who had been set on fire for refusing to chant the Hindu slogan “Jai Shri Ram” – a slogan that praises a Hindu ‘deity’ – has died, India Today reports. [1]

According to multiple news outlets, the teenager had been admitted to Kashi’s Kabir Chaura hospital with 60% of his body covered in burns. He had stated, via a hospital camera, that he had been kidnapped by four men who had set him on fire for refusing to chant the Hindu slogan.

“I was walking on Dudhari bridge when four men kidnapped me. Two of them tied my hand and third one started pouring kerosene. After which they set me on fire and ran away.” [2]

However UP Police have argued that the case had seemed “suspicious”. Referring to the teenager as a “minor victim”, the police said that they had checked CCTV footage in the areas mentioned by the teenager but found that he had not been caught on camera in any of the areas mentioned. They also claimed to have found an “eye witness” who had seen Khalid set himself on fire. [3]

According to Chandauli’s Superintendent of Police, Santosh Kumar Singh:

“…He [the victim] had given different statements to different people, so it seemed suspicious. It seemed he had been tutored.” [3]

Khalid’s case is not the first to have been reported. Last month, footage emerged of a 22-year-old Muslim being “mercilessly beaten” and killed by a mob who had tied him to a tree and forced him to chant slogans praising two Hindu ‘deities’. [4] Other reports include Muslim youth and students being attacked, a Hindu ‘extremist’ mob chanting outside a mosque and threatening to attack it, and a 40-year-old Imām being rammed by a car, all in the name of the same Hindu ‘deity’. [5] [6] [7]

These cases make it evident that this Hindu slogan, which had traditionally been used as a Hindu greeting, is one that is now used to “intimidate” those who worship differently, with Muslims appearing to be a main target. With Modi’s landslide victory in achieving a second term as India’s prime minister, it appears that Hindu ‘extremist’ mobs have used it as motivation to continue their torturing ways.

Under Modi’s rule in the past, the country had seen a rise in ‘extremist’ killings of Muslims. In 2002, for example, he reportedly allowed Hindu mobs to “vent their anger” with anti-Muslim riots during his rule in Gujarat – riots that killed 1,000 people in the process. [8]

Furthermore, after Modi became prime minister in 2014, the country saw a rise in what has been referred to as “cow vigilantism”. This is a term that is given to the violent and hateful Hindu mobs who target and kill human beings in the name of the cow, in which they consider a deity. In 2018, the way in which the police handled 28-year-old Akbar Khan’s death highlighted how the country’s state and institutions had become “part of the mob”. [9]

More recently, BBC reported a 48-year-old Muslim food stall owner had been forced to eat pork by Hindus who had disagreed with the selling of beef curry. The stall owner, Mr Ali, labelled it as an “attack” on his faith. [10]

These incidents have led to Muslims in India living in fear under Modi’s second term. With a prime minister who seemingly gives way for the ‘extremist’ attacks of those who worship differently from the Hindu majority, and even rules a party that refuses to give amnesty to illegal Bangladeshi Muslims – despite promising amnesty for other religions – one could ask whether those fears are slowly becoming the reality.