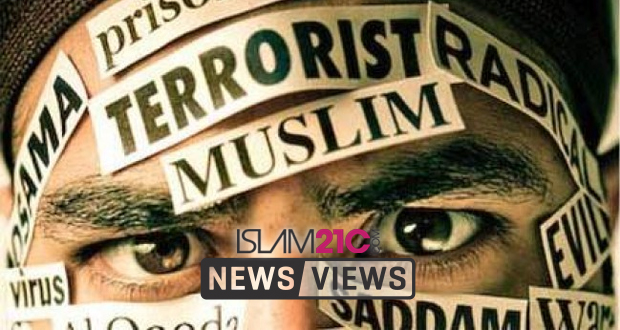 An academic study has shown that terror attacks committed by Muslims in the US receive nearly five times more media attention than those carried out by non-Muslims.

Researchers from Georgia State University published their work in a paper entitled, “Why Do Some Terrorist Attacks Receive More Media Attention Than Others?”[1], based on examining newspaper coverage of all “terrorist attacks” on US soil between 2011 and 2015.

They found that whilst Muslims committed only 12.4% of attacks during that period, those attacks accounted for 41.4% of the media coverage. When controlling for variables such as target type, fatalities and arrests, they calculated that attacks by Muslim perpetrators received 449% more coverage on average, than other attacks.

The study highlighted ample comparisons showing the disparity in reportage of so-called “terror attacks” carried out by Muslims as opposed to white non-Muslims.

The researchers cited the 2013 Boston Marathon bombing, for example, which was carried out by two Muslims and lead to the deaths of three people. It constituted 20% of all US terror attack coverage in the five year period.

However, the 2012 shooting at a Sikh temple in Wisconsin by a white supremacist soldier killing six people, constituted 3.8% of the reporting;[2] whilst the 2015 massacre at the African American church in Charleston, South Carolina comprised 7.4% of the reportage;[3] and the 2015 attack on a synagogue in Kansas only received 3.3% of the coverage in the period.[4]

Also read: How does the media fuel Islamophobia?

The authors remarked that the attacks mentioned meet the requirements of the definition of “terrorism” according to the Global Terrorism Database, “and thus should be reported on as such in media.” However it is well known that the structural racism within “mainstream” media corporations yields a different result in practise.

The academics also pointed out the particularly common, racist delusion that the media does not report or downplays so-called “terrorism” commit by ethnic minorities (particularly Muslims), as spread by US President Trump himself. They write,

“When President Trump asserted that the media does not cover some terrorist attacks enough, it turns out that he was correct… However, his assertion that attacks by Muslim perpetrators received less coverage is unsubstantiated.

“Whether the disproportionate coverage is a conscious decision on the part of journalists or not, this stereotyping reinforces cultural narratives about what and who should be feared.

“By covering terrorist attacks by Muslims dramatically more than other incidents, media frame this type of event as more prevalent. Based on these findings, it is no wonder that Americans are so fearful of radical Islamic terrorism. Reality shows, however, that these fears are misplaced.”