Are you ready for our first ever NATIONAL CAMPAIGN?
Home / Latest Posts / Muslims leaving mosque risk lives to rescue hundreds of people from tower block fire 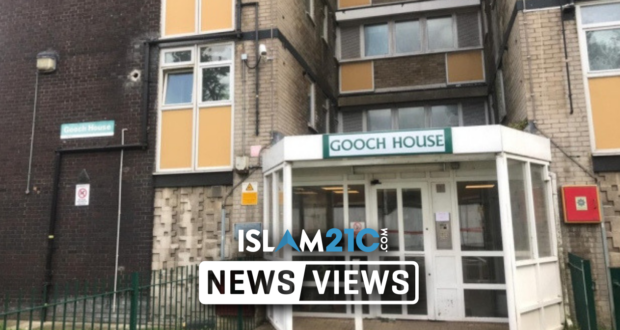 A fire broke out on the eighth floor of Gooch House in Kenninghall Road, Lower Clapton, at approximately 2.40 am on the 31st May 2019.

A group of worshippers attending Madina Mosque, which is a five-minute walk away from the block, saw the fire and proceeded to break into the estate and bang on all the doors from the flats on the 18th floor.

Their efforts ensured that the building was vacant and that everyone had escaped before the 25 firefighters arrived, taking control of the scene within an hour.

One of the locals, Ahmed, who has lived on the seventh floor for 15 years, said that they “banged” on the doors, shouting: “Fire, fire, get out”. [1]

“We were obviously a bit confused but I could smell it and hear the alarm going off in the upstairs flat.

They helped my mum downstairs while I took my wife and checked on an elderly resident on the first floor who is recovering from cancer.

They made sure everyone got out. They knocked on each door until someone opened. There was six or seven of them and they were only young. If it wasn’t for them we would never have got out.” [1]

He added that the worshippers were “fasting but spent an hour running up and down 18 floors”. [1]

“They broke their way in not knowing what was inside. It could have been a lot worse – they risked their lives.

It was a really important show of community spirit. It shows there are still people willing to help others and risk their own life.” [1]

It is believed that the fire started from a discarded cigarette. Though there were no serious injuries, one resident was treated for smoke inhalation.

Mosque chairman, Mohammed Sidat, commended the rescuers’ bravery, highlighting it showed a side of Islām people do not always hear about.

“They were very brave and ran right to the top floor. They didn’t think for their safety and were very courageous.

They did amazing and it’s because of Islām. This is the Islām people don’t read about. You sacrifice yourself for your neighbour.” [1]

Lea Bridge councillor, Ian Rathbone, was made aware of the fire in the early hours. He tweeted:

Well done to members of Madina Mosque! Lea Bridge Cllr Ian Rathbone: "I want to congratulate those mosque users who bravely went and tackled the situation. They have demonstrated what it really means to be a good neighbour" https://t.co/1FzwWuQ79i @HackneyLabour @PhilipGlanville

In addition, one resident wrote a letter of thanks to the Mosque that read:

“On behalf of the tenants of Gooch House, I would like to thank the young men of your congregation for alerting us of the fire that broke out on the eighth floor of the building.

Without thinking of danger to themselves, they went from top to bottom waking people.

Our thanks and blessings are with them all.” [1]

The happening takes place just two weeks before the second anniversary of the Grenfell Tower fire, a tragedy that occurred in Ramaḍān of 2017 and led to 72 deaths. [2] Then, many also praised the “Muslim boys” who were “coming from mosques” after tarāwīh to help those who were in the building. [3]

“Everyone was shaken up in light of Grenfell. There were people crying. I was watching people run down stairs with kids in both arms.” [1]

“Because of that We ordained for the Children of Israel that if anyone killed a person not in retaliation of murder, or (and) to spread mischief in the land – it would be as if he killed all mankind, and if anyone saved a life, it would be as if he saved the life of all mankind. And indeed, there came to them Our Messengers with clear proofs, evidences, and signs, even then after that many of them continued to exceed the limits.” [4]

One could only think that had the good-natured Muslims of Madina Mosque not been nearby, we would be reporting a different story right now, one foreshadowed by the tragic events of Grenfell almost two years ago.