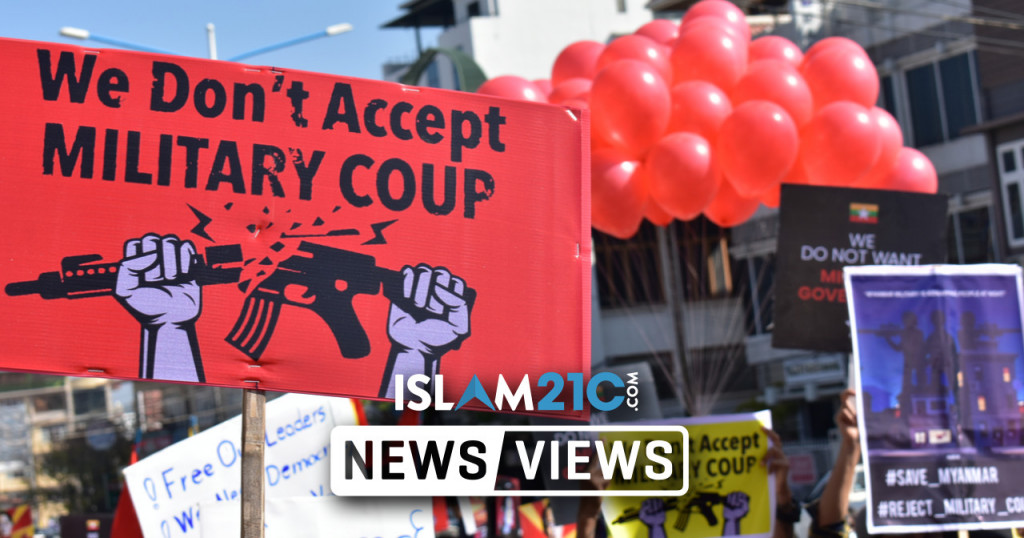 Myanmar’s ruling military junta once again faces censure for its use of excessive force, this time in light of reports which state that its forces torched an entire village. The army forces perpetrated this latest episode of violence after reportedly losing 15 soldiers during the pursuit of a man suspected of shooting a junta official in a neighbouring town. In the inferno, four elderly people reportedly died as a result of being unable to escape from their homes. [1]

In a formal statement, UK ambassador to Myanmar Dan Chugg condemned these reprehensible actions committed by the Tatmadaw:

“Reports that the junta has burned down an entire village in Magway, killing elderly residents, demonstrate once again that the military continues to commit terrible crimes and has no regard for the people of Myanmar.” [1]

The central Myanmar village of Kin Ma, which is situated in the Magway Region, reportedly had 200 of its homes burnt to ashes. All that remains in the village are strewn animal carcasses and a few standing trees. The Guardian has reported at least two deaths, while adding that more than 1,000 people have fled to surrounding forests and villages. Villagers have fled not only to shelter themselves from the lingering effects of the catastrophe, but to avoid further attacks from the military as well.

As has become the norm, the Myanmar junta has attempted to evade responsibility for the latest massacre. In its response, as transmitted by state broadcaster MRTV, the military claims that the burning of the village was actually perpetrated by unidentified “terrorists”. Furthermore, the military authorities stressed that any media organisation which makes any contrary claims is “deliberately plotting to discredit the military”. MRTV further claimed that 40 “terrorists” torched a house in the village of Kin Ma, which then snowballed into an enormous fire that engulfed hundreds of homes. [1]

The Myanmar military assumed power in the country after a February 2021 coup d’état, which caused de facto leader Aung San Suu Kyi to be removed from political office. The takeover was supposedly a result of the adamant army being unwilling to accept defeat in the nation’s November 2020 elections, where the ruling National League for Democracy party won 396 out of 476 parliamentary seats. For years, the army has been accused of launching similar attacks against Rohingya Muslim villages, which has led to the destruction of hundreds of villages and caused hundreds of thousands to flee to neighbouring Bangladesh. [2]

The Rohingya, who are a predominantly Muslim ethnic minority group hailing from Myanmar, have witnessed a torturous past and endured decades of relentless oppression. Since 1978, there have been countless occasions where Myanmar’s leaders have attempted to push greater numbers out of the country’s borders. Numerous so-called military “clearance operations” have seen successive pockets of Rohingya fleeing to Bangladesh, with “Operation Clean and Beautiful Nation” taking place in 1991-92. The latest round of violence against Muslims started in 2017, and still continue into the present. In addition to burning hundreds of villages, other crimes such as mass rape, forced labour, and murder have also been widely reported. [3]

The country’s political situation has destabilised as a result of the military violently suppressing civilian demonstrations. Protestors fiercely oppose the February coup and demand the restoration of the previous government. Surprisingly, it may be the case that for the first time, the general population is beginning to comprehend to some extent what the Rohingya people have suffered for decades.

It should be noted that while Burmese citizens are only recently experiencing subjugation at the hands of their own army, the Rohingya people have experienced far worse conditions by being subjected to violence at the hands of all sectors of society. For several years, the general population endorsed and supported the disgraced Aung San Suu Kyi, notwithstanding her inaction in the face of violence committed against the minority Muslim group. Shockingly, Suu Kyi did not even mention the Rohingya by name when delivering a defence statement to the International Court of Justice, after The Gambia initiated legal proceedings for state genocide against Myanmar in November 2019. [4] [5]

In her vague and unsatisfactory statement during the trial against Myanmar, Suu Kyi had said:

“The situation in Rakhine is complex and not easy to fathom. But one thing surely touches all of us equally: the sufferings of the many innocent people whose lives were torn apart as a consequence of the armed conflicts of 2016 and 2017, in particular those who have had to flee their homes and are now living in camps in Cox’s Bazar.” [4]

To date, fellow ASEAN member-states such as Vietnam, Thailand, and Laos continue to provide their backing to the Myanmar junta. On the other hand, nations such as Singapore, Malaysia, the Philippines, and Indonesia have expressed their desire to find a diplomatic solution for the internal strife. The present lack of unity amongst ASEAN nations means that a regional solution is beyond reach. Without any urgent intervention by regional and international actors, there is a growing risk that the situation will spiral out of control. Usman Hamid, the Director of Amnesty International Indonesia, presents the following chilling forecast: “If the situation continues to deteriorate, the conflict could escalate into a civil war, and Myanmar is at risk of becoming a failed state.” [6]