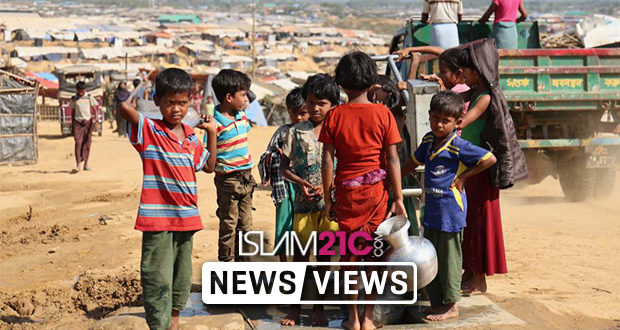 The Myanmar regime announced on Saturday that it has commenced repatriating Rohingya refugees from Bangladesh, starting with a single family of five.[1] Images were released showing the family receiving ID cards with the Myanmar flag behind them, and undergoing medical checks. There has been no independent verification of the announcement however, with some claiming it was staged in a failed attempt to try to convince other refugees to return.[2] Bangladesh itself has stated that it was not involved,[3] adding further weight to claims that it was simply a publicity stunt.

A spokesperson from the International Federation for Human Rights, Andrea Giorgetta, criticised the announcement, describing it as:

“A public relations exercise in an attempt to deflect attention from the need for accountability for crimes committed in Rakhine state.”[4]

Only a day earlier the UNHCR expressed their concern over any repatriation deal, saying it “considers that conditions in Myanmar are not yet conducive for returns to be safe, dignified, and sustainable. The responsibility for creating such conditions remains with the Myanmar authorities.”[5]

Whether the announcement was staged or not, the regime still shamelessly underlined their position by providing ID cards that referred to the family as Muslim migrants rather than citizens, effectively rendering them stateless, despite the Rohingya’s presence in their homeland for centuries.[6]

Some 700,000 Rohingya have fled to Bangladesh following the military’s campaign against them, described by the UN and several states as “ethnic cleansing”, which included horrific cases of rape, indiscriminate killings, and burning down of entire villages. They are often described as the “most persecuted minority on Earth”.[7]

Indeed, they continue to flee genocide; the most recent boat departed just last Thursday,[8] heading to Cox’s Bazar in Bangladesh, where they will face harrowing and desperate conditions that are still safer than remaining in their homes.[9]

A day after Myanmar announced the repatriation, UN secretary general Antonio Guterres released a new report on the situation, saying of the sexual assaults carried out:

“The widespread threat and use of sexual violence was integral to this strategy [of ethnic cleansing], serving to humiliate, terrorise and collectively punish the Rohingya community, as a calculated tool to force them to flee their homelands and prevent their return.”[10]

The report is set to be discussed by the UN Security Council this week.

In recent weeks, there have been various other reports of the regime seeking to clear the Rakhine state and alter demographics; Buddhist citizens have been re-settled in Rohingya,[11] mirroring what has long occurred in Palestinian lands. Mosques which survived village burnings have since been destroyed and replaced by military and police bases. Amnesty International’s crisis response director was quoted saying:

“What we are seeing in Rakhine State is a land grab by the military on a dramatic scale. New bases are being erected to house the very same security forces that have committed crimes against humanity against Rohingya.”[12]

2018-04-15
Abdullah Izzadin
Previous: World in Frenzy Over ~13,000th US Airstrike in Syria
Next: How the Prophet ﷺ made leaders out of broken people