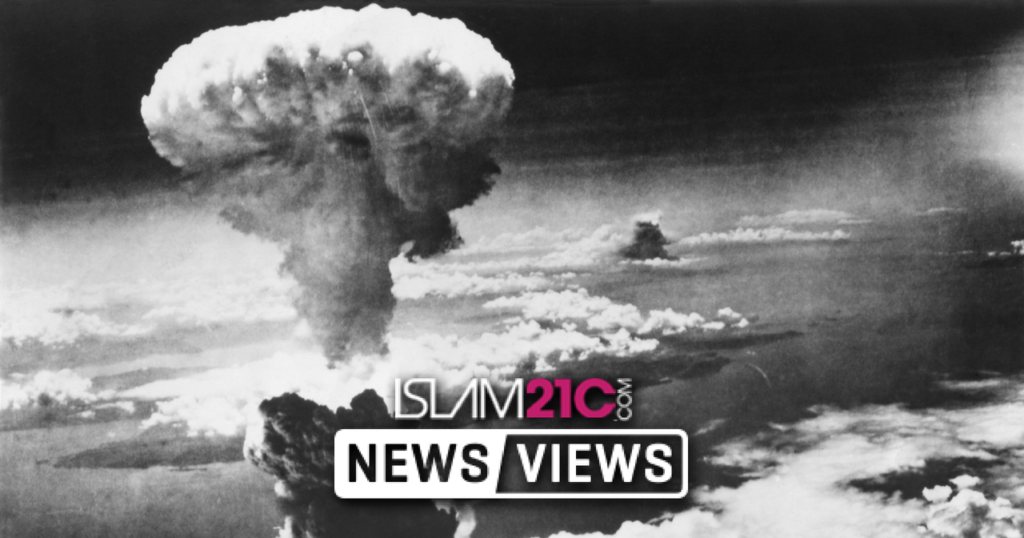 On Thursday, Nagasaki marked the anniversary of the world’s second atomic bombing. It was 73 years ago that nuclear weapons were dropped on the Japanese city by the US in which 80,000 people were massacred. Only days earlier, in Hiroshima, 146,000 people had been killed during the first ever atomic strike in human history.

Over a quarter of a million men, women and children were incinerated by the US. According to documents declassified by the US National Archives and Records Administration, the UK was complicit in the attack.[1]

According to The Japan Times, the UK officially expressed its support for the use of the weapon against Japan in Washington on 4 July 1945 – one month before they were used.[2]

In the early hours of the morning a US B-29 bomber dropped a uranium atom bomb which exploded 580 metres above the city. No doubt the resulting flash, which created a fireball that burned like a volcanic eruption in the sky with its infamous mushroom clouds and with a temperature of more than a million degrees Celsius at the core, must have paralysed the innocent people unfortunate enough to have been witness to it.

The bomb also created a surface temperature of 4,000C. Ferocious heat waves and radiation erupted in every direction, unleashing a high-pressure shockwave that tore apart tens of thousands of people. In an instant a city nearly half a millennium old was lost.

A US B-29 bomber dropped the 20 – Kiloton atomic bomb “Little boy” which decimated Hiroshima and the 2nd 21 – Kiloton atomic bomb called “Fat boy” which was dropped on Nagasaki. The casualties in Nagasaki would have been higher had the bomb not missed its intended target due to cloud cover.[3] A further 200,000 people were irradiated and either died of or suffered from related diseases for the rest of their lives.[4]

There is a popular justification that the atomic bombs stopped the war and the death of one million American soldiers. However, Kevin Kamp’s Radioactive Waste Specialist at the organization Beyond Nuclear, commented:

“And the myth became that a million American lives were saved by dropping the bombs. That was not true. The truth is, the bombs were dropped to send a message to the Soviet Union where to get off. Billions of dollars in 1945 money had been spent on that [atomic] project, and the bombs were dropped to fulfil an experiment as well, to show some return on the so-called investment.[5]”

Another common myth is that the bombs ended World War II, however Kamp said:

“But no, it was the threat of a Soviet military invasion that ended World War II. The Japanese had been firebombed by the Americans for months already, and that lends a lot more to the theory that these atomic bombings were tests, because they [the Americans] were saving some cities to use these bombs against, and they wanted to see full on what the effects were.”

The effects were clearly catastrophic enough that, to date, an atomic bomb has not been deployed by any other nation.

A week after the atomic immolation, Japan surrendered, following which the US occupied it for approximately 7 years. Under US General MacArthur’s guidance, the Japanese constitution was rewritten on 3rd May 1947 with a key determination about Japan’s military future:

“Japanese people forever renounce war as a sovereign right of the nation and the threat or use of force as a means of settling international disputes.”[6]

Some may argue this policy of the occupier dictating pacifism to the occupied has been repeated by the US on numerous occasions since, not least in Afghanistan and Iraq.

Today Hiroshima is flourishing despite the tragedy that occurred there. It is a testament to the resilience of the Japanese people and an example of what can be achieved after the devastation of war.