Nationalists call for “White Europe” and “Islamic Holocaust” in 60,000-strong march in Poland 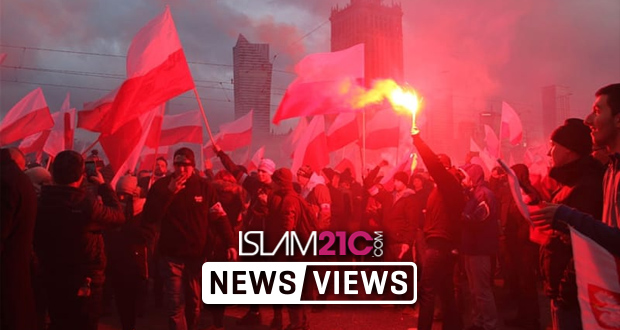 An annual rally of white nationalists reportedly saw 60,000 demonstrators march through Warsaw brandishing Nazi and white supremacist signs, calling for an “Islamic Holocaust” over the weekend.

The gathering began in 2009 with only a few hundred people, intended to be a substitute march for Poland’s official independence day commemorations. It is now reportedly the largest independence day event in the country and one of the largest nationalist marches in the entire continent.

The rally was composed of several neo-Nazi and other far-right groups from various countries who gathered in the capital, including the infamous EDL-founder Tommy Robinson from the UK.[1] Demonstrators calling for a “Jew-free” country, reportedly threw red smoke bombs, lit red flares and held banners with phrases like “Europe Will Be White”, “Clean Blood” and “Pray for an Islamic Holocaust”.

The fact that Tommy Robinson (like other anti-Muslim campaigners who regularly champion Israeli interests and Zionist ideology)[2] also appeared in and praised a march organised by Islamophobes and anti-Semites (with signs calling for a “Jew free” country[3]) is not surprising. It is a common trend amongst Israeli lobbies to tolerate or even support anti-Semites insofar as it benefits Zionism or Israeli power,[4] highlighting the great gulf between Zionism and Judaism.

A counter protest also went ahead containing approximately 2,000 anti-fascism demonstrators separated by police. There are reports that the nationalists pushed and kicked a group of women holding a “Stop Fascism” banner,[5] and that the police arrested 50 members of a “pro-democracy” group that staged the counter protest.

State media—which the Washington Post described as “a mouthpiece” for the “populist nationalist ruling party”—covered the march extensively and positively, with no senior government politicians clearly condemning the slogans or organisers as of yesterday.[6]

Creating a monster they cannot control

Many mono-ethnic countries in Europe have long used Muslims as a placeholder for the “Other”, an amorphous group upon which people’s own insecurities and fears can been placed or exploited by power, dating back to the Crusades. As such, the immigrant—particularly “the infidel” Muslim—has been an easy scapegoat for power to distract the disenfranchised away from the real reasons for their misery.

Poland is said to have one of the fastest growing far-right movements in Europe which uses the influx of refugees fleeing wars to drum up support among the increasingly paranoid Islamophobes, painting them as a “conspiracy between Jewish financiers and Communists to destroy the European Union with Islam, Sharia law and homosexuality.”[7]