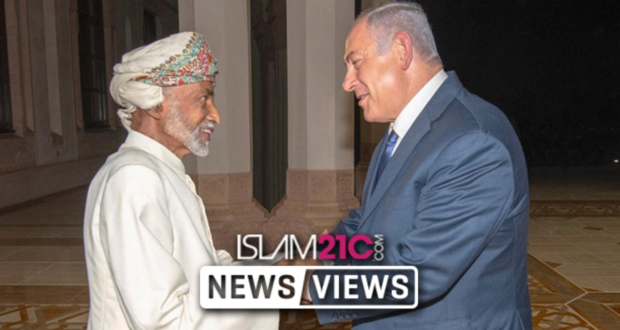 Netanyahu in Oman hails a new era of Arab Zionism

Just two days after Israeli Prime Minister Benjamin Netanyahu paid a secret visit to the Gulf Sultanate of Oman to a warm royal welcome, Israeli fighter jets were again pounding the Gaza Strip. Many saw that the Sultanate’s alleged quest for “peace and stability in the Middle East”,[1] if not relevance, could not have been more undermined. But questions remain as to whether its silence towards the crimes of its Zionist ‘enemy’, turned newfound friend is closer to endorsement in an Arabian Gulf that is proclaiming its real allegiances to ‘Israel’ like never before.

On Sunday 28th of October, three Palestinian boys were decimated by a targeted Israeli airstrike in South-Eastern Gaza. The Israeli army rushed to claim that the boys were “involved in placing an improvised explosive device” near the security fence.[2] The families of the boys denied that they were linked to any ‘militant’ group, with the mother of 14-year-old Abdul Hameed stating he had “nothing to do with the resistance.”[3]

Despite the Israeli narrative initially asserting that they were “terrorists”, they continued to legitimise the killing by claiming they were behaving in a suspicious manner.[4] The three boys whose ages ranged between twelve and fourteen were identified as Khaled Bassam Mahmoud Abu Saeed, Abdul Hameed Mohammed Abdul Aziz Abu Zaher and Mohammed Ibrahim Al Sutari.[5]

The right-wing Islamophobe who described the Muslim call to prayer as the “barking dogs of Muhammad”,[7] and who wore a picture of the Dome of the Rock during a film festival attended the Judo Grand competition in Abu Dhabi.[8] The minister was also given an honorary tour of the third largest Mosque in the world, the Sheikh Zayed Grand Mosque in Abu Dhabi.

Regev later tweeted “we made history. The people of Israel live!”[9] The once unthinkable relationship, according to detractors, demonstrates the extent to which the Gulf nations are selling themselves to the Zionist regime and are becoming complicit partners of the occupation of Palestine, stimulated by the post-Trump new-era of Arab Zionism.

After Oman and other Gulf states, it is likely that Netanyahu will visit another Gulf nation in the future and one’s imagination does not need to run wild to guess which one.[10] The gradual normalisation of relations between Israel and the Arab world cements feelings in Palestine that their plight is being brushed under the carpet and that the reality is that their struggle against injustice will be carried out alone.

Coronavirus: Islam’s holiest mosques reopen after being closed for more than two months