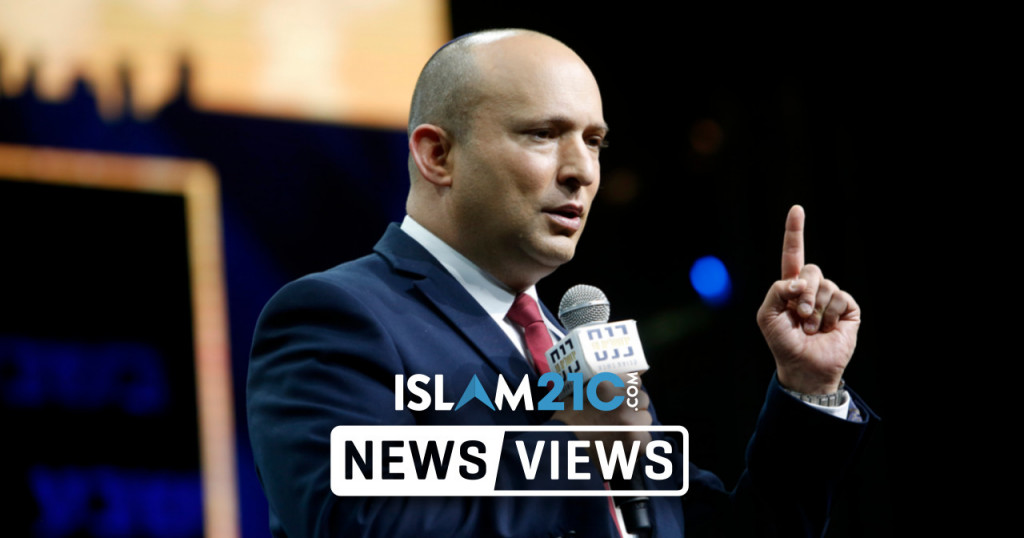 Benjamin Netanyahu, the longest serving leader of the so-called state of ‘Israel’, has been ousted from office after twelve consecutive years of rule. Netanyahu’s dramatic exit occurred after a diverse group of opposition parties agreed to cooperate with one another and form a coalition government. [1]

Right-winger Naftali Bennett, the man sworn in as the next Prime Minister of ‘Israel’, will likely take an even more draconian route than his predecessor. Bennett is even alleged to have said the following chilling remarks:

In a Knesset vote conducted on Sunday 13th June, members of the house voted 60-59 in favour of creating the new anti-Netanyahu coalition government, which consists of an unprecedented eight parties from across the Israeli political spectrum. They include the centrist political party Yesh Atid, led by former finance minister Yair Lapid; the liberal Blue and White party led by former minister of defence, Benny Gantz; and the right-wing political alliance, Yamina, which is led by Naftali Bennett. Also included in the coalition is the centre-left Labor party, led by Merav Michaeli; the centre-right Yisrael Beiteinu, headed by Avigdor Lieberman; New Hope, a liberal party with Gideon Sa’ar at the helm; Meretz, which is a left-wing party led by Nitzan Horowitz; and the anti-Zionist United Arab List or Ra’am, led by Mansour Abbas.

Under the new government’s rotation agreement, it has been arranged that Naftali Bennett will serve as Prime Minister until September of 2023, and thereafter will transfer power to the chief of Yesh Atid, Yair Lapid. Lapid will then lead the Israeli government until November of 2025, when the next round of elections are expected to take place. [3]

The diverse nature of the coalition agreement leaves no room for stability, since the new government’s foundation rests on an extremely fragile political alliance. It also goes without saying that the whole coalition was originally pursued for the sole purpose of removing Netanyahu from the office of Prime Minister.

“I’ve killed lots of Arabs in my life, and there’s no problem with that.” – Naftali Bennett

The next PM of Israel even more openly racist than Netanyahu which you would think is impossible. More unashamed aggression likely to come. pic.twitter.com/N8q4RWGNnp

And all you’re likely to hear from Biden and American politicians are statements of concern while the Palestinians are told to shut up and take it while waiting for this two state solution Israeli leaders in their own words say will never happen.

Netanyahu’s first spell in power was during a stint from 1996 to 1999. He then subsequently won several electoral pluralities between 2009 and 2021. Being once dubbed as “Mr Security”, his ironclad grip over the Israeli government has gradually waned in recent years, especially after being engulfed in a myriad of criminal proceedings concerning allegations of bribery, breach of trust, and fraud. In a court case referred to as Case 1000, breach of trust and fraud charges were laid against the former leader, in relation to presents received from Hollywood producer Arnon Milchan, as well as billionaire Australian James Packer. [4]

Furthermore, in another similarly named case – Case 2000 – Netanyahu was charged with allegedly arranging a quid pro quo agreement with the Yediot Aharanot newspaper’s publisher, Arnon Mozes. Netanyahu is accused of allegedly agreeing to consider passing a bill that would have made it harder for Israel Hayom, a rival paper, to gain in popularity. [4]

The above two cases are not the only criminal charges filed against Netanyahu during his time in office. For instance, Case 3000 is a lawsuit that not only concerns Netanyahu, but also his wife, Sara. In this episode, the couple have been accused of accepting political favours and services from telecoms magnate Shaul Elovitch, in exchange for Netanyahu giving Elovitch carte blanche to expand his business interests. [4]

In recent times, the Israeli political landscape has been rocky, with four general elections taking place in the past two years. There has been no conclusive winner from any of these prior votes, and the 60-59 Knesset confirmation vote for the formation of a new government does not change much in the grand scheme of things. This is because passing legislation with a single-member majority is almost impossible in a normal set of circumstances. However, these are by no means conventional times. This is so if one considers the fact that the coalition government is made up of eight widely divergent political parties, each with its own unique interests. This implies that it will be relatively more difficult to pass legislation and reach agreements on policies and bills.

One might argue that Sunday’s Knesset vote is similar to that of the US after the Western nation elected Joe Biden to the office of President following four bitter years of Donald Trump’s leadership. Indeed, in one of his statements, Naftali Bennett stated that owing to several rounds of undecided elections, the nation had been hurled “into a maelstrom of hatred and in-fighting”. Bennett, a tech millionaire, pledged that the new government would “represent all of Israel”. [5]

Bennett believes that in order to stop the constant run to the polls, political unity is imperative:

“The time has come for different leaders, from all parts of the population, to stop, to stop this madness.” [5]

Reactions within ‘Israel’ have been mixed, with some supporters of Netanyahu decrying the Knesset vote as a win for those who wish to see a Palestinian state. Opponents of the previous government, such as one protester by the name of Ofir Robinski, have a very different viewpoint to share:

“For us, this is a big night and tomorrow will be even a bigger day. I am almost crying. We fought peacefully for this [the departure of Netanyahu] and the day has come.” [5]

On the Palestinian front, both the PLO and Hamas have issued similar statements in response to the change.

“This is an internal Israeli affair. Our position has always been clear, what we want is a Palestinian state on the 1967 borders with Jerusalem as its capital.” [5]

Moreover, a representative of Hamas reiterated that the oppressive political character of the Israeli state will not change with the latest leadership shuffle:

“It is an occupation and a colonial entity, which we should resist by force to get our rights back.” [5]