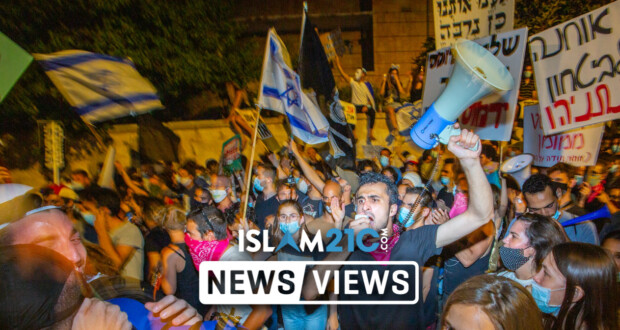 Nightmare for PM Netanyahu as thousands protest near his residence

Thousands of Israelis protested in Jerusalem against the spread of COVID-19, condemning the Israeli government in their dealing with the crisis and the consequences that have resulted due to a lack of competency shown by the Israeli authorities.

Protestors filled the streets near the official residence of Prime Minister Benjamin Netanyahu in a show of unity and strength as weeks of protests recently intensified. In May, ‘Israel’ lifted a partial lockdown that caused a second wave of record levels of COVID-19, causing the Prime Minister’s approval ratings to plunge below 30%. The country is now dealing with rising unemployment, which has surged to over 20%.

— Read Parable of the Sower by Octavia Butler (@JoshuaPotash) August 8, 2020

Thousands of these protestors have called on the Prime Minster to officially resign based on his handling of the COVID-19 crisis, as well as him being on trial for corruption charges. Protestors argue that Netanyahu is simply not fit to remain in office. Many protestors held Israeli flags and chanted slogans against the Prime Minister, such as ‘Crime Minister’ and ‘out of touch.’

A large banner was projected onto a nearby building which read ‘Balfour is in our hands.’ The demonstrators have accused Netanyahu of corruption and the failure of his coalition government to recognise and respond to the suffering of its citizens.

Netanyahu’s Likud party announced that the weekly Cabinet meeting had been called off due to disagreements with the chief coalition partner from their rival, the Blue and White party. The two parties have been disputing over the country’s national budget. If they are unable to reach a decision by late this month, ‘Israel’ will have an early election.

Israeli media have estimated that there were around 15,000 people at the demonstration. An additional 1,000 people also protested near Netanyahu’s beach home in Caesarea, sending the Prime Minister a clear message that they will not continue to suffer silently. The protests that have taken place against Netanyahu have been the largest ever since protests in 2011 against the country’s high cost of living.

Netanyahu has blamed the Israeli media for encouraging dissent. The Likud party on Saturday called the protestors ‘left-wing rioters’ and accused the popular Channel 12 of ‘doing everything it can to encourage the far-left demonstrations.’ Netanyahu’s son, Yair, also commented on the situation by calling protestors ‘aliens’, causing a public uproar.