No, Trump did not give a speech on Islam to Muslims 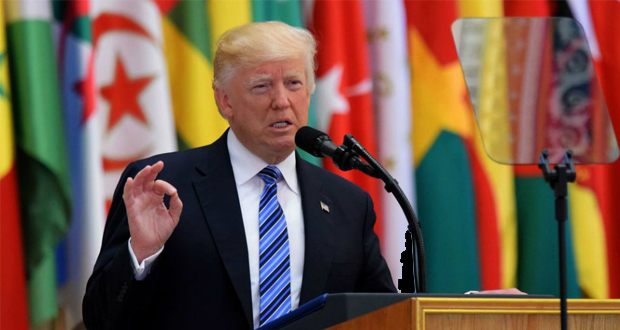 The attempt of the mainstream media to incite feelings of subjugation among Muslims by purportedly portraying Donald Trump as some kind of ‘Lecturer on Islam’ caused a mixed reaction among Muslims and non-Muslims alike. [1] Making this speech of the US President Donald J Trump at the Arab-Islamic-US summit a much-anticipated one, his speech was uncharacteristically measured, for the most part at least, unlike his usual self. Was this due to suffering a political blow from his country’s senate? With members of his own Republican Party arguing over his ‘mental state’ before he fled for his first foreign visit?[2] Or was this a typical businessman-like move as he surveyed everyone in the room as a potential source of billions of dollars in income for a free-falling US economy that can hardly cater for the basic health care necessities of its citizens?

This speech was not without its controversies and it was arguably self-contradictory. “Drive them out of your places of worship” said Trump in an implicit statement to denote that terrorists may be in Masājid, echoing the Islamophobic remarks of the populist Islamophobes. In an earlier remark during the speech, he underlined that “Terrorists do not worship god, they worship death”. [3] So, one might ask, how could you find terrorists in Masājid?

These remarks did not go unchallenged, however. King Abdullah II of Jordan went on to assert;

“Terrorist groups employ a false religious identity. Their aim is to mislead and polarise our societies and peoples. Let us state here, clearly: Terrorist groups do not inhabit the fringes of Islām they are altogether outside of Islām; they are khawarej, outlaws of Islām.” He further stated, “Intolerance and ignorance will only aid terror groups. It is vital to help everyone, everywhere, understand this.”[4]

Though it may have been unclear whom he referred to as terrorists and Khawarij, the discussion in this summit was centred around the presence of Daesh and Iranian-backed militias in the region. In the opening address of the summit, King Salman of the Kingdom of Saudi Arabia said “the Iranian regime has been the spearhead of global terrorism since the Khomeini revolution until now”, he also asserted the “respect and appreciation [held] for the Iranian people, we do not hold people responsible for the actions of their regime”. [5]

Considering this, let us not give credibility to a well-known Islamophobe by referring to this speech as a “speech on Islām”. It was a summit where leaders of many countries attended and delivered their respective speeches.

Who are the ‘terrorists’?

“Extremism” does NOT cause terrorism

This mixed with the fact that the vacuous term “extremist” is applied routinely to Muslim activists all over the globe due to a neoconservative agenda exported from the US itself, it is little wonder that very few if any mainstream Muslims will lend their support to such initiatives to “fight extremism”.