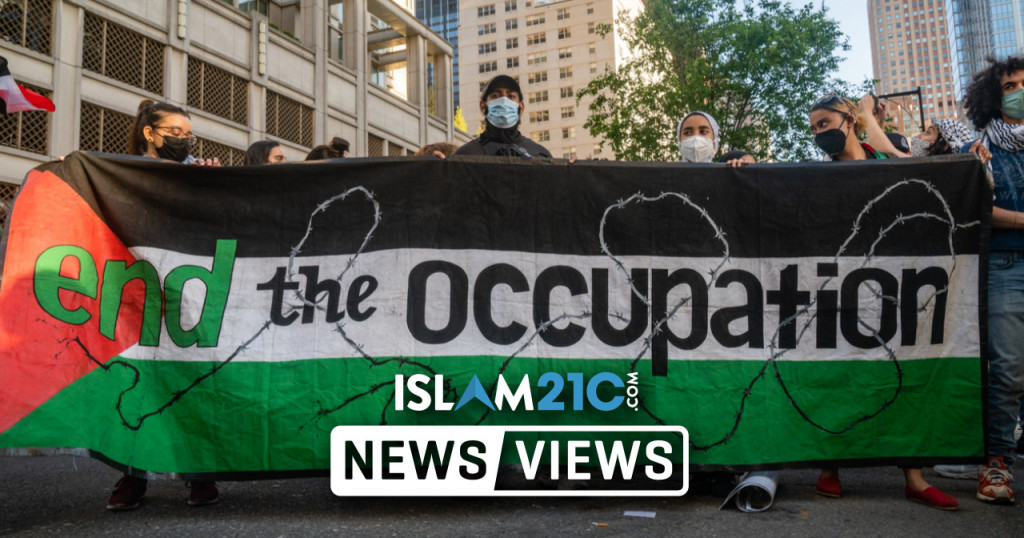 Israeli occupation forces brutally targeted hundreds of Palestinians in the West Bank on Friday, in the latest round of violence rocking the region. Demonstrations continue to be held against Israeli settlers who have encroached upon Palestinian land, and are setting up caravans in areas such as the small northern village of Beita. [1]

The large number of casualties has been attributed to Israeli troops heavy-handedly using tear gas to disperse local residents, who have been holding regular weekly demonstrations against illegal Israeli settlers. The Red Crescent has said the majority of those injured required treatment due to inhalation of a lachrymator agent. Furthermore, a number of Palestinians were also wounded by live fire and rubber bullets.

Beita, a village near Nablus, is home to five Palestinian clans, which when put together make up thirty families. The area had a population of just under 10,000 in 2007. The village has become a flashpoint for demonstrations this year, as illegal Israeli settlers have built an outpost on the town’s Mount Sabih. In addition, they have established more than 20 caravans on top of the mound, putting the livelihoods of at least 17 families at risk. The area has seen weekly protests as a result. In response, occupation forces in June cut off its main entrance with cement blocks, which were transferred with large trucks and a military crane. [2]

Concerning Friday’s events, the Zionist military informed AFP that it had acted “with riot dispersal means” in order to quell protesters. However, it remains morally defenceless when considering the fact that it actually has no legal right to be present in Beita, as well as other villages in the West Bank. Indeed, the vast majority of states in the international community deem Israeli settlements in the West Bank to be illegal. [3]

However, there has been a lack of collective action against the apartheid state in international circles. In October 2020, the UN Special Rapporteur on Palestinian Territories Michael Lynk expressed his frustrations regarding this matter with the following statement:

“Israeli settlements continue to devour the land that is meant for the independent Palestinian State, the international community observes, it sometimes objects, but it does not act.” [3]

In addition to the recent round of Israeli aggression against Palestinians in their homeland, earlier this week there was the doubly tragic case of the 20-year-old Shawkat Khalid Awad. The tragedy was indeed double in the sense that Awad had been shot in the head and stomach by Zionist forces. This occurred whilst he attended the funeral of a 12-year-old Palestinian boy, who was killed by Israeli soldiers on July 28. [4]

Clashes erupted with the Israeli occupation forces following the funeral of the Palestinian child martyr, Mohammed Allami (12) who was shot dead by the IOF yesterday in #Hebron city.#FreePalestine pic.twitter.com/o5RMq0jAlZ

The Israeli military has said that it is investigating the death of 12-year-old Mohammed al-Alami, who was killed as soldiers fired at a vehicle they apparently suspected was involved in “suspicious activity”.

Mohammed was sitting in the car w/ his sister, his father at the wheel, coming back from the shops when Israeli soldiers fired at vehicle

There is no calm when under a military occupation pic.twitter.com/7XP0ZFnXcD

With the newly installed Israeli Prime Minister Naftali Bennett, the general direction of Israeli-Palestinian relations appears to be worsening. Amongst Arab states, Palestine is growing more isolated by the day.

Indeed, in a symbolic moment, the first of two direct flights between ‘Israel’ and Morocco took place last Sunday, with carriers El Al and Israir flying from Tel Aviv to Marrakesh. Israeli leaders have been ramping up the pace, with so-called ‘normalisation’ agreements being signed left, right, and centre. Several Arab states, which include Sudan, the UAE, and Bahrain have fully normalised their relations with the country, after former US President Donald Trump lent his backing to such deals. [5] [6]

Even with the incumbent Joe Biden now as US President, much of the status quo remains unchanged. This is to the extent that the thorny issue of the location of the US Embassy in ‘Israel’ has been laid to rest. The base of America’s diplomatic mission in ‘Israel’ is firmly set to stay put in the highly contentious city of Jerusalem. In February 2021, a White House spokesman confirmed to the Capitol Hill newspaper Roll Call the following:

“The U.S. position is that our embassy will remain in Jerusalem, which we recognize as Israel’s capital…The ultimate status of Jerusalem is a final status issue which will need to be resolved by the parties in the context of direct negotiations.” [7]

The Embassy was relocated to Jerusalem in 2018 after Donald Trump implemented a 1995 law that required the US to move its embassy to the Old City. However, prior to Trump’s single term in office, a series of presidents including Bill Clinton, Bush Jr, and Barack Obama had signed waivers deferring such action from taking place. [8]