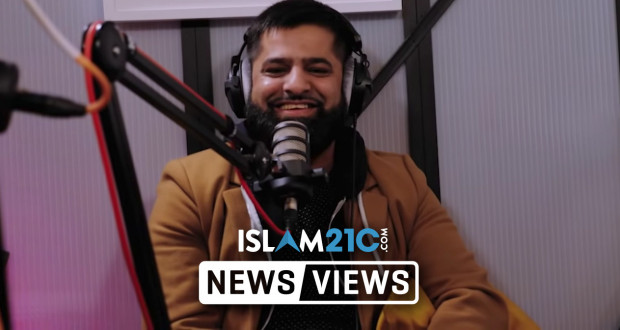 The British-Pakistani nashīd artist Omar Esa has seen his latest album, Allah and His Beloved, rapidly ascend the UK iTunes chart. In only four days since its release on Friday 9th April, the 15-song album has skyrocketed from entering the top 10 the day after its release, rising to sixth spot yesterday, and taking over fourth spot at the time of this article’s publication. [1] [2]

The inspirational achievement has been welcomed by a number of Muslim organisations and collectives, including the UK-based Friends of al-Aqsa campaign group, IlmFeed, and 5Pillars, coming on the eve of the commencement of Ramaḍān 2021. [3] [4] [5] [6]

The continuing success of Esa’s newest album comes less than four years after he made global headlines by reaching the No. 1 spot in the iTunes worldwide chart with his album My Muslim Family. [7]

Omar Esa, a former R&B singer who disowned harām music earlier on in his artistic career, has become a household name in the world of nashīds. In addition, Esa has tried his hand at acting, as well as writing a drama called Life and Dunya, which focuses on the topics of drugs and criminality. [8]

At the time that the humanitarian aid worker Tauqir “Tox” Sharif was detained in Syria, [9] Esa was one of the rare breed of Muslim celebrities who defended him. Human rights lawyer Fahad Ansari said:

“[Omar Esa] was one of the few people publicly speaking out for him, despite knowing he had a lot to lose by taking the stance he did. He is now seeing the barakah of that courage. May Allah give him even more success.” [10]

Esa’s accomplishment in being one of the few around the globe to forge a counter-genre of high quality nashīds purely with vocals and no instruments has led him to gain popularity in spreading positive messages to many. This highlights the fact that da’wah is a dynamic and evolving reality with varying types of talent and focus required; not a one-size-fits-all approach.

With the continued rise to the top of the UK’s iTunes leaderboard, Esa proves the point that there is goodness in all avenues, provided that one makes the best of intentions and sticks to one’s principles to have the ultimate aim of pleasing Allāh.

Chief Editor of Islam21c, Salman Butt, remarked at the news:

“There are many artists that feel they have to tread the “mainstream” path that may involve a culture filled with prohibited and harmful practices; but a true artist forges his or her own medium on their own terms. Successes like these give a good glimpse into a future where more and more Muslims can become too loud to ignore whilst sticking to their own values and principles, instead of having to fit into someone else’s ethics.”

The album, ‘Allah and His Beloved’ can be purchased here