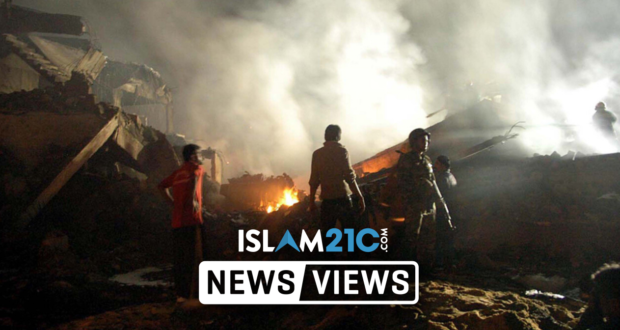 A Pakistani passenger plane carrying around 100 passengers and seven crew members has crashed in a residential area in Karachi. At least two people have reportedly survived the Pakistan International Airlines (PIA) plane crash.[1]

Flight PK8303 was on a domestic journey from Lahore and only minutes away from Jinnah International Airport. May Allāh (subḥānahu wa taʿālā) accept those that have returned to him as martyrs, āmīn.

There are fears of mass casualties after the plane landed in a populated residential area in the Model Colony neighbourhood, disappearing from radar on its final approach to the airport in Karachi. There have also been reports of multiple casualties on the ground, as at least five houses caught fire.[2]

The Bank of Punjab president, Zafar Masud, who is “out of danger” in hospital, and another passenger, Mohammed Zubair, are said to have survived the tragic incident, according to local officials.

A third passenger, Khalid Sherdil, a chief executive of an urban planning unit, is reportedly alive and in an intensive care unit, according to those close to his family.

“Saying anything right now would be premature”

“Our crew is trained to handle emergency landings. All my prayers are with the families. We will continue to provide information in a transparent manner.”

Before the plane crashed, the pilot is said to have called in and described a technical fault just minutes before the tragic incident.

A pilot can be heard saying:

“We are proceeding direct, sir – we have lost engine”

“Confirm your attempt on belly” the air traffic controller said, offering a runway.

Before the transmission ended, the pilot then said:

“The entire area has been sealed off by the army as they have stepped in for the rescue mission…They are not allowing anyone to go near the site and there is complete panic here.”

Imran Ismail, the Sindh governor, said: “The concern now is of casualties of people in the area. Rangers and rescue services have been sent. We are trying to save as many lives as possible.”

The prime minister, Imran Khan, tweeted: “Shocked and saddened by the PIA crash. Immediate inquiry will be instituted. Prayers and condolences go to families of the deceased.”[3]

Shocked & saddened by the PIA crash. Am in touch with PIA CEO Arshad Malik, who has left for Karachi & with the rescue & relief teams on ground as this is the priority right now. Immediate inquiry will be instituted. Prayers & condolences go to families of the deceased.

May Allāh (subḥānahu wa taʿālā) grant patience and strength to all of their families. May Allāh have mercy on them, forgive them, and elevate their ranks in jannah, āmīn. We also ask Allāh (subḥānahu wa taʿālā) to make this difficult time an expiation of sins and to raise their ranks in the sight of our Lord.