Are you ready for our first ever NATIONAL CAMPAIGN?
Home / News / Pakistan protests: Calls for PM Imran Khan to resign 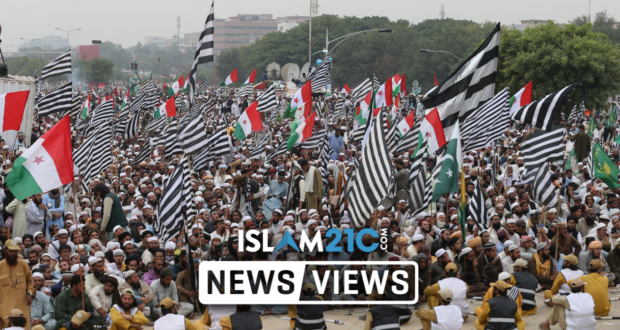 Opposition leaders in Pakistan have continued to demand for the resignation of Prime Minister Imran Khan as thousands of people gather in mass anti-government protests.

The protestors that gathered in the capital Islamabad from all over the country labelled Khan’s government illegitimate and incompetent and intend to force the cricketer-turned-Prime Minister out of office less than 18 months into the job.

On Friday, the leader of the Jamiat Ulema Islam-Fazl (JUI-F) party, Maulana Fazl-ur-Rehman, addressed supporters as part of the second day of mass protests in Islamabad. The leader declared that a sit-in would continue for two further days.

Why are people protesting?

On Friday, Pakistan’s opposition gave Imran Khan just 48 hours to step down. The protests are spearheaded by his long-term rival Fazl-ur-Rehman. The calls to step down are being supported by several other major opposition leaders and parties.

The PM has been accused of cheating in his 2018 election victory. Fazl-ur-Rehman told supporters: “They have not come to power on the public’s mandate but on someone else’s direction … They won’t work for the public, rather they will only please their selectors.”

In an indirect reference to the country’s military, Fazl-ur-Rehman said that the “gathering is making it clear to the whole world that only the people have the right to rule Pakistan, and no institution has any right to reign over Pakistan.”

Pakistan’s military has ruled the country for about half of the nation’s 72-year history. The military is accused by the opposition of getting Khan into power and supporting his Pakistan Tehreek-e-Insaf (PTI) party.

An EU observer mission on Pakistan’s election in 2018 said it found no evidence of vote rigging, although it noted a “lack of equality of opportunity” for each party in the run-up to the election.

Demonstrators are also furious with Imran Khan’s promises of progress, and the country’s economic state is still facing a crisis. A student, Ziauddin, 24, travelled more than 12 hours to attend the protest demanding the PM to resign, saying that the Pakistani people “are badly affected by the rise in prices” and that “everything is getting more expensive.”

According to the Pakistan Bureau of Statistics, consumer price inflation was recorded at 11.4 percent in September, as inflation continues to rise in the country.

The economic growth of Pakistan has also been slowing down. Khan’s party has been finding it difficult to prevent the widening fiscal and current account deficits.

Many people have questioned the motives behind the protests. Some analysts have suggested that Fazl-ur-Rehman has different intentions behind the marches. The leader of JUI-F has been a part of the government for many years until he lost his seat last year. The columnist Arifa Noor wrote: “He’s been left out of a game and he thinks he’s been cheated out of his rightful place.”

The letter acts as a pivotal reminder in this current situation. In the letter the Shaikh reminds of the great responsibility that Allāh (subḥānahu wa taʿālā) has placed on Imran Khan. The Shaikh also advised Pakistanis to remain patient and insisted that their leadership will be full of challenges, hardship and struggle.

Shaikh Haitham also highlighted that everyone is aware that the superpowers on the global stage today are not interested in seeing stability and truly independent developments in Pakistan, and that we should take heed from this. To read the Shaikh’s full letter click here.

2019-11-03
Hamad Momin
Previous: Unscripted #26 | Caliphate, Democracy and Brexit with Sh Haitham
Next: Racism in the UK Runs Much Deeper than Brexit