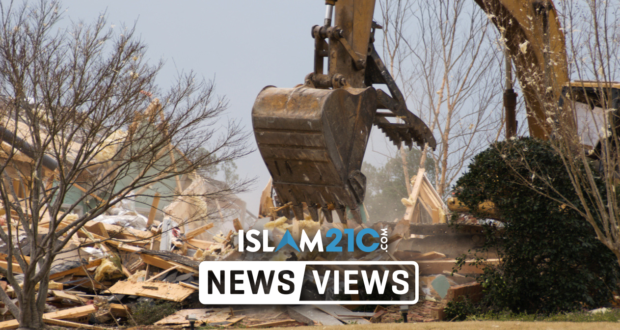 Supreme court rejects families’ appeal of discrimination by the municipality but gives permission for illegal settlers to build their homes on Palestinian land.

The ‘Israeli’ supreme court has ordered the demolition of homes belonging to 500 Palestinians in the occupied East Jerusalem after rejecting the families’ appeal, whilst also allowing illegal settlers to build their homes on Palestinian land.

The court upheld the demolition order based on a claim by the municipality that the Palestinian homes were built in the peace forest in the Abu Tor neighbourhood without building permits. The Palestinians argue that the occupation’s stringent laws regarding the building of Palestinian homes meant they were forced to build without permits.

Walid Shweiki, a resident in the occupied city, said:

“It’s not that we didn’t want to obtain a building permit, they [Israeli authorities] wouldn’t allow us to. Your family grows, you have a wife and children. Where can you go and live? On the street? You need some place.”[1]

Furthermore, two weeks prior to the ruling, the municipality attempted to change the zoning area of the peace forest in the neighbourhood so that Elad, an ‘Israeli’ organisation that transfers illegal settlers onto Palestinian land, would not have to destroy its illegal buildings. However, the municipality later granted Elad permission to maintain its illegal structures.

“The Jerusalem municipality sees great importance in carrying out city zoning plans, alongside law enforcement against illegal construction,” a statement from the municipality read, further stating that Elad’s plans of building illegal settlements and maintaining existing ones did not conflict with the law, as the land was for leisure and sports activity.[2]

The consequences of such a ruling mean that 500 Palestinians will now become homeless whilst illegal Jewish settlers will take their land. Moreover, with the re-election of the far-right Benjamin Netanyahu, the oppression handed down to the Palestinians by the occupation is set to intensify, as Netanyahu has promised to annex the few remaining homes in the occupied West Bank that belong to the Palestinians. He is also set to form a coalition with extreme right-wing parties who want the expulsion of Palestinians from all occupied land.

All ‘Israeli’ settlements in the West Bank are illegal under international law and have received unanimous condemnation from the international community, including the United States, the state’s closest ally.[3] The Oslo Accords, signed between Palestine and Israel in 1995, specifies that the West Bank and the Gaza Strip are for a future Palestinian state.[3]

However, under the premiership of Benjamin Netanyahu, settlement building has expanded immensely, and many Palestinian villages and towns have been – and continue to be – demolished, with thousands of Palestinians becoming homeless.[2] The West Bank was captured by Israeli forces in the 1967 war and over 600,000 ‘Israelis’ now reside illegally on occupied land.[3]

2019-04-17
News Editor
Previous: Islamophobic Hysteria Continues to Engulf US Politician Ilhan Omar
Next: #NotreDame: Why is it that bricks matter more than bones in today’s secular world?