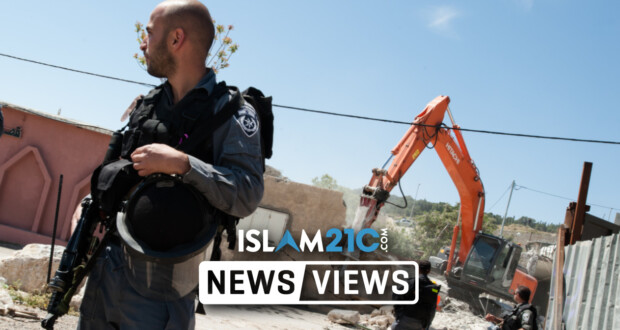 Palestinian left quadriplegic after gunshot to the neck

Haroun Rasmi Abu Aram, a 24-year-old Palestinian man, was shot in the neck by Israeli occupation forces after attempting to defend his electric generator.[1]

Moments ago, Harun Abu Aram of al Rakeez, located in the South Hebron Hills, was shot by #IDF forces as he attempted to prevent his property from being confiscated. Israeli soldiers had entered the area in order to confiscate a generator belonging to the victim of this violence. pic.twitter.com/gyzmr6JX9W

The above video footage of the incident appears to show the young Palestinian man barefoot and gallantly attempting to prevent the Zionist forces from stealing his critical piece of hardware that he was using to support a neighbour with some construction work.

In an article by the Middle East Eye, the Israeli human rights group B’Tselem stated that Israeli troops had demolished Abu Aram’s home just over one month earlier, on 25th November 2020. This recent heinous attack on Abu Aram is even more appalling as occupation forces had already left him homeless.

According to a statement released by B’Tselem on Friday:

“The soldiers arrived with the intention of confiscating equipment that the family was using for the construction, including a generator… Abu Aram was shot in the neck from a close distance as he and other Palestinians were attempting to retrieve the generator from the soldiers.” [1]

The Zionist forces allegedly even went so far as to target the vehicle of another Palestinian civilian who was attempting to remove the severely wounded Abu Aram from the scene and on to urgent medical treatment.

The resident of al-Rakeez, situated in the South Hebron Hills, is now quadriplegic (paralysed from the neck down) after being shot in the neck. According to the Palestinian Health Ministry, Abu Aram is in critical condition and on life support in hospital.

This event shines the spotlight on the hypocrisy of the Israelis in denying Palestinians in the West Bank the right to build homes in their homeland, even though this has arguably been robbed from them under the Oslo Accords.[2]

According to an article by The Times of Israel:

“Palestinians counter that Israel rarely issues permits for them to legally build in Area C. Around 200,000 Palestinians live in the zone, where the Oslo Accords grant Israel full civilian and security control — including over construction. But between 2016 and 2018, according to data released by the Civil Administration to the Bimkom rights group, only 1.4% of Palestinian requests for permits were granted.”[3]

Research by B’Tselem found that the Israeli occupation forces have been estimated to have razed over 900 Palestinian homes in the West Bank and occupied East Jerusalem in 2020 alone.[4]