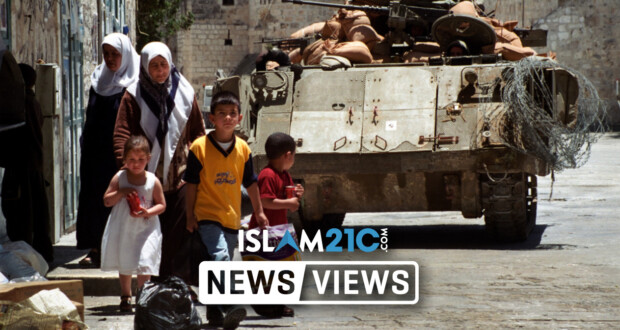 Palestinian teenager dies after being tortured by IDF soldiers

Another innocent Palestinian has died at the hands of the Zionist regime’s brutal military forces.

Amer Abdel-Rahim Sanouber, an 18-year-old boy from the village of Yatma in the northern West Bank, passed away early on Sunday after fleeing from occupation troops. Sanouber had sustained horrific injuries from Israeli soldiers who inflicted a devastating and brutal beating on his neck.[1]

Breaking | A Palestinian teenager was killed early today morning after he was severely beaten by Israeli occupation soldiers near the village of Turmus-Ayya, to the northeast of Ramallah in the occupied West Bank. He was identified as Amer Abdulrahman Snobar, 18. pic.twitter.com/7sIj7qxdUj

Various Palestinian news agencies reported that Sanouber was viciously assaulted by IDF (Israel Defense Forces) soldiers, who used the butts of their rifles to beat the 18-year-old near the town of Turmus Ayya.

Al-Araby reported that when questioned about the event, the Israeli army states that troops had responded to an incident north of Ramallah after rocks were thrown at an army vehicle.

“Initial details suggest that upon the arrival of the troops… the two suspects tried to escape by foot… While fleeing, one of the suspects apparently lost consciousness, collapsed and hit his head. The suspect was not beaten by IDF troops.”[2]

This common line is spouted repeatedly by the IDF after carrying out regular raids in occupied areas. A stone or pebble allegedly thrown in the general direction of an army vehicle (which has absolutely no right to be in the area that is illegally being occupied by Israel) is responded to by soldiers “bludgeoning” a defenceless boy who may have been expressing his justified emotions at the continuous raids and presence of foreign troops in his homeland. How anyone can suggest that this is an appropriate response to an alleged hurling of stones at an army vehicle is impossible.

In a statement, Hanan Ashrawi, a senior official of the Palestine Liberation Organisation accused Israeli troops of “a monstrous act of brutality against a defenceless young man whose only crime was being Palestinian”.[3]

An 18-year-old Palestinian has reportedly died after receiving blows to his neck by Israeli soldiers pic.twitter.com/HjWmKuyL9a

It is ludicrous for the IDF to suggest that by collapsing and hitting his head, the late teenager somehow received various injuries on his neck. This is completely inconsistent with the report of Ahmed al-Bitawi, director of the Palestine Medical Complex, who confirmed that Sanouber died because of injuries sustained from an attack by Israeli soldiers. “There were visible signs of beatings on Sanouber’s neck,” said al-Bitawi. The Palestine Medical Complex stated that the injuries to Sanouber’s neck were consistent with trauma inflicted from the butts of the Israeli soldiers’ rifles.[4]

A quick Google search of fatalities at the hands of IDF forces returns countless articles, many of which are recent. Brother Amer Abdel-Rahim Sanouber is the latest among many thousands who have died at the hands of the Israeli military.

May Allāh (subḥānahu wa taʿālā) accept Amer Abdel-Rahim Sanouber (raḥimahu Allāhu) and all those who have been killed unjustly as martyrs, grant them Jannat al-Firdaus and bring about much greater good for their people in this world and the next. Āmīn.

2020-10-26
Shaheer Choudhury
Previous: An Artist’s Life: Through A Dusty Lens
Next: CCIF announce they no longer feel safe defending human rights in France