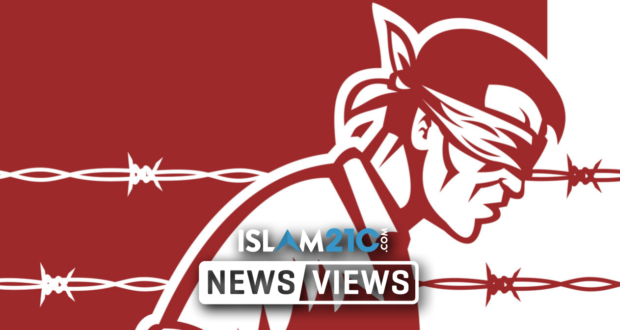 A Palestinian teenager was reported to have been shot by ‘Israeli’ occupation forces whilst blindfolded and handcuffed.

16-year-old Osama Hajahjeh was walking home from a funeral and was unarmed when occupation forces arrested and detained him. Hajahjeh was then blindfolded and handcuffed.

However, due to the aggressive behaviour by the soldiers, who confused the teenager by shouting at him in both Arabic and Hebrew, Hajahjeh began to walk away. It was at this point that the soldiers opened fire and shot him in his thighs.

A statement from the Palestinian news agency, Wafa, said:

“A Palestinian youth was seriously injured today in the southern West Bank town of Tuqu when shot in the thigh by Israeli soldiers, according to a local official and Palestinian security sources.”[1]

Following the funeral prayers for a woman, who was martyred earlier in the day when an illegal settler deliberately ran her over, residents of the town began a demonstration against the injustice by throwing stones at the occupation forces, who responded with rubber bullets and tear gas. The 16-year-old boy was part of this demonstration.

“The soldiers fired rubber-coated metal bullets as well as teargas and stun grenades at the protesters injuring a 16-year-old boy in the thigh by a live bullet. He was taken to a hospital in Bethlehem.”[1]

Hajahjeh’s injuries have been described as critical, according to the news agency, as the bullet hit a main artery, causing heavy bleeding.

B’Tselem, an ‘Israeli’ human rights group, said the shooting was part of a series of unjustified shootings against Palestinian teenagers, and that ‘investigations’ into these shootings rarely result in any punishment for the perpetrators.

“Like the previous four cases we investigated, this is an example of Israel’s reckless use of lethal fire, and the fact that the human lives of Palestinians count very little in the eyes of the army.”[2]

The organisation also reported that four Palestinian teenagers have been killed since March 2019.[2]

Palestinian youth regularly stage demonstrations in the occupied West Bank against the illegal military occupation and the mass injustices and oppression committed by ‘Israel’. The occupation forces respond to the unarmed youth with bullets and tear gas, which kill and injure many – an example of just how little Palestinian lives matter to them.

With the re-election of the far-right Benjamin Netanyahu, Palestinian oppression by the occupation is set to intensify. He has promised to annex the few remaining areas of the occupied West Bank that belong to the Palestinians and is set to form a coalition with far-right parties who want the expulsion of Palestinians from all occupied land.

All ‘Israeli’ settlements in the West Bank are illegal, and these have received unanimous condemnation from the international community including the United States, ‘Israel’s’ closest ally.[3] The Oslo Accords, signed between Palestine and ‘Israel’ in 1995, specifies that the West Bank and the Gaza Strip are for a future Palestinian state.[3]

However, under the premiership of Benjamin Netanyahu, settlement building has expanded immensely, and many Palestinian villages and towns have been – and continue to be – demolished, with thousands of Palestinians becoming homeless. The West Bank was captured by ‘Israeli’ forces in the 1967 war and now, over 600,000 ‘Israelis’ reside illegally on occupied land.[3]

As Netanyahu’s plans to annex remaining areas in the West Bank proceed, there will certainly be more demonstrations by the Palestinians, and as a result, lead to more casualties. The 16-year-old teenager is just one of many lives who remain unimportant in the occupation.