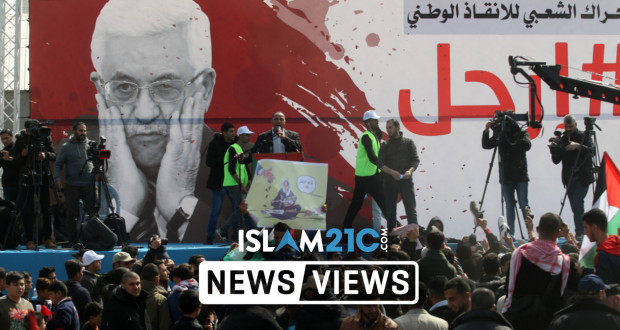 Momentum is building against the traditional political rulers of the West Bank, who are strongly perceived to be illegitimate and working in tandem with the Israeli occupation. Hundreds of Palestinians continue to protest in the streets against the unpopular political administrator of the West Bank, the Palestinian Authority (PA). The PA is led by Mahmoud Abbas, whose questionable tenure as president has exceeded 16 years, with no indications that he is willing to step down soon. The PA’s use of plainclothes security forces as a way to quell these protests has also alarmed the international community. [1]

Chants of “the people want the fall of the regime”, and “Abbas, leave”, could be heard in the recent wave of protests. The anger of protesters was evident, as the 85-year-old Abbas – nicknamed Abu Mazen – continues to maintain a stranglehold over the administration of the West Bank. In 2021, parliamentary and presidential elections had been planned for the early part of the year. However, without proper justification, Abbas claimed in the very last minute that the vote would need to be postponed due to issues with voter rights in Israeli-occupied East Jerusalem. [2]

There is now an even further protracted and unresolved crisis of leadership in the war-torn state of Palestine, as hundreds of protesters in the city of Ramallah are demanding the immediate resignation of Abbas. Demonstrators are furious at the shocking death of the well-known activist and PA critic, Nizar Banat. Banat was arrested by PA security forces, and subsequently died while in custody. On July 1, both the justice minister and official in charge of the investigation committee studying Banat’s death acknowledged that the late campaigner’s demise had been “unnatural”. Mohammed al-Shalaldeh concluded that the cause of Banat’s death was in fact neurological shock, which subsequently led to acute heart and pulmonary failure. Criminal investigations are expected to be soon initiated. Regarding the prospects for an investigation, al-Shalaldeh confirmed that the report is now in the hands of PA Prime Minister Mohammed Shtayyeh. [3]

There is also the recent example of Tariq al-Khudeiri, a young activist who was arbitrarily detained by PA forces and subjected to a severe beating characterised as “visceral anger and depravity”.

In an interview, al-Khudeiri described the disturbing sequence of events to reporters:

“The preventative security forces called my father’s mobile phone last Saturday and informed him that he and I need to both be present for a ‘friendly’ 10-minute chat at their headquarters…They promised that my father and I would go home together.

“All of a sudden, without telling me anything, I was bundled up in a car and taken to the security complex [prison] in Jericho…They threatened to hang me by my hands – a form of torture known as shabah – and assaulted me physically and verbally. They handcuffed my hands behind my back and blindfolded me and made me sit for long hours on a low chair with no back.” [4]

Moreover, the PA has been repeatedly criticised for its increasingly authoritarian style of rule. Citizens are angry that Abbas cancelled the recent round of elections, under the pretext of alleged concerns surrounding voting rights. In reality, the reason for the cancellation was that his Fatah party appeared highly unlikely to win in the planned 2021 elections.

Al Jazeera’s English-speaking Ramallah correspondent Nida’ Ibrahim reported that during Saturday’s Ramallah demonstrations, there were no indicative signs of a police presence. However, she did report the following piece of disturbing information that was related to her:

While the rallies in Ramallah took place, a counter demonstration in the PA’s favour was held in Hebron. The PA’s official television station, Palestine TV, restricted its analysis to the counter demonstration and pretended that the Ramallah rallies simply did not happen. This is simply an extension of the approach that Fatah’s Abbas has chosen to take, namely ignoring the legitimate wave of opposition that is forming against the old party. Likewise, by starting a counter rally instead of addressing the fierce political divide that continues to plague Palestine, the PA is taking a leaf out of Abbas’ book by using any means necessary to remain in power. The PA has failed to engage in dialogue with its opponents. Furthermore, it has exerted no efforts to reschedule elections in order to ultimately bring about at least a semblance of national reunification.

Show of force by Fatah in Hebron. Counterprotest to Nizar Banat demo in Ramallah. pic.twitter.com/metJXyYGZs

With a dramatic rise in detentions and reported torture of PA opponents, it is no surprise to see rallies being met with firm police pushback. Multiple women, including journalists and members of international human rights organisations, have accused security forces of sexual assault and singling them out for abuse due to their gender.

Indeed, the United Nations High Commissioner for Human Rights Michelle Bachelet made the following shocking observations in a July 1 press release: “During one of these protests, one of our staff members monitoring it was punched and pepper-sprayed by a person in civilian clothing.” [5]

Bachelet continued her statement by adding the following remarks:

“Many people, including journalists, and human rights defenders were similarly assaulted. This interference in our work in Palestine is unprecedented. It is crucial that independent investigations are carried out to hold the perpetrators accountable.

“We have also witnessed and received credible reports of specific targeting of women present in the demonstrations – women protesting, reporting for media or merely bystanders.”

The UNHCR statement also shed light on the deliberate and unacceptable targeting of women at anti-PA protests:

“Bachelet added, noting that many women reported being sexually harassed at demonstrations, had their mobile phones confiscated or stolen, and reported being summoned by the Palestinian Security Forces. There have been threats, including death threats, and harassment, including of sexual nature, against them on social media.” [5]

The Commissioner for Human Rights called for a swift end to any such targeting, by issuing the following ultimatum:

“We call for an immediate end to any gender-based targeting, harassment, threats or violence and call on the Government to ensure the safety and security of all without discrimination.” [5]