Parents should not take children out of RE lessons over Islam, say headteachers 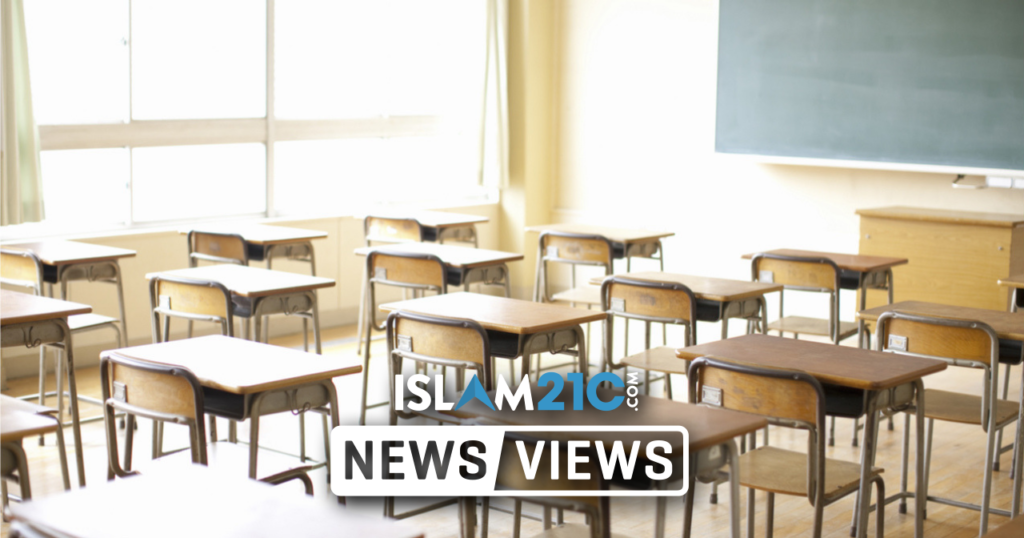 Children should not be taken out of RE lesson, headteachers say, as a study reveals multiple withdrawal requests over lessons on Islām. [1]

The study, conducted by Liverpool Hope University, included 450 school leaders and RE teachers and revealed that 41% of these teachers had received requests to withdraw children out of lessons on Islām. [2]

Teachers implied that the requests received were from those who represented a “hostility and intolerance to those of other faiths”, although the research concluded that the reasonings behind some withdrawals could be seen as “misunderstandings” as opposed to prejudice. [1] This being said, 71% of teachers who participated in the study agreed that the right to withdraw from RE lessons is “no longer required”. [2]

According to one teacher:

“The students that have been removed are the ones that need to understand different cultures the most.” [1]

The results of the study do not come as a surprise. In April 2018, it was revealed that parents – reportedly those who were Islamophobic and anti-Semitic – were “abusing” the right to withdraw their children from RE lessons. Then, in January this year, a SACRE report to the council revealed there were “integration issues” in Thurrock after parents objected to lessons on Islām and even withdrew children from “visits to places of worship”.

As there may evidently be cases where parents abuse the right to withdraw, questions have been raised as to whether parents should have any input in their children’s education, especially when it comes to RE and RSE. The current law regarding the withdrawal from RE, as established in the 1944 Education Act, is that parents have the right to request for their child to withdraw from RE and collective worship. This was to protect the “rights of conscience of religious minorities from being forced to receive Christian religious instruction”. [3]

However, there has been scrutiny over the appropriateness of such a law. 27% of Liverpool Hope University’s study participants believed parents had to provide an alternative curriculum for children who withdrew, whereas others thought children could be removed from other subjects on “religious grounds”. [3]

To have such a law in place upholds the rights of parents, who may wish to bring their children up with their own religious beliefs. According to the Children Act 1989, parents have the right to make important decisions regarding their children’s upbringing – i.e. health, education, and religious upbringing – until the age of 18. [4] It could be said that taking away this right would, in effect, take away the parents’ right to being involved in their child’s education.

Furthermore, one might wonder what would happen when the right to withdraw has been taken away.

Protests in Birmingham have been national news for several weeks as parents at two out of 258 primary schools in the city have been accusing their schools of transgressing their parental rights over the teaching of sensitive topics on sexual morality and ethics. Their local MP, Roger Godsiff, criticised the schools in Parliament on Tuesday for failing to consult the parents like the vast majority of schools in the city had done, which saw no protests.

Position Statement: What Muslim parents are really protesting about in Birmingham

There have been other cases where a school assistant has been fired for raising concerns over LGBTQ+ ideology being taught to young students, [5] and a vicar has even resigned after being “silenced” to keep an eight-year-old student’s plan to change gender a secret from parents. [6]

Among the many juvenile fallacious arguments exchanged by those trolling the protesting Muslim parents in Birmingham has been “What if people protested their children learning about Islām/Muslims!?”. Well, here you have it – it has been going on for years. But more importantly, it is motivated by nothing of the sort of intentions that those protesting against LGBTQ+ ideology imposed on children.

Teaching children that there is a way of life call Islām, it has five pillars, and its adherents are called Muslims etc. is a statement of fact. On the other hand, the types of relationships a person or community regards as good or bad, appropriate or inappropriate, normal or abnormal, are not the result of hard facts, but a product of many interacting beliefs and cultural norms about, for example:

The teaching of facts is thus precisely the opposite of what Muslim parents in Birmingham have been protesting about — the “proselytising” and “indoctrination” (in their words) of sensitive moral issues as well as unscientific social constructs (like gender and sexuality) as universal facts. A less fallacious analogy would be to compare it to hypothetical lessons teaching “Islām is the Truth”, with which a Christian would understandably have an issue — a legally valid one.

The intellectual foundations of Islām resonate with an open mind so obviously that we are not in the business of indoctrinating children — let alone other people’s children — with irrational or socially constructed norms as though they are universal laws; unlike those campaigners who require a child — at the age capable of seriously believing in Father Christmas — to be convinced to believe that human beings are individuated across rigid, discrete, permanent, deterministic categories called “sexuality”, which happen to be an accidental, unscientific relic of the Victorian era, as incidentally refuted by Queer Theory itself today.

All we do is nurture the fitrah (natural disposition) of a child to worship the One they already have what epistemologists call a “properly basic belief” in; [7] learn and critically use their intellects—echoing the Qur’anic injunction given hundreds of times to ‘think’, ‘reflect’, and use the faculty of the ‘ʿaql’ bestowed on us that taklīf (moral accountability) itself is contingent upon; and importantly, to question manmade assumptions and constructs inherited over generations.

“And when it is said to them, “Follow what Allāh has revealed,” they say, “Rather, we will follow that which we found our fathers doing.” Even though their fathers understood nothing, nor were they guided?” [8]