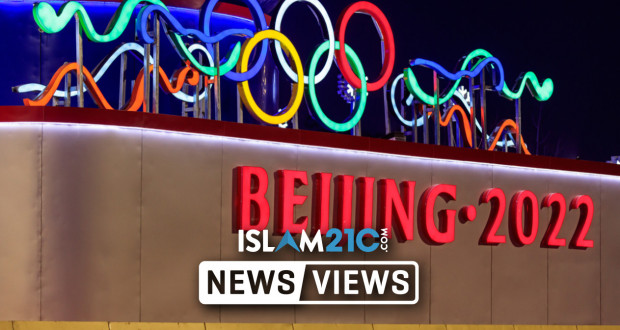 After the European parliament last Friday overwhelmingly passed a motion calling for diplomatic officials to boycott the 2022 Beijing Winter Games, the United Kingdom’s own House of Commons is to host a critical debate regarding the matter on Thursday. This special session will consider a motion which proposes that all British athletes boycott the upcoming Games in February. [1] [2]

Islam21c calls upon all readers to take part in grass-roots action by engaging in a show of strength against the Chinese Communist Party’s abhorrent treatment of the Uyghurs. Search for your local MP here, and request them to vote in favour of the motion.

Campaigners of Uyghur rights have in the past aptly called the sporting extravaganza the “Genocide Games” on account of the oppressive and brutal nature of the ruling Chinese party’s policies. The regime has been responsible for committing a horrifying genocide against the Uyghurs, as well as other Turkic Muslim minorities in the region of East Turkestan (referred to as Xinjiang in Chinese media). [3]

Millions of Uyghurs, alongside numerous members of the Hui, Uzbek, Kyrgyz, and Tajik communities are believed to be in concentration camps. The unbridled and forced sterilisation of females, the vicious torture and sexual abuse of both men and women, and the disturbing exploitation of Muslim minorities as slave labourers in clothing factories, cotton fields, and high-technology production plants are all atrocities which have alarmed the world. [4] [5] [6] [7]

ACTION ALERT: Tomorrow -15 July- MPs are voting on a motion to boycott the #WinterOlympics in Beijing.

Tell your MP to stand against the #UyghurGenocide and support this motion to stop our Govt sending representatives to Olympic Games happening in a country accused of Genocide. pic.twitter.com/8Vo9JOZnXx

Find out who your MP is & their contact details via 👉https://t.co/rJsOQ1nT3R

Email, call & tweet them to vote in favour of boycotting the #WinterOlympics tomorrow.

Beijing – the capital city of the People’s Republic of China – was selected in 2015 as the host nation of the 2022 Olympic Winter Games, just ahead of rival Kazakhstan’s proposed city of Almaty. By clinching the top spot, Beijing has now become the first city to be awarded both the Winter and Summer Games.

On the same day of the International Olympic Committee’s (IOC) decision to approve Beijing’s bid for the 2022 Games, words of condemnation were expressed. Sophie Richardson, the China director of Human Rights Watch, described it as being a “slap in the face”.

In her statement, Richardson suggested how the IOC’s appalling decision turns a blind eye to the numerous human rights violations that the Chinese regime is implicated in:

“The IOC’s awarding of the 2022 Olympics to China is a slap in the face to China’s besieged human rights activists. Over the next seven years, the IOC has enormous work to do in China to win the credibility on human rights that will ensure a successful Olympics.” [8]

In the blistering statement, Richardson also heavily chastised the Chinese government, suggesting that the IOC had made a massive error of judgment in awarding the Games to China:

“The Olympic motto of ‘higher, faster, and stronger’ is a perfect description of the Chinese government’s assault on civil society: more peaceful activists detained in record time, subject to far harsher treatment…In choosing China to host another Games, the IOC has tripped on a major human rights hurdle.” [8]

Global momentum has been shifting in favour of the Uyghurs, despite China’s desperate attempts at whitewashing the entire human rights scandal. The recent Stand4Uyghurs demonstrations in London, which were primarily organised by Islam21c and took place on July 1, saw record numbers in attendance. Dr Salman Butt, Chief Editor of Islam21c, described the unprecedented event as being “the biggest demonstration for Uyghurs ever held by non-Uyghurs…in the world.” [9]

Moreover, prominent states such as Canada, the Netherlands, the US, and more recently the United Kingdom have had their respective executive or legislative bodies declare China’s actions against the Turkic Muslims of East Turkestan as being a clear-cut “genocide”. [10] [11] [12]

In addition, three days of evidence-gathering early in June at the Uyghur Tribunal saw damning first-hand evidence produced against the CCP, with survivors of torture and detention sharing their terrifying experiences at the hands of police and security services. It is now more important than ever to continue applying steady pressure to the British government, the international community, and China itself, in order to prevent any further oppression against the Uyghurs. [13] [14] [15]

It is of paramount importance that we remain unrelenting in our push to see our Uyghur brothers and sisters given a safe and secure future devoid of oppression, brainwashing, or genocidal policies. The British government has previously hinted that it would boycott the 2022 “Genocide Games”. In October 2020, Foreign Secretary Dominic Raab informed the Foreign Affairs Select Committee that “egregious human rights abuses” had been perpetrated by the CCP. However, in a reflection of how quickly politicians can change course, Boris Johnson in February of this year rejected calls for any boycott. Thus, it is vital that we petition our local MPs and encourage them to vote in favour of today’s motion. [16] [17]

Search for your local MP here and petition them to vote in favour of the motion.